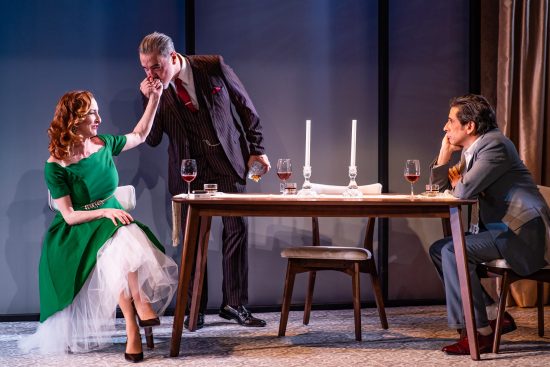 “La Casa de la Laguna” (“The House on the Lagoon”) at Gala Hispanic Theatre is a passionate play—  intense and fascinating. Between the political underpinnings and the lives of the family on which it is focused, we learn that the political is personal. It’s not just a game and their personal world will end in fire.

…a deep dive into the class and political divides of Puerto Rico. It’s worth every moment spent experiencing it…heartbreakingly human.

We are introduced to the younger couple, Isabel (Yaiza Figueroa) and Quintin (Ernesto Concepción), when they meet on a beach in Puerto Rico. Her necklace is snatched by a street thief. He pursues him and returns the necklace to Isabel. They are both studying at colleges in New York and eventually fall in love. This doesn’t sit well with Quintin’s father, Buenaventura (Juan Luis Acevedo), because of the differences in class and political beliefs. The two marry and eventually move to an apartment in Puerto Rico. Isabel loves their life in the apartment. She is writing. She is part of the energy of the city and can be more politically progressive in the city.

Then Quintin moves them to his parents’ house, Casa de la Laguna, telling her it is easier to help run the family business from there. As she gets along well with his mother, Rebecca (Luz Nicolás), who used to write poetry, this move will makes things easier. Over time, Isabela watches Quintin become more conservative like his father and grows resigned to their life at the house. Buenaventura dies in a supposed housebreaking and robbery. Rebecca runs the company until she dies and Quintin finally has the chance to expand the business into a multi-national corporation. He grows more ruthless and controlling as he ages and amasses more wealth and power.

But the political strife in Puerto Rico is not static. The population is torn between becoming a state of the United States (many feel like they have the boot of colonialism on their necks) or being an independent nation. Isabel and Quintin’s son, Manuel (Omar Cruz), falls in love with Coral (María Coral), a political activist, and leads a strike against his father’s business. Familial bonds are broken as is the family’s world.

Witness to all of this is Petra (Evelyn Rosario Vega), the housekeeper who raised Quintin and to a great extent, Manuel. She had worked for the family since Buenaventura started the company. Vega shines in this role. She uses her physical presence to indicate the passing of years subtly and most effectively. The final confrontation between her and Quintin is, in some ways, the cruelest betrayal. She represents all of the Puerto Ricans who are not of the ruling class. When she turns away from Quintin and leaves with the dignity of a queen, you expect the earth to swallow him up. It’s one of the finest performances I have seen so far this year.

All of the actors in this play do exceptionally fine jobs of portraying the cultural, social, and political forces behind their decisions and the impacts on their lives. Particularly for the two woman, Rebecca and Isabel, you feel how hard it is to try to maintain a sense of identity when a culture of machismo has shredded their sense of who they are.

Based on the novel by Rosario Ferré, the play was written for GALA Hispanic Theatre by Caridad Svich. It blends the political upheaval over approximately forty years without much sermonizing. The politics underpins everything, sometimes as a backdrop on the set of screens across the back of the stage, but is mostly seamlessly insinuated into the personal lives of the family members. Director Rebecca Aparicio wisely uses a light touch so that the history lessons we are quietly fed don’t overwhelm—they are made more vivid through the eyes of the players.

Costume designer Jeannette Christensen has done a fabulous job with period-appropriate costumes, particularly in the women’s clothing, ranging from the 1950s to the 1980s. The upscale creep of the fashions beautifully tracks the family’s growing fortunes.

The projections designed by Kelly Colburn—from the waters of the lagoon, the beaches, the cities, and to the final wall of flames—added to the tension inherent in the characters’ lives. Germán Martínez designed the sound and Jennifer Fok was the lighting designer. Scenic designer Gerardo Díaz Sanchez provided lovely period furniture on a simple set that was elegant, yet could stand in for a hotel room, and the living and dining rooms of the house on the lagoon.

This play is a deep dive into the class and political divides of Puerto Rico. It’s worth every moment spent experiencing it. Go see it. It’s heartbreakingly human.

Run Time: Approximately two hours and 30 minutes with one intermission.

Advisory: Some adult language; there are screens for the English translations by Caridad Svich.