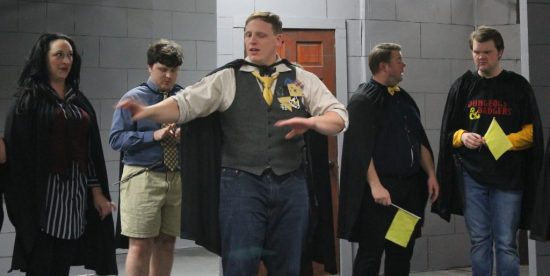 Greetings, prospective witches and wizards! Which house will you be sorted into upon your admittance to a certain school of magic? Surely, you won’t end up being a silly puff! However, there are more happenings afoot. A particular student with the last name Potter just keeps bringing utter mayhem to this fine institution each year that you attend. Whatever is a young(ish) wizard to do? Why, go see the Newtowne Players’ (NTP) newest production of the Harry Potter (HP) fan-favorite parody play, “Puffs,” of course.

This is a first in my community theatre experience, but I wish I could return to see the show once once more…marvelous direction…

As a casual HP fan, I’ve only seen the movies three times (and one of those instances specifically to prepare for this show) and never read the books. This production allows even those not as entrenched in the fandom to be in on the fun. Add a ridiculous amount of physical comedy, and you’ve got a recipe for an exceedingly palatable potion of enjoyment.

“Puffs” was originally written by Matt Cox in 2015, with its final iteration produced off-Broadway in 2017. It was wildly successful and currently has a Mexico-bound production in the works. It has also become a favorite of community and children’s theatre. The basic story follows an American named Wayne Hopkins who receives his invitation to a certain school of magic. Once he arrives, he is sorted into the quirkiest of houses—the Puffs. This show begs the question, what would it have been like to be a student at Hogwarts while everything that occurred during the HP series unfolded? The answer it provides is hysterical mayhem. While the play definitely caters to the HP fan, the amount of physical comedy lends itself well to a broader appeal.

Tessa N. Silvestro brilliantly serves as both the director and set designer. What I love about shows like this is that the set design is complex in its simplicity. Silvestro’s design consisted of an elevated stage at the center of the main stage, with sliding badger-adorned doors (allowing for some spectacular entrances and exits) and two doors on each side of the smaller stage that displayed the four houses’ respective colors. The various levels and dimensions brings a much needed depth to the staging that was quite pleasing to the eye.

From start to finish, Silvestro’s direction keeps the story clicking along at a brisk place. For most theatre-goers, it’s common to occasionally get distracted, even during a solid production. At no point during this show did this happen. Silvestro creates an all-encompassing, thematic experience filled with laughter and joy. Everything—from the use of mops to portray Hermione and Ron, the spot on casting, to the thoughtfully added character and relationship-driven moments—felt like a glorious labor of love. This is a first in my community theatre experience, but I wish I could see the show again, just to witness the marvelous direction once more.

While the entire cast earnestly plays each of their numerous characters with such passion and humor, there were three actors of note—Brandon Maher as Wayne Hopkins, Piper Philyaw as Susie Bones/Harry/Colin/Hermeoone #2/Ric Gryff,/Myrtle and Jonathan Berry as Cedric/Mr. Voldy. Maher creates a likable and relatable conduit for the audience as he journeys through the silly landscape of the story. He was believable every step of the way with his boyish grin and optimism, while allowing the jokes around him to further enhance his performance. Philyaw absolutely killed it as the infamous Boy Who Lived (HP reference). Her devil-may-care attitude and smug voice for his character had me in stitches. According to her bio, this show was her first time performing out of high school. If this performance is any indication of her talent, she has a bright future ahead in theatre.

In Johnathan Berry, I have found a new favorite actor in the Southern Maryland theatre community. I saw him in “Julius Caesar” at NTP in 2019. For as skilled as he is in drama, he further excels in a comedic production. His characterization of Cedric in Act 1 brought a fun, humble brag quality to the character that worked very well off the character he was parodying. In Act 2, he played a side-splitting version of Voldemort (Mr. Voldy in this play). Berry could have gone the easy route of giving Mr. Voldy the gravelly voice heard in the HP films. Instead, he gives a sassy, almost drag queen level of energy to the character.

NTP’s production of “Puffs” is a breath of fresh air. What makes this show such a wonderful night of theater is its broad appeal. It offers an abundance of fun and laughter that is sure to lift spirits in these sometimes grey, winter months.

Approximate run time is 1 hour and 45 minutes with one 10-minute intermission.

Advisory: 14+ for suggestive themes and language.

In accordance with current CDC recommendations, NTP is currently requiring the use of masks for all patrons.