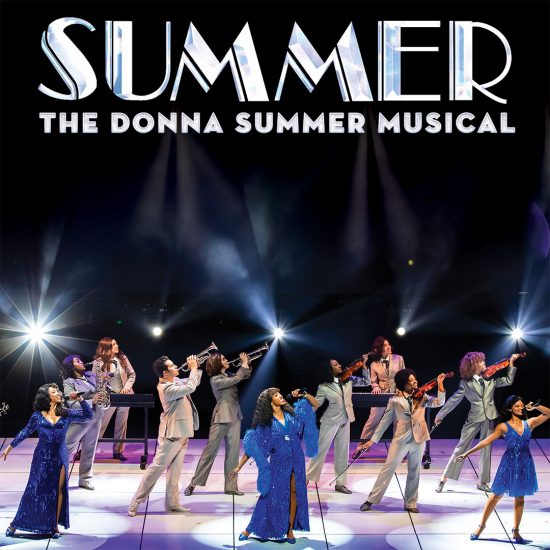 The cast of SUMMER: The Donna Summer Musical. Photo courtesy of Hippodrome Theatre.

The Queen of Disco is paying a visit to Baltimore this week in the form of the jukebox musical, “SUMMER: The Donna Summer Musical” at the Hippodrome Theatre. Sadly we lost Summer too early in 2012 from lung cancer but she was one of the most successful music artists in history, winning five Grammys and 42 hit singles on the US Billboard Hot 100. In 2013, she was posthumously inducted into the Rock and Roll Hall of Fame. “SUMMER” opened on Broadway in April of 2018 and closed at the end of the year. (As a side note, Ariana DeBose, this year’s Oscar nominee for her role in “West Side Story,”  was nominated for the Tony Award for Best Featured Actress in a Musical for her role as Donna Summer, as was LaChanze).

The show follows in the footsteps of other biographical jukebox musicals that have exploded since the penultimate, “Jersey Boys,” became a multi-award-winning  hit  that ran on Broadway from 2005 to 2017. (It is still running off-Broadway and touring.) Though some of the same talent is involved, the production unfortunately runs a bit short, literally and figuratively. Like the “The Cher Show” that premiered on Broadway in June of the same year, the show uses three different actors playing the main character at different times in her life—Donna Summer in her pre-teens in Boston (Amahri Edwards-Jones as Duckling Donna/Mimi); her rise to fame as a young adult (Charis Gullage as Disco Donna); and finally in her 50s (Brittny Smith as Diva Donna and her mother, Mary Gaines), having attained fame. It also utilizes the “Jersey Boys” structure: face pace; minimal set; set pieces brought on and off stage by the cast; quick scene changes; and a screen in the back for projections. It was deja vu (as it was in “Ain’t Too Proud: The Life and Times of The Temptations” which came to Broadway in 2019) but not with the same emotional impact.

The story is not linear—it goes back and forth in time to tell Donna Summer’s story. Like the above mentioned shows, Diva Donna breaks the fourth wall as she invites the audience into the story and join in by singing and dancing if the spirit moves. The other Donnas also interact with the audience and each other. We see Donna view herself as an ugly duckling in a deeply religious family. We later learn she was molested by the minister of the church where she loved to sing. She performed and lived in Germany in a production of “Hair” where she also married, had a child, and divorced. Two producers based in Germany helped start her on the road to success. She was convinced that Mimi should be raised by her parents temporarily as her star was rising. She also dealt with domestic abuse. When Summer finds out she’s broke because her record company, headed by the husband and wife team of Neil Bogart (Christopher Lewis) and Joyce Bogart (Aubrey Young) of Casablanca Records, took advantage of her financially, she takes charge and gets her own contract with David Geffen and his new record company. Though “blue pills” are mentioned, it doesn’t go too deeply into the issue of her drug use though her siblings come to her rescue and telling her she needed to get back to her religion. We see her concern that she wants to be taken seriously as a singer, not just the Disco Queen, but she eventually embraces it—and there is so much more that she accomplishes.

The love story gets lots of creative license—surprising since her husband was a story consultant. In the musical, Donna finds love with a studio guitar player, Bruce Sudano (John Guaragna), during a recording session when he stands for a singer in the duet, “Heaven Knows.” Thought at times funny, the car scene is very odd and unwieldy. (Again, more successfully done in “Jersey Boys.”) The real story and Sudano are more interesting. Donna’s marriage to Bruce and the two additional children brought her great joy, as did painting. Then came the cancer.

At one hour and 45 minutes, the show does not allow for much depth for the characters. They, as does some of the dialogue, sometimes feel cartoony or cliché despite the best efforts of the cast. It appears that corners may have been cut a bit for the tour—one example being the ensemble dealing with bad wigs.

What makes this musical worth the price of admission are the three Donnas and their powerful voices—and, of course, the great music—”Love to Love You Baby,” “Hot Stuff, “MacArthur Park,” “Bad Girls,” “On the Radio,” “She Works Hard for the Money,” and so many more. To the audience, a rainbow of colors and ages, it was a huge-crowd pleaser—and they did indeed get up and join in the “Last Dance.”

“SUMMER: The Donna Summer Musical” runs through February 20, 2022 at the Hippodrome Theatre, The Frances Merrick Performing Arts Center, 12 N Eutaw Street, Baltimore, MD 21201. For information about tickets and the Broadway season at the Hippodrome, click here. Masks, ID, and proof of vaccination are required.