Theatre Review: ‘Trans Am’ at The Keegan Theatre 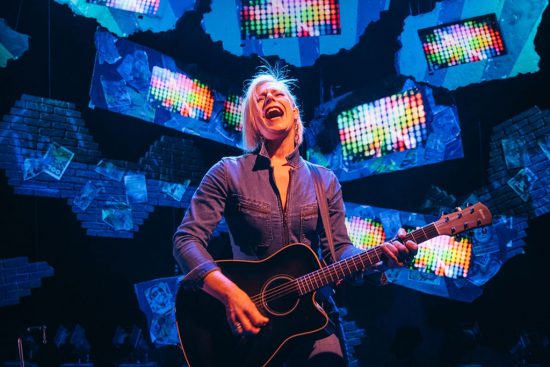 People contain multitudes, which is why telling the story of oneself can seem so daunting. It’s a challenge that “Trans Am,” a one-woman, autobiographical rock musical, meets with startling brashness. Lisa Stephen Friday, the creator and sole performer, helms the live, world-premier production, which itself contains multitudes. It’s an exhilarating synthesis of musical, punk rock concert, and stage play.

An earlier version of the show premiered, live-streamed in the fall of 2020. While that incarnation was sensational, the new, in-person staging heightens the drama and intensity of Friday’s performance, from the very first drumbeats that you can feel through the floor as she walks onstage. Starting from the beginning, Friday tells us her history, through stories and songs (from Lisa Jackson & Girl Friday, the band which she led in the early 2000s). Growing up in Fayetteville, Georgia, she talks about struggling against her family and community’s oppressive ideas about gender identity. “I was very good at being a little boy, and the world was very good at keeping me a little boy.” Her escape from this world was the guitar and MTV.

The show is underwritten by a strong design team, whose work can also be more appreciated live and in-person. Matthew J. Keenan’s set, complete with angled TV’s and vivid fuchsia stripes are a perfect habitat for Friday’s punk rock narrative. John D. Alexander’s electric lighting and dynamic spotlighting amplifies the excitement, especially during the musical interludes. The video montages projected onto the bank of TVs (courtesy of Jeremy Bennett) provide story cues, as when Friday describes her arrival in New York City as a young person looking for adventure.

Friday’s intimate storytelling in the early parts of the show is wry, casual, and frequently funny. In painting a picture of the pre-millennium New York City she encounters, she describes Times Square as “holding onto its glory days, or should I say, glory holes.”

Friday interweaves story and songs, sometimes strumming guitar as she walks and talks, sometimes acting out scenes from her life. A generous performer, she is able to not only tell, but embody the journey she’s describing. Her face glows when she talks about finding acceptance as a queer person by fellow actors, and starting to perform as the lead singer of the punk rock band, Lisa Jackson & Girl Friday.

The in-person format also allows her to show off her chops as a veteran musician and performer, getting a good call and response going with the audience during a performance of “Hey Man,” which she affectionately refers to as a “Bowie rip-off.”

The high high’s of Friday’s music career in her story give way to some low lows. Friday’s musical background may account for the great emotional pacing of the show, as well as the fact that it is directed by her former bandmate, Fred Berman. Emotions and music, become rougher and rawer as she recounts devastating upsets, including a transphobic family, and the shocking flameout of the band.

Like the best memoirs, “Trans Am” feels both deeply personal and universal at the same time. “What do you do when everything you thought you had, and thought you wanted, is gone?” Friday asks after recounting the success, heartbreak, and recovery. Her answer underlines the importance of finding, and living, an authentic life out loud.

You can read our ‘A Quick 5’ with Lisa Stephen Friday here.

Running time: About 90 minutes with no intermission.

Advisory from The Keegan: “This production includes adult language and themes, and performances will feature fog, loud sounds, and bright lights.”

“Trans Am” runs through February 26, 2022 at The Keegan Theatre, 1742 Church Street NW, Washington, DC 20036 For tickets and more information, visit their website.