‘A Quick 5’ with Actor and Playwright, Ingrid Griffith 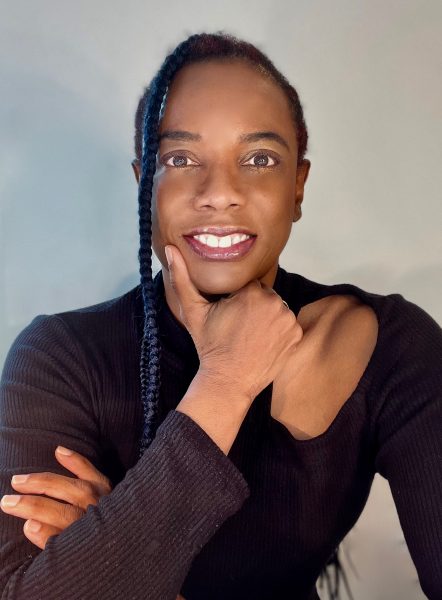 When a young playwright comes onto the theatre scene, their main goal is to get his/her play seen. Of course, who wouldn’t appreciate earning some money as well, but a play without an audience is like an unheard symphony. It just exists—it is not alive.

It is always rewarding to give some recognition to a new playwright. In this case, this a special interview, because the young playwright is a fellow alumna. We graduated four decades apart from the City College of New York. I was one of the first to graduate there with a degree in theater, so I was very enthusiastic about doing this piece.

One of her plays which she not only wrote, but also stars, is a one-woman show about the late congresswoman, Shirley Chisholm. Chisolm was an icon in New York politics and the first black woman to run for president in the Democratic primaries. “Shirley Chisolm: Unbossed and Unbowed” will be part of a group of live readings, which also includes plays about Angela Davis, Helen Hayes, and Zelda Kingoff Nordlinger, presented by New York Society for Ethical Culture on March 25th at 7 pm.

Ingrid Griffith is a member of SAG/AFTRA and the Dramatist Guild of America. She is an immigrant and a trained actor with a master’s degree in creative writing. She has been in off-Broadway and regional theatrical productions in both classical and contemporary roles. Ingrid is the writer and performer of the new solo show, “Shirley Chisolm: Unbossed & Unbowed,” a story inspired by the life and work of the political icon/trailblazer, Shirley Chisholm and the internationally-acclaimed solo show,  “Demerara Gold,”  a nostalgic, funny, and thought-provoking story of a Guyanese girl’s immigrant experience. “Demerara Gold” by Ingrid Griffith is also a published play (NoPassport Press, 2016).

“I’m drawn to tell stories about the immigrant experience, about being an outsider and daring to be one’s self. I’m interested in social norms and cultural barriers that keep girls and women down, and in stories that promote and celebrate girls and women’s empowerment.”

Griffith has been in off-Broadway theatrical productions in and around New York City. Some of her favorite roles are: Lady Reveller in the 18th century play, “The Basset Table” by Susanna Centlivre; Mrs. Muller in John Patrick Shanley’s “Doubt”; Hedda Gabler in Henrik Ibsen’s “Hedda Gabler”; various characters in Eve Ensler’s “Vagina Monologues”; Elaine Brown in Anna Deavere Smith’s “Twilight: Los Angeles”; and Mama Nadi in Lynn Nottage’s “Ruined”. For the past five years, Ingrid has been performing her award-winning and internationally-successful solo show, “Demerara Gold.”

Where were you born, grow up, attend school (including college) and anything else you might want our readers to know about you?

I was born in Guyana, South America. I lived with my parents and siblings in Georgetown, the capitol of Guyana, until my parents got visas for the U.S. They left me and my siblings in the care of our paternal grandmother who also lived in Georgetown. I was seven years old when they left.

At age 12, I rejoined my parents in the U.S. Our family lived in Wyandanch, NY, a suburb on Long Island.  Most Long Island neighborhoods are segregated. Wyandanch residents are black and brown-skinned, but the junior high school and high school I attended were made up of predominantly White students who were well off. We lived just at the edge of the Dix Hills school district. My school bus was the only one with the Black kids.

I attended SUNY Farmingdale on Long Island, earned a two-year degree there, and then got a job as an administrative assistant on Wall Street. While working in the financial district, I started taking acting classes. I caught the acting bug and was soon booking commercials and small roles. I eventually moved to the New York City and decided to finish school at City College where I earned a BA in English and a MA in Creative Writing.

“Shirley Chisholm: Unbossed and Unbowed” is a one-person show about the late congresswoman. You look a bit young to have met her or even voted for her.  What was it about Ms. Chisholm that inspired you to write about her?

I didn’t know about Shirley Chisholm until I was an adult. I vaguely remember seeing her on the covers of old magazines like Ebony and Jet, but it was when I saw a documentary about her 1972 presidential campaign run, that I became curious. I wanted to know what her life was like growing up. How did this African American woman get as far as she did — I mean she was running for President of the United States. I was in awe of Shirley Chisholm. She was clear, direct, and self-possessed. She reminded me of my great aunt, a school teacher who created a school in a rural area of Guyana. I knew Shirley Chisholm was of Caribbean heritage by the way she spoke, but not until I began my research in 2015, did I find out found out that Shirley’s mother was from Vauxhall, Barbados and her father was from Linden, Guyana, my homeland.

Your other play “Demerara Gold” is about a young girl from Guyana who immigrates to the U.S. Is the story autobiographical or based on someone you know?

Yes, the story is based on my immigrant experience. It also resonates with others who were left behind in Guyana (and other countries as a matter of fact), like me, and were waiting to get word that a visa was granted so they could join their parents overseas. Most Guyanese were searching elsewhere for a better life for their family. “Demerara Gold” is my personal story, but it’s also universal. I’ve been performing the show throughout the U.S. and abroad and, after every show, audience members wait around to tell me how much of my story is theirs.

Do you prefer acting or writing?

I like them for different reasons. I’m more of a solitary type and as a writer—that’s a good thing.  I like the fact that I can create what I want, when I want and for as long as I want. It’s empowering. I don’t need permission to write. Writing is a very disciplined field and that at times can be the rub. As one of my college professors used to say, writing is rewriting what you’ve rewritten. It’s a process. But I’ve created a space in my apartment that is set up around writing—my kitchen table is my office. Writing is becoming more of what I do, especially these past couple of years when we have all had to isolate due to the pandemic. It’s very rewarding to have something on paper—something that came out of your head by sheer will. The two solo shows I’ve written are different in many ways, but they are also similar.  Both are about a girl’s and a woman’s empowerment.

Saying all that, my love for acting came first. In Guyana, my grandmother was over protective and strict. I became the observant kid with a lot of bottled-up energy. I’d be sitting at the window watching kids play, noticing strangers as they passed by. Their faces and routine became familiar to me. I’d make up their names, imagine where they were heading off to, where they lived, and what their homes were like.  I created a world for them, unbeknownst to them. I think that’s why I gravitated to acting. It allows me to become different characters—the spunky person, the loud mouth, the shy one, the over protective type—and once I’m done playing the part, I can be my regular self again.Acting allows me to empathize, be in someone else’s shoes, speak differently, and walk differently. It allows me to play, be free, and also to be more forgiving.

Do you have any other plays you are working on or ideas you would like to put on paper?

Yes, I do have some ideas that I want to start working on. I don’t like talking about upcoming projects until I’ve gotten started. But yes, I want to keep performing and writing. A major theme in the stories—one I want to continue writing about—is women’s empowerment.

“Women Making HerStory’ at Ethics and the Theater by New York Society for Ethical Culture will be live-streamed on March 25th at 7 pm. To watch this presentation, go to this link. You can find out more about Ingrid Griffith and her work by clicking here and here. If you would like to have her host a performance of one of her plays, you can email Ms. Griffith here.