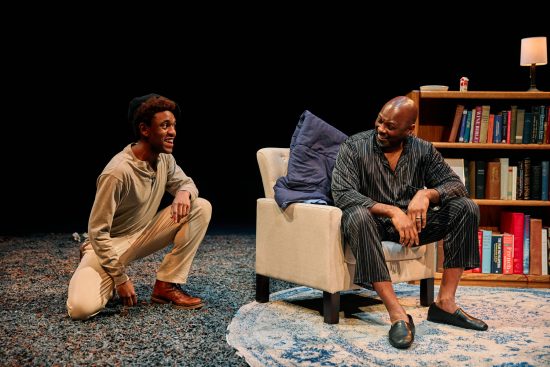 Perisphere Theater is currently presenting Tanya Barfield’s “Blue Door,” a play with original songs, about a highly educated and successful Black man who descended from victims of slavery, Jim Crow, and lynching. In one sleepless night, visits from the man’s deceased brother, grandfather, and great grandfather force him to relive his family’s history from 1850 to 1995 and to come to terms with his identity and the effect of the past on the present.

The two actors in this production kindly took time out of their busy schedules to talk MD Theatre Guide about themselves and the play.

DeJeanette Horne (he/him) (Lewis), a native Washingtonian, is excited to debut with Perisphere Theater in this production of “Blue Door” by Tanya Barfield. Storytelling offers a unique and intimate opportunity for us to share another’s perspective. Thank you for this opportunity to tell a beautiful story.  Other credits include appearing as Mr. M. in “My Children! My Africa!” with the Washington Stage Guild; Jim Bono in Fences with the Little Theatre of Alexandria; Simonides, Leonine, Lychorida, Lord of Tyre, Lord Mytilene, and Philomen in “The Adventures of Pericles” with the Chesapeake Shakespeare Company; and many others.

Jaucqir LaFond (they/he) (Simon/Rex/Lewis) is a graduating senior acting major at Howard University from Atlanta, GA. They were previously seen in the virtual production of “Silence Is Violence: The Future of the Field” (Young Playwrights’ Theater) as co-writer and co-star. Besides acting, Jaucqir enjoys singing, voguing, and writing theatre, poetry, and music. Jaucqir is thrilled to make their return to live theatre with Perisphere and hopes the audience has as enriching a journey with “Blue Door” as they did. You can find more of them on Instagram @jaucqir.

Tell us more about yourself and what drew you to becoming an actor.
I have always enjoyed storytelling. My father created stories for me. As a child I participated in a school play and numerous choirs. Some of the best vocal performances are those that have an element of storytelling, express emotion, and take the listener along for that journey. As a parent, I read and created stories for my children. For me, acting is a natural progression of my love for storytelling. It is a privilege and honor to have an opportunity to work with so many talented artists in our theatre community.

Talk about your experience as an actor in the DMV area.
It has been amazing! I have had the great fortune to work with some very talented, dedicated, caring, supportive, and encouraging people. I have developed friendships and met my wife. I have worked in both community and professional venues. Through every experience, I have learned something that has enabled me to improve my acting craft. I am extremely thankful for the DMV theatre community and excited for what may come.

Tell us what is special to you about this production.
This production touches on so many personally identifiable points. Things that I think most African American/Black, i.e., people of the African diaspora, living in America are aware of but do not fixate or focus on. We accept them, to some extent, as the way things are. For example, intentionally altering your behavior due to concerns about your “blackness,” being perceived as threatening. Ms. Tanya Barfield’s work is wonderful in the way it gives voice to so many points about the black experience, the impact of a long history of oppression, and how “success,” does not easily assuage those lasting effects.

There is a lot of difficult history in this play. How has it affected you?
The “difficult history” is potentially my history. I cannot say that it is the same. I can say that my family, like many others, is from the south. I was also raised on stories of family hardship, some of which were rooted in racial oppression. There were also triumphant moments. So, I identify with aspects of Lewis’ experience. I feel connected to him. This play reminds me that family connection is important to me regardless of where I find myself in life.

Is there a role that you haven’t yet tackled that you would like to do?
Absolutely! There are some roles, e.g., Othello, Joker (from “Batman”), Lion (from “The Wiz”), Lincoln (from “Topdog/Underdog”), Willy Wonka, and many more. Through it all, I love a great story.

Tell us more about yourself and what drew you to becoming an actor.
Hi! My name’s Jaucqir LaFond (pronounced Jah-keer), and I play Simon, Rex, and Jesse in “Blue Door!” I was born in Lansing, Michigan, but I moved to Atlanta when I was six years old. I used to say I discovered theatre in the sixth grade. However, recent chats with family made me realize that my career as a performer began in preschool. I played Guion Bluford in a space pageant when I was about five, and by the time I was eight or nine, I was hosting school performances. Despite my being a fairly socially reserved child, the stage always allowed me to exist uninhibited. Eventually, I did meet musicals via my middle school’s production of “Annie.” Then I began performing in straight plays in high school and just kept enjoying acting more and more. Was lucky enough to realize early that storytelling is my life’s passion, so I decided to run with it! That’s how I ended up studying acting at Howard. To be an actor is to wield the power of moving people through story, and storytelling is a necessary component of societal and cultural growth. That’s why I love telling stories…and it’s fun.

You are about to graduate and taking on multiple roles in a powerful play. Talk about the challenges of the characters.
Well, I’ll speak technically to the challenge of playing the characters, and it’s that there are so many of them! One of my favorite parts of acting is dedicating hours and hours to live as one character, but this was the first time I had to live as multiple characters while treating each as if he were the only one. The dialects did/do trip me up often; I have to admit. Because I wanted to track lineage through dialect, all three characters’ voices were crafted to be variations of each other, modernizing and shifting with each later generation. The characters are jumping back and forth between each other, and sometimes Rex sounds a little bit like Jesse and Jesse like Simon. Hey, that’s family though! It is also challenging to play so many branch-off characters through Simon, Rex, and Jesse, but those characters are also the most fun. I get to be my silliest in the inner-story storytelling, so I appreciate those fringe characters.

Tell us what is special to you about this production.
There are so many special things about this production! The most special is the combination of “Blue Door” being a Black work and it being my D.C. premiere. When I got to Howard, I was exposed to so much Black theatre internationally, and especially, locally, and the prospect of making Black art excited me so much. Now, I’m doing it! More than it being a “Black work,” this play is a really intimate look at the realities of Black life. There is a fun irony in describing living under a white gaze…to white gazes, but the true heart of this experience is sharing this particular story with Black people. The show discusses this, but there is a comfort in the way Black people find beauty in trauma that makes this experience feel worth sharing. I have never done a show that has felt the most like a shared experience, and it feels amazing!

There is a lot of difficult history in this play. How has it affected you?
I am generally hyperaware of my surroundings, but this show has made me zoom in on how I am perceived in public. Because we examine the ways that Black life is dictated by how White society perceives us…it’s kind of all I can think about sometimes! For example, just yesterday, I was at the call box of my friend’s apartment complex, and a resident, a White woman, was entering the building. I could feel her fumbling for her key, and then I thought of Lewis’s story of a White woman observing his hands at a party. In a way, I decided to test my theory of her discomfort. I asked her if I could just walk in behind her to save myself the call, but she denied (because of building policy of course). Being immediately criminalized or feeling like a threatening presence is not new to me, but there is actually an understanding I have gained into the White perspective. Of course the woman yesterday might not have been uncomfortable and was really just a stickler for rules, but I have no choice but to think the former. “Blue Door” also allows me to experience moments like that with a sense of cheekiness thankfully.

You have so much ahead of you. What are you looking forward to and are there any roles you would like to do?
I look forward to more storytelling! I’m gonna act, write, direct, teach, do anything and everything I can to share my and other peoples’ art, and I can’t wait. I am currently working on producing my senior thesis “hermit,” a one-person play/musical/song cycle (we’re still workshopping), which will premiere sometime in mid-April. As far as dream roles, I have a long list of musical ones, Emcee and The Leading Player being pretty high up, but one day, I’d like to think I’d make a fine Hamlet.

Mission: Perisphere Theater produces plays that examine personal and collective history and the notion of history itself.

Vision: A theater experience that gives audiences a greater appreciation of history and of those who are often left out of its retelling.