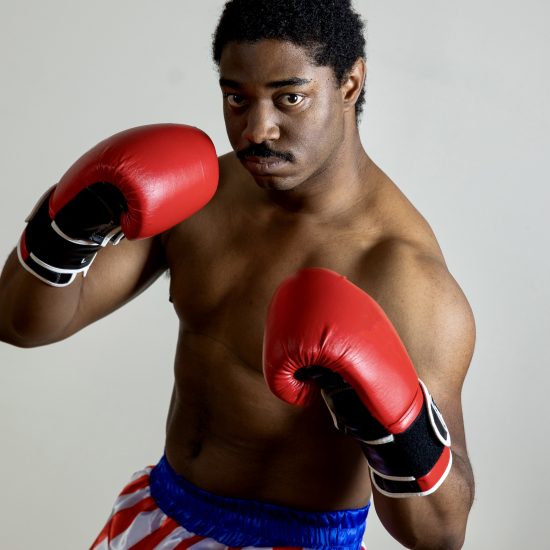 Gerald Jordan is a Maryland native who attended both Hofstra University and the University of Maryland, Baltimore County. He has been an integral part of Columbia Center of Theatrical Arts (CCTA) since 2013. Originally, he came to CCTA as an instructor and now works as the Deputy Director of Operations and Programming. His hard work has paid off in the Baltimore Outreach Program, where he also performs as the lead in the Baltimore Residency Program as Jackie Robinson in “Most Valuable Player.” As CCTA founder Toby Orenstein said of her protégé, “Gerald knows how much of a difference the arts can make in someone’s life. He works diligently to provide the best experience for every student within CCTA’s programs.”

Next up for this talented triple threat is playing the demanding role of Rocky Balboa’s boxing opponent, Apollo Creed, in “Rocky” the musical at Toby’s Dinner Theatre, starting March 26, 2022. This powerful musical, based on the Academy Award-winning Best Picture, tells the story of Rocky Balboa gaining the confidence he needs to take on heavyweight champion Apollo Creed. It is not simply the story of a small-time boxer’s rise to fame, but one of the best love stories ever told. Finding something and someone worth fighting for, he shows Adrian that she is a strong, confident and beautiful woman. The musical features the famous “Rocky” theme, “Gotta Fly Now,” and Survivor’s, “Eye of the Tiger.” (It is interesting to note all the Maryland, Toby’s, and CCTA connections to this musical. Maryland native and Broadway star, Andy Karl, originated the title role on Broadway in 2014 and was Tony-nominated for his performance. Margot Seibert, who grew up in Howard County, made her Broadway debut and originated the role of Adrian. She was also a Young Columbian as a student at CCTA and both she and Andy Karl performed at Toby’s Dinner Theater.)

We caught up with Gerald Jordan after a Monday evening rehearsal at Toby’s Dinner Theater where dozens of folks were gathered outside. I think some were hoping to see the stars of the show close-up. Although I haven’t reviewed Jordan directly, I mentioned his exceptional performance in “Newsies,” performed in the “Dancing for Divas” benefit a few years ago. He has a smile that lights up the stage, and his presence is strong and powerful, much like his Apollo character.

What’s it been like to be playing Apollo Creed in “Rocky?” How did you train for it?
It’s always an honor to play any role. Apollo is a really strong character emotionally and physically which makes it a challenge to tackle. There is a lot of depth and physicality that comes with this role. It’s been a unique experience training for this role, including boxing on top of that. We started boxing lessons in November at Title Boxing in Columbia, near the Mall. It has been quite rigorous and very physical. We are punching in real life, mere inches of each other’s faces. The boxing is very tight, precise, and it takes a lot of trust in your scene partner. It looks very real. Can’t wait to see you there beginning March 26.

Is this your first role at Toby’s? Do you see yourself in Dinner Theatre in the future?
This is my first lead role at Toby’s. Yes, I would love to continue to do dinner theatre. I hope to be able to continue doing so as the time and opportunity allow.

What’s special about working with the students at CCTA?
Working with students is an honor especially as you observe their passion and dedication, not only to each other but to the arts. Anytime you get the opportunity to work with students, there is growth not only as a performer, but as a person which is amazing to watch. Children always end up teaching you something. It’s always a learning experience for not only you but for them as well. We have the best and the most talented students at CCTA.

What are your ideas for Young Columbians?
We are looking to increase the opportunities for the Young Columbians students this next year. We want them to become well-rounded performers, not only focusing on their vocal performance, but helping to enhance their character development, acting skills, and dancing abilities. The Young Columbians is CCTA’s elite group and we want to bring them elite opportunities. We hope to provide them with the experience and opportunities that could not be replicated elsewhere.

Are you going to be involved with “Sister Act” musical for the CCTA kids?
Yes, I will be co-directing with Brynn Williams. Brynn is a CCTA alum and six-time Broadway performer.  We are both incredibly excited. It is a remarkable show and very complex. We know the students will have a lot of fun with it. “Sister Act” is the performance being done in our Senior Intensive Camp (click here) which is audition-based camp for ages 13- 17. It will be held at Howard Community College in the Smith Theatre. We also have a Junior Intensive Camp for ages 11-14 which is non-audition based. They will be doing Stephen Sondheim’s brilliant “Into The Woods, Jr.” For more information, go here. Our musical theatre youth camps for ages 6 – 12 will be performing “Aladdin, Jr.” and “James and the Giant Peach, Jr.” For directions and/questions on all CCTA program, call 410-72-0800 or email admin@cctarts.org.

What is your favorite role?
Every role I play tends to be my favorite at the time. Every role is a different experience that molds you into the performer you are. All the experiences, whether they be a lead role or ensemble, help improve who you are. I always appreciate each role I have and what I learn from them.

You can check out Gerald Jordan’s interview on Razzle Dazzle Radio from December 2021 here.