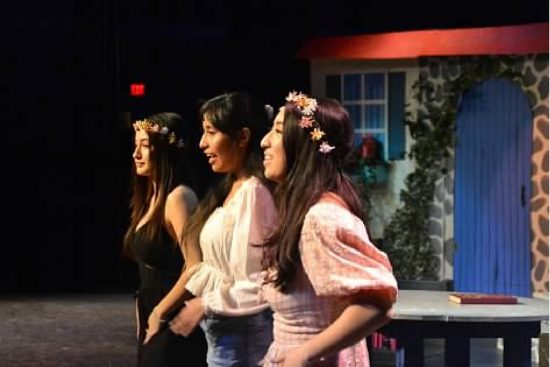 Dazzling costumes, heartfelt characters, stunning choreography, and the timeless songs of pop sensation, ABBA all came together on the Clarksburg High School stage for their production of “Mamma Mia.”

Originally premiering on the West End in 1999, the jukebox musical, “Mamma Mia,” featuring the catchy and unforgettable music of the Swedish pop group ABBA, became an instant classic in the world of theatre. Producing and performing the show was no easy task, but the Clarksburg cast and crew completed the daunting task with ease.

The production was filled with jaw-dropping performances, especially senior Jeanne Lubika, who played Donna. Lubika performed with professional quality, gracing the stage with a hypnotizing voice, profound acting abilities, and incredible dancing. The heartbreaking and climactic ballad, The Winner Takes it All is often regarded for its intense emotional state, and difficulty, but Lubika rose above and beyond, leaving the audience cheering and hollering. Lubika left the audience amazed with her astonishing performance. Other standout performances came from Ishika Naik, playing Rosie, and Brandon Miller as Harry. Naik convincingly portrayed an eccentric middle-aged woman through her physicality and wonderful comedic timing. Naik had the entire audience laughing, especially during the act two song, “Take a Chance On Me,” in which she is desperately and hilariously pursuing a man. Miller portrayed Harry with a gentle and kind demeanor, showing the audience the more vulnerable and emotional side of his character.

The show would be nothing without its incredible ensemble. The ensemble had no easy task of performing backup vocals to almost every song and performing spectacular choreography simultaneously. The ensemble was able to bring vivacious and contagious energy for every number and left the audience wanting more. One member of the ensemble, Sierra Flowers, was notably always dancing with flawless elegance and finesse.

The set for the production featured traditional Greek cobblestone buildings, a set of stairs, and an incredibly creative rotating platform that was used to reveal Sophie’s bedroom in act two. The set team, Rachel Mayo, Lillian Dejesus, Esther Peterson, and Maddie McClure worked tirelessly on the set, and their efforts did not go unnoticed. The clever and visually appealing set helped the audience become truly immersed in the world of the show.

Mamma Mia at Clarksburg High School was filled with fun, laughter, amazement, and heart. The cast and crew truly made every member of the audience feel like the dancing queen.

The performance reviewed was presented on Saturday, March 26, 2022.