Concert Review: ‘America’s Requiem: A Knee on The Neck’ at the Music Center at Strathmore 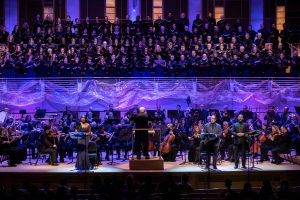 ‘America’s Requiem: A Knee on The Neck” is an intense and moving tribute to George Floyd. It honors the anger and sorrow surrounding his loss and the senseless loss of so many black men, while providing hope and a respite for those who continue the struggle for racial justice in America.

Rich with imagery and infused with African American Spirituals, the piece is written for symphony orchestra and a massive chorus of more than 100 singers­­—powerfully reminiscent of the enormous crowds that gathered in cities nationwide to demand justice in the wake of Floyd’s violent death. Recurring African drumming is a haunting reminder of centuries of racist oppression, silenced voices, and justice denied in America.

Composer Adolphus Hailstork’s score conjured the chaos and confusion of brutality on the streets of Minneapolis, but also moments of ethereal, otherworldly peace. In the midst of such affecting music, librettist Herbert Martin’s text asks the audience to contemplate the desperation in a mother’s words, “laws that govern white men and their attitudes; those laws and attitudes will not consider you in any way; they will take no notice of your heart…,” but later those same mothers are heard again in hope, with the proclamation, “Our mothers raised us in the shadow of love. They infected us with the stamina of strength. They gave us the words of determination.”

Following the audience’s powerful immersion into the contemporary world, the program’s second half featured a return to Mozart’s era. Seemingly a period quite different from our own, Mozart’s Requiem in D Minor, K. 626 reminds us that humanity’s struggles remain largely unchanged. Individually and as a society, we continue to wrestle with life, death, fear, longing, and the need for redemption. Conducted by Gajewski, singers Bridges, Shankle, and Overton returned to the stage with the addition of Janai Brugger whose glorious soprano was a highlight of the evening.