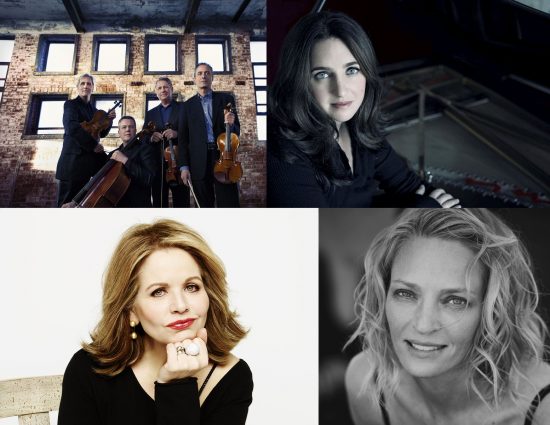 Some of the performing arts world’s brightest stars graced the stage of the Kennedy Center’s Terrace Theater this past Monday evening with a program featuring American composers Samuel Barber, Philip Glass, and Andre Previn, sponsored by the Fortas Chamber Music concert series.

The Emerson String Quartet (Philip Setzer and Eugene Drucker, violins, Lawrence Dutton, viola, and Paul Watkins, cello) opened the evening with a sensitive rendering of George Walker’s “Lyric from his first string quartet, before yielding the stage to pianist Simone Dinnerstein, who performed Glass’s mesmerizing Mad Rush with unmatched elegance and a driving intensity. The first half of the program concluded with Barber’s String Quartet in B minor, Op. 11, a piece that is, for most audiences, inextricably linked to the Vietnam War, having been prominently featured in Oliver Stone’s “Platoon,” winner of the Oscar for Best Picture in 1987.

The Quartet and Dinnerstein returned to the stage accompanied by Academy Award-nominated actress Uma Thurman, and international opera star, Renée Fleming to perform “Penelope,” Andre Previn’s final work. The piece was co-commissioned by the Kennedy Center, the Boston Symphony Orchestra, the Ravinia Festival, and the Aspen Music Festival and School in celebration of the composer’s 90th birthday, a milestone Previn did not live to see, nor was he able to finish the work before his death in February 2019. Previn’s editor of 22 years, composer David Fetherolf, completed “Penelope,” and it premiered at the Tanglewood Music Festival in July 2019.

Inspired by Homer’s “Odyssey,” with text by British playwright Tom Stoppard, the monodrama features a singing Penelope (Fleming), and a speaking Penelope (Thurman) with piano and string quartet. As the tale unfolds, Penelope recalls her creative attempts to fend off potential suitors while she awaited the return of her husband Odysseus. Following a 20-year absence, he arrives home disguised as a beggar, learns of her loyalty and faithfulness during the many years he was away, and the couple is happily reunited.

The evening ended with a rousing, standing ovation. The intoxicating blend of string and pianistic virtuosity with Thurman’s crisp, witty, and commanding narrative, and the incomparable beauty of Fleming’s voice made for a triumphant reading of Previn’s “Penelope” and an unforgettable evening.

“Renée Fleming & Emerson String Quartet with Pianist Simone Dinnerstein and Special Guest Uma Thurman” was performed on Monday, February 28, 2022, at 7:30 pm in the Terrace Theatre at the Kennedy Center for the Performing Arts, 2700 F Street NW, Washington, DC 20566. For information about upcoming performances at the Kennedy Center, click here.  To learn more about the Fortas Chamber Music Series, click here.

Note that Proof of full vaccination against COVID-19 and a valid photo ID are required to attend all indoor performances and events at the Kennedy Center.