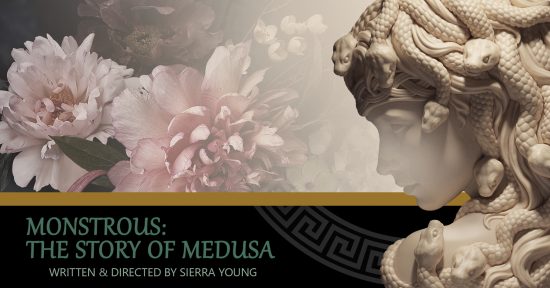 COLUMBIA, MD – The Howard Community College (HCC) theatre program presents three productions at the Horowitz Center this spring through June 2022. The spring productions kick-off with a mythical, original piece, “Monstrous: The Story of Medusa,” followed by a story about wizardry, “Puffs: Or Seven Increasingly Eventful Years at a Certain School of Magic and Magic,” and ending with the classical Shakespearean tragedy, “Romeo and Juliet.”

Monstrous: The Story of Medusa
Written and directed by Sierra Young
March 31 – April 3, 2022

The HCC theatre program brings Greek mythology to life in the premiere of “Monstrous: The Story of Medusa.” In this fresh retelling of the classic myth, the birth of the monster Medusa has been re-framed for our time. Written and directed by HCC alumna Sierra Young, the production explores our shared humanity and accountability.

Due to the discussion and depiction of sexual assault in the show, the theatre program is partnering with HopeWorks of Howard County, who support and advocate for people affected by sexual violence. There will be resource information and/or staff from HopeWorks after each performance.

Performances of “Monstrous: The Story of Medusa” take place in The Rouse Company Foundation Studio Theatre at HCC’s Horowitz Center on March 31, April 1, and April 2, at 7:30 p.m., with a 2:30 p.m. performance on Sunday, April 3. A post-show reception will follow the performance on Thursday, March 31. Tickets are $15 for general admission, and $10 for students, seniors, and military.

This production is recommended for ages 14 and up. Children under the age of 4 are not permitted. Content warning: This production contains violence, discussion and depiction of sexual assault, and mature language.

Puffs: Or Seven Increasingly Eventful Years at a Certain School of Magic and Magic
By Matt Cox
Directed by Jenny Male
May 12 – May 15

For seven years, a certain boy wizard went to a certain Wizard School and conquered evil. This, however, is not his story. This is the story of the Puffs… who just happened to be there, too. Directed by HCC coordinator of theatre, Jenny Male, “Puffs” is a fantastical ensemble show filled with magic, adventure and joy for anyone who has never been destined to save the world.

This production is recommended for ages 12 and up. Children under the age of 4 are not permitted. Contains mature language.

Romeo and Juliet
By William Shakespeare
Directed by Bill Gillett
June 23, 24, and 25

This production of the classic tragedy will bring the world’s most famous star-crossed lovers to life for three nights under the stars. Directed by Chair of Theater and Dance Bill Gillett, audiences are encouraged to bring their own snacks while watching Shakespeare’s tragedy outdoors on HCC’s Dreier Stage.

This production is recommended for ages 12 and up. Patrons are welcome to bring their own snacks and beverages; no alcohol permitted on campus.

For more information about the theatre productions, visit www.howardcc.edu/studenttheatre.

About The HCC Theatre Program
The HCC Theatre Department is devoted to offering relevant and educational on and off stage experiences for students and community members to augment classroom learning and provide valuable performing opportunities. It is in this vein that we offer additional works throughout the year, which include fall and spring plays and musicals, touring children’s theatre, showcases, and outdoor Shakespeare performances. Led by a professional theatre faculty, students are well-prepared for a future in theatre.

ABOUT HCC
Since 1970, Howard Community College (HCC) has been a preferred college choice for students and families in Howard County, Maryland. A public community college, HCC offers associate degree and certificate programs, as well as workforce development training and continuing education classes, to more than 26,000 credit and noncredit students each year. HCC received the 2019 Malcolm Baldrige National Quality Award, the nation’s only presidential-level honor for performance excellence in organizations.