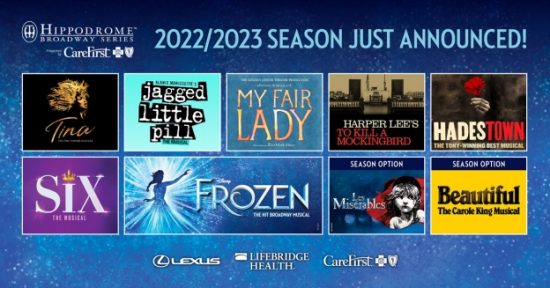 BALTIMORE, Md. (Tuesday, March 29, 2022) – Ron Legler, president of the France-Merrick Performing Arts Center, home of the Hippodrome Theatre, today announced the lineup for the new 2022/2023 CareFirst® BlueCross BlueShield Hippodrome Broadway Series. Among the season’s impressive lineup are market premieres of Harper Lee’s TO KILL A MOCKINGBIRD, the most successful American play in Broadway history, HADESTOWN,Tony Award®-winner for Best Musical and Grammy® Award-winner for Best Musical Theatre Album and SIX, the new original musical and global sensation that everyone is losing their head over.

“We are thrilled to offer our dedicated patrons and subscribers another fantastic year of musical theatre jam-packed with exciting new Broadway productions,” says Legler. “It has been a joy to welcome audiences back to our home this past year. We are grateful to our loyal supporters for their flexibility and cooperation as we’ve continually navigated life’s recent changes and look forward to stepping into a new era of live performance together.”

The upcoming season also presents the Baltimore premieres of TINA – THE TINA TURNER MUSICAL, which chronicles the journey of a woman who broke barriers and became the Queen of Rock n’ Roll, JAGGED LITTLE PILL, the fearless new musical based on Alanis Morissette’s world-changing music and DISNEY’S FROZEN, an unforgettable theatrical experience filled with sensational special effects and stunning sets and costumes. The new season will feature the Lincoln Center Production of Lerner & Loewe’s award-winning, critically-acclaimed MY FAIR LADY.

Returning to the Hippodrome as Season Options are LES MISÉRABLES, an epic and uplifting story that has become one of the most celebrated musicals in theatrical history based in 19th century France and BEAUTIFUL – THE CAROLE KING MUSICAL, which shares the inspiring true-life story of Carole King.

An uplifting comeback story like no other, TINA – The Tina Turner Musical is the inspiring journey of a woman who broke barriers and became the Queen of Rock n’ Roll. One of the world’s best-selling artists of all time, Tina Turner has won 12 Grammy Awards and her live shows have been seen by millions, with more concert tickets sold than any other solo performer in music history. Featuring her much loved songs, TINA – The Tina Turner Musical is written by Pulitzer Prize-winning playwright Katori Hall and directed by the internationally acclaimed Phyllida Lloyd.

“I’ve rarely heard an audience with this mighty a roar.”
– The New York Times

Joy, love, heartache, strength, wisdom, catharsis, LIFE—everything we’ve been waiting to see in a Broadway show— is here in the exhilarating, fearless new musical based on Alanis Morissette’s world-changing music.

Directed by Tony Award winner Diane Paulus (Waitress, Pippin, upcoming 1776) with a Tony-winning book by Diablo Cody (Juno) and Grammy-winning score, this electrifying production about a perfectly imperfect American family “vaults the audience to its collective feet” (The Guardian). “Redemptive, rousing and real, JAGGED LITTLE PILL stands alongside the original musicals that have sustained the best hopes of Broadway.” (The New York Times)

You live, you learn, you remember what it’s like to feel truly human… at JAGGED LITTLE PILL.

From Lincoln Center Theater that brought you The King & I and South Pacific, comes “a sumptuous new production of the most perfect musical of all time” (Entertainment Weekly), Lerner & Loewe’s MY FAIR LADY.  Director Bartlett Sher’s glowing production is “thrilling, glorious and better than it ever was” (New York Times).  “Every so often a revival comes along that reminds you how indispensable great theater can be” (NY1).

Boasting such classic songs as “I Could Have Danced All Night,” “The Rain in Spain,” “Wouldn’t It Be Loverly” and “On the Street Where You Live,” MY FAIR LADY tells the story of Eliza Doolittle, a young Cockney flower seller, and Henry Higgins, a linguistics professor who is determined to transform her into his idea of a “proper lady.”  But who is really being transformed?

“Thrilling! Glorious and better than it ever was! A marvelous and transformative revival.”
– The New York Times

This brilliant staging has taken the world by storm and has been hailed as “Les Mis for the 21st Century” (Huffington Post), “a reborn dream of a production” (Daily Telegraph) and “one of the greatest musicals ever created” (Chicago Tribune). Set against the backdrop of 19th century France, LES MISÉRABLES tells an enthralling story of broken dreams and unrequited love, passion, sacrifice and redemption – a timeless testament to the survival of the human spirit. This epic and uplifting story has become one of the most celebrated musicals in theatrical history.

The magnificent score of LES MISÉRABLES includes the songs “I Dreamed a Dream,” “On My Own,” “Bring Him Home,” “One Day More,” “Master of the House” and many more.  Seen by over 130 million people worldwide in 53 countries and 22 languages, Les Misérables is undisputedly one of the world’s most popular musicals.

“LES MISÉRABLES is undisputedly one of the greatest musicals ever created.”
– The Chicago Tribune

BEAUTIFUL – THE CAROLE KING MUSICAL tells the inspiring true story of King’s remarkable rise to stardom, from being part of a hit songwriting team with her husband Gerry Goffin, to her relationship with fellow writers and best friends Cynthia Weil and Barry Mann, to becoming one of the most successful solo acts in popular music history. Along the way, she made more than beautiful music, she wrote the soundtrack to a generation.

Featuring a stunning array of beloved songs written by Gerry Goffin/Carole King and Barry Mann/Cynthia Weil, including “I Feel The Earth Move,” “One Fine Day,” “(You Make Me Feel Like) A Natural Woman,” “You’ve Got A Friend” and the title song, BEAUTIFUL has a book by Tony® Award-nominee and Academy® Award-nominated writer Douglas McGrath, direction by Marc Bruni, choreography by Josh Prince, and took home two 2014 Tony® Awards and a 2015 Grammy® Award.

“‘BEAUTIFUL is a marvel! It brings you back to a time when music brought people together…”
– HuffPost

All rise for Academy Award® winner Aaron Sorkin’s adaptation of Harper Lee’s Pulitzer Prize-winning masterwork. The New York Times Critic’s Pick TO KILL A MOCKINGBIRD is “the most successful American play in Broadway history.” (60 Minutes). Rolling Stone gives it 5 stars, calling it “an emotionally shattering landmark production of an American classic,” and New York Magazine calls it “a real phenomenon. Majestic and incandescent, it’s filled with breath and nuance and soul.” With direction by Tony Award® winner Bartlett Sher, TO KILL A MOCKINGBIRD — “the greatest novel of all time” (Chicago Tribune) — has quickly become “one of the greatest plays in history” (NPR). Emmy Award®-winning actor Richard Thomas will play the role of Atticus Finch in the National Tour.

Welcome to HADESTOWN, where a song can change your fate. Winner of eight 2019 Tony Awards® including Best Musical and the 2020 Grammy Award for Best Musical Theater Album, this acclaimed new show from celebrated singer-songwriter Anaïs Mitchell and innovative director Rachel Chavkin (Natasha, Pierre & The Great Comet of 1812) is a love story for today… and always.

HADESTOWN intertwines two mythic tales — that of young dreamers Orpheus and Eurydice, and that of King Hades and his wife Persephone — as it invites you on a hell-raising journey to the underworld and back. Mitchell’s beguiling melodies and Chavkin’s poetic imagination pit industry against nature, doubt against faith, and fear against love. Performed by a vibrant ensemble of actors, dancers and singers, HADESTOWN is a haunting and hopeful theatrical experience that grabs you and never lets go.

This production also marks the first time in over a decade that a woman has been the solo author of a musical: writing the music, lyrics, and book, and is the fourth time in Broadway history a woman has accomplished this creative feat.

“It roars off the stage with a ferocity that has not been matched on Broadway in a long while.”
— Chris Jones, Chicago Tribune

From Tudor Queens to Pop Princesses, the SIX wives of Henry VIII take the mic to remix five hundred years of historical heartbreak into an exuberant celebration of 21st century girl power! This new original musical is the global sensation that everyone is losing their head over. The New York Times says SIX “TOTALLY RULES!” (Critic’s Pick) and The Washington Post hails SIX as “Exactly the kind of energizing, inspirational illumination this town aches for! The Broadway season got supercharged!” Written by Toby Marlow & Lucy Moss.

“A riotous explosion of wit that speaks strongly and vibrantly to today. ALL HAIL!”
– VOGUE

From the producer of The Lion King and Aladdin, Frozen, the Tony®-nominated Best Musical, is now on tour across North America and the critics rave, “It’s simply magical!” (LA Daily News). Heralded by The New Yorker as “thrilling” and “genuinely moving,” FROZEN features the songs you know and love from the original Oscar®-winning film, plus an expanded score with a dozen new numbers by the film’s songwriters, Oscar winner Kristen Anderson-Lopezand EGOT winner Robert Lopez. Oscar winner Jennifer Lee (book), Tony and Olivier Award winner Michael Grandage (director), and Tony winner Rob Ashford (choreographer) round out the creative team that has won a cumulative 16 Tony Awards. An unforgettable theatrical experience filled with sensational special effects, stunning sets and costumes, and powerhouse performances, FROZEN is everything you want in a musical: It’s moving. It’s spectacular. And above all, it’s pure Broadway joy.

Individual ticket on-sale dates will be announced throughout the year. Groups of 10 or more should contact Groups@BaltimoreHippodrome.com.

Current subscribers will receive announcements via email. The Hippodrome Broadway Series offers an array of subscriber benefits including: priority purchase opportunities and a flexible six-part payment plan, dedicated patron services, exchange privileges and replacement on lost or stolen tickets. In addition, subscribers can take advantage of Hippodrome Live special offers plus membership privileges to Broadway Across America, a national network of more than 48 North American cities where Broadway is presented. *Benefits may not apply to all shows.

Broadway Across America (BAA) is part of the John Gore Organization family of companies, which includes Broadway.com, The Broadway Channel, BroadwayBox.com and Group Sales Box Office.  Led by 15-time Tony-winning theater producer John Gore (Owner & CEO), BAA is the foremost presenter of first-class touring productions in North America, operating in 48 markets with over 400,000 subscribers. Presentations include Disney’s The Lion King, Wicked, The Book of Mormon, The Phantom of the Opera and Hamilton. Current and past productions include Ain’t Too Proud, Beautiful, Cats, Chicago, Dear Evan Hansen, Mean Girls, Moulin Rouge! and To Kill A Mockingbird.

The John Gore Organization is the leading presenter, distributor, and marketer of Broadway theatre worldwide. Under the leadership of 15-time Tony-winning theatre producer and owner John Gore, its family of companies includes Broadway Across America, Broadway.com, The Broadway Channel, BroadwayBox.com, and Group Sales Box Office. The company presents shows in 48 cities across North America as well as on Broadway, Off-Broadway, London’s West End, Japan, and China. It has won Tony Awards in every producing category as well as numerous other Drama League, Drama Desk and Olivier Awards. The John Gore Organization is committed to supporting theater access and education programs that introduce Broadway to the next generation of audiences and theater professionals.

The Hippodrome Broadway Series is presented in partnership with THE HIPPODROME FOUNDATION. The Hippodrome Foundation, Inc. is a 501(c)3, non-profit organization established in Baltimore, Maryland in 1976. Formerly known as the Baltimore Center for the Performing Arts (BCPA), the foundation was created to present live theater at the Morris A. Mechanic Theater. Over the years, HFI has evolved into its present incarnation as the largest presenter of Broadway in Maryland working in partnership with Broadway Across America to bring in the very best possible shows.