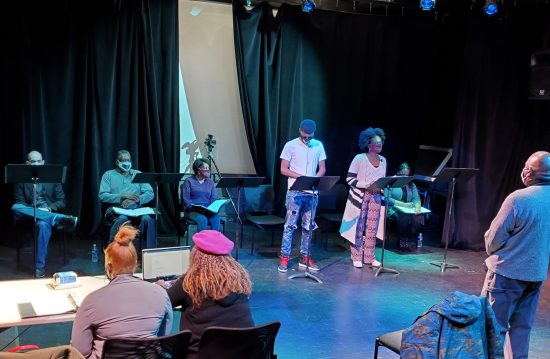 Derrick Hardy, Jr. and Gifty Amponsem rehearse, “A Matter of Faith,” by La’Chris Jordan. Photo by See the Fruits.

The Essential Theatre New Play Reading Series presents The Faith Play Project, two plays in workshop presentations during the Lenten season. “A Matter of Faith,” by La’Chris Jordan and “A Field of Thorns,” by John Becker will rotate in virtual, on-demand presentations, March 24-April 24, 2022, Thursday through Sunday of each week. All presentations will be closed-captioned for the hearing impaired.

Made possible by support from the DC Commission on the Arts and Humanities and funded in part by the National Endowment for the Arts, the plays were developed in the theatre company’s new play development program. “We begin with the objective to create the well-made play and the expectation is that our process would lead us here,” said Founder/Artistic Director, S. Robert Morgan. “These series of presentations will again allow us to work out the kinks that might exist with new drafts of each script prior to scheduled world premieres,” he explained.

For more information, call 202.328-0569. Patrons must register to stream FREE and on-demand at theessentialtheatre.org.

“A Matter of Faith”
by La’Chris Jordan
Faith Morgan is a Jehovah’s Witness who has just been diagnosed with leukemia and only a blood transfusion can save her. Faith knows if she takes the transfusion, she will be ex-communicated. Faith’s husband, Sam, is determined to keep her alive despite all objections. But will time run out for Faith as those around her debate the issue of whether she should live or die in the name of GOD?

“A Field of Thorns”
by John Becker
The Harts are a White working-class family struggling with a recent loss, a maladapted younger son who longs for brotherly kinship and an iconoclast of a daughter whose dinner time behavior incites family discord. Add to that a mysterious Black man who wanders into their home during an evening storm claiming to be the son of GOD and you have a divine recipe forabsurdity, drama, pithy humor, but most of all healing.

About the Play Development Program
The New Play Reading Series is created to give voice to work of new and established playwrights. It is in substance an incubator that serves to nurture the work of participating writers for a three-year period in a supportive and collaborative environment with other artisans, actors, and directors. Further, it is a forum where audience members are welcomed to engage in an open, frank dialogue with playwrights about issues presented in the material as well as techniques used to present them. The New Play Reading Series was initiated in the spring of 1992.

About the Company
The Essential Theatre is a non-profit, professional theatre dedicated, but not limited to producing  theatre reflective of the African American experience that explores and celebrates America’s rich, diverse cultural landscape. Paramount to the company’s mission is the implementation of programs for youth in Washington, DC’s metropolitan area that promotes interdisciplinary education and positive self-esteem. Founded in 1989, the company hosts a play development program, The Essential Theatre’s New Play Reading Series, the Children’s Program in Public Schools/Young Audiences’, and the Women’s Works Program. The company also maintains relationships with area Social Services programs to provide job training opportunities.