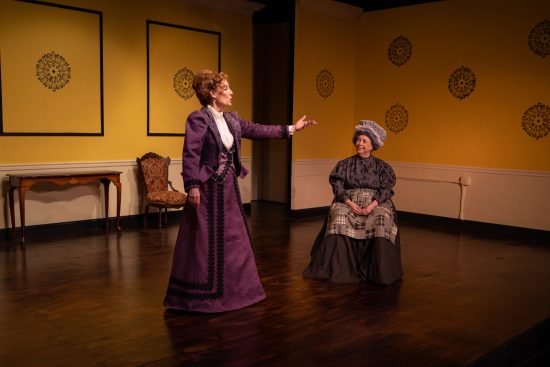 “A Doll’s House, Part 2” at Fells Point Corner Theater brings us into the rather sparse entry room of a late 19th century Norwegian banker. The walls, bare accept for a repeated radial design that gives a sense of the time, creates an expansive forum for the characters to debate. This is just what the script calls for, and set designer Roy Steinman has delivered. The costumes, courtesy of designer Mary Bova, are the delightful pieces any audience member hopes for from a period play.They effectively cue us in to what to expect from the characters before they even speak.

…fun, thoughtful, and riveting argument about how we should relate to each other.

Which brings us to the actors—all of the “dolls” in this house are incredibly powerful. First we meet Anne Marie (Janise Whelan), the maid, who opens the door to reveal Nora (Holly Pasciullo), who has returned to the home of her ex-husband for the first time in fifteen years. Thus begins a lovely banter, with both actors displaying fantastic comedic chops, that soon transforms into Nora’s jeremiad against marriage. It is in this ever-present debate that pervades the play, surrounding the utility, value, and harm of marriage as an institution, that the actors shine. “Ex”-husband Torvald (Tom Piccin) and daughter Emmy (Kelly Hutchinson) join in this discourse, invoking the pain that the dissolution of their marriage caused and a person’s own agency in choosing what kind of relationship works for them. Anne Marie, meanwhile, has a lot to say about the options she didn’t have compared to Nora, and about the responsibility she felt for Nora’s children that our protagonist didn’t seem to share.

All of the characters are articulate and forceful in their stances without descending into caricature. In regards to those with whom we are meant to disagree more (given how nuptial mores have changed over the last century), there are no villains. This made it possible to remain engaged with the debate throughout the entire play. I was constantly at the edge of my seat, excited to hear what new point or rebuttal was next to be proposed. The script is very head-forward, and every single actor tackled this with great aplomb.

While the actors successfully embodied the intelligence of the script, they weren’t particularly present in the emotional reality of the script. Upon meeting again after fifteen years of estrangement, none of the actors seemed to embody the shock or ambivalence that one would expect from such a reunion, especially given the circumstances of Nora’s departure. Rather, it felt like running into an acquaintance after some recent awkwardness. This difficulty was likely exacerbated by the fact the performers tended to focus their screes and monologues at the audiences or walls rather than to each other. There is a degree to which the story calls for this—at one point, Nora calls Torvald “emotionally constipated” —but the feelings seemed less repressed than absent.

There were moments, however, when the characters’ internal worlds shined through—Whelan’s anger at what Nora ruined; Pasciullo’s grief and gratitude for what Anne Marie sacrificed; Hutchinson’s indignation at what Nora presumes; Piccin finally snapping when Torvald’s show of self-sacrifice is found unnecessary. These were glittering instances that made the intellectual life of the production that much more compelling.

I applaud director Steve Goldklang for working with these actors to bring everything to life. Keeping such a cerebral play exciting can be a difficult feat, and he has kept it vital with humor and flair. There were also small moments of stage business that, while easy to miss, were delightful gestures that demonstrate Goldklang’s craft. I chuckled when Nora flipped her chair around and sat like an English professor with wisdom to impart. While the play was not always heart forward, the climax of the play—when the actors finally stopped holding back, when all the conflicts and uncertainties fell into place, and the rapid rhythm we’d become accustomed to finally stilled—was deeply moving and very powerful.

“A Doll’s House, Part 2” is a fun, thoughtful, and riveting argument about how we should relate to each other. Go see it and be prepared to wonder, ponder, and leave with your mind expanded.

Running Time: 1 hour and 30 minutes without an intermission.