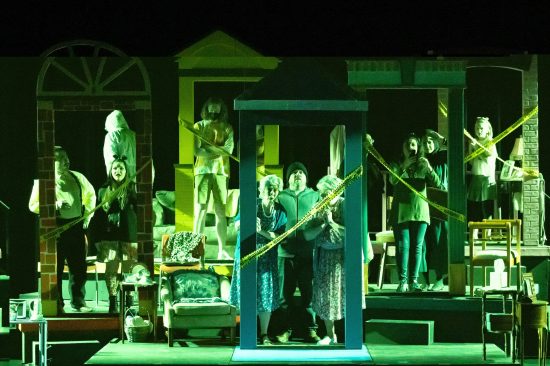 The cast of “A Delightful Quarantine.” Photo courtesy of Heather Regan Photography.

Mark Dunn’s “A Delightful Quarantine” is, at its heart, a totally demented and compressed “Our Town.” This play is a mad-cap romp of what could happen in a quarantine—at least if aliens are involved. As produced and staged by the Reston Community Players, it’s just fun and feel-good all the way through.

fun and feel-good…lively show with some real comedic moments that the cast serves up well. It’s a nice antidote to cold days and depressing news.

We start by meeting Professor Lucy Fuller (a hyper-kinetic Beth Atkins) who is conducting a class on the last of the alien visits to gather soil samples. She takes us through the three days of a quarantine in a neighborhood of a small, Pennsylvania town. People who were on a date are suddenly on a really, really long date. A hapless burglar becomes trapped with two elderly ladies and, for a while, it seems as if shades of “Arsenic & Old Lace” will ensue. Two couple friends end up with each other’s spouses. Two girls become trapped in an elderly neighbor’s house (the neighbor is away). They go through the trunks in the basement which prove to be a time capsule of costumes from the 1920s on. A woman and her daughter meet the woman’s other daughter whom she gave up for adoption. An adult sister and brother reconnect and learn to accept each other.

The play is often very funny but, at other times, the mix of drama and comedy is uneasy. One of the funniest vignettes is the really, really long date. It is totally absurd and centers on a woman who might have 14 cats, or they might be figments of her imagination. The script works best when one simply suspends disbelief and takes this show for the insanity it is.

It has a very large cast—24 characters are on stage, although not always at once. It is a showcase of ensemble acting. Set designers Anna Mintz and Liz Mykietyn created a three-tiered set that, through the use of seven front doors that are criss-crossed with police tape, gives us a glimpse into the changing lives of the seven families on the street. Cleverly, the doors fly up into the eaves, and lighting designers Jeff Auerbach and Kimberly Crago highlight each room’s action in turn.

Director Liz Mykietyn’s primary theme seems to be to not be afraid of change because it can lead to unexpected, and in some cases, freeing delights. She keeps the actors moving on and off crisply. Having the seven living rooms on stage at all times obviates the need for scenic changes, which, with a cast this large and so many stories swirling, would be jarring.

Reston Community Players has produced a fun and lively show with some real comedic moments that the cast serves up well. It’s a nice antidote to cold days and depressing news.

Show Advisory: None. This is family-friendly for kids 10 and up.

“A Delightful Quarantine” runs through March 12, 2022 at Reston Community Players, at CenterStage at Reston Community Center, Hunters Woods Village Center, 2310 Colts Neck Road, Reston, VA 20191. For information and tickets, call 703-476-4500. Press 3 for the 24-hour ticket ordering hotline. Please note that the ticketing hotline does not have a live operator. You can also order tickets online.

Show Health and Safety Protocols: Masks must be worn in the building at all times.