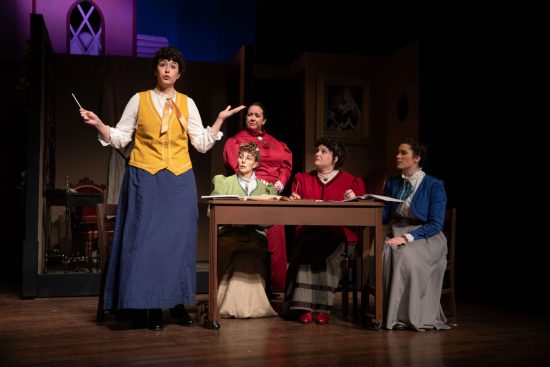 ‘”Blue Stockings” is both a rousing and thoughtful play. Set in the late 1890s as young women were pushing for the right to be allowed a degree while attending one of the women’s colleges at Cambridge (in this case, Girton), the play is an engrossing and painful history of women wanting to be full participants in the world. At times, it’s brutally painful, and rightfully so. It’s also full of the delight of discovery and watching these young women blossom.

‘Blue Stockings’ is a wonderful show—thoughtful, playful, searing. The Little Theatre of Alexandria has hit this one out of the park.

The play starts off with two people directing remarks to a panel who will vote on whether or not women should be allowed to earn degrees—Dr. Maudsley (a firebrand Robert Heinly) and Elizabeth Welsh (a stoic, yet conflicted, Liz LeBoo), who was actually the mistress of Girton College during the time the play is set. Their remarks lay out the parameters for the difficulty in changing society’s expectations, particularly when one group fears they may lose their primary place in the world. This is more than timely, without undue sermonizing.

Our next scene introduces us to the four young women protagonists who make up the current class of scholars, and are representative of different social classes and economic circumstances. Ilyana Rose-Dâvila plays Maeve Sullivan, daughter of a working class family; the other three come from middle-class, professional class and upper-class  circles—Melissa Dunlap as Cecilia Willlbond, Tegan Cohen as Carolyn Addison, and Madeline Byrd as Tess Moffat (with an untamed heart that will teach her a harsh lesson). Their other female instructor is Miss Blake (a fierce Elizabeth Replogle) who succeeds in instilling in them a broader view of the world and the necessity of the humanities/arts and science together. One of the most beautiful moments in the play is when Maeve, who is the most reserved due to class differences, articulates the beauty of poetry and science and the magic they create.

Through the ensuing scenes we meet some of the young men with whom they are allowed to share classes, as long as they sit at the back and not speak—Michael King (Holmes), Ali Cheraghpour (Edwards), James Blacker (Lloyd), and John Paul Odle (Will Bennett). Mostly the boys are larking about as they have the privilege to understand that they will receive degrees and be cosseted and mentored. In one of the other most riveting scenes, Lloyd unleashes his fear, rage, and bitterness on the young women for daring to infringe on this male domain. The sight of male anger is indeed a frightening thing, as is the fact that he feels he has the right to be verbally abusive.

We meet some of the professors and the librarian (all male as women are not given so august a title) and they are not immune to the changes in society. It costs one male assistant professor dearly and one of the women instructors as well.

The suffragist movement also has a role to play and creates a schism between the mistress of Girton and the humanities/arts instructor. The echoes are eerily reminiscent of the divides that remain today in feminist ranks.

The rest of the cast is comprised of Paul Donahoe (he’s a delight in his portrayal of a man with a conscience), Joel Durgavich, Hilary Adams, Khalia Muhammad, Michael Rufo, Will Cooke, Manus Nunan, and Anne Hilleary.

This ensemble cast does a remarkable job of capturing the expectations and mores of the period. The director, Marzanne Claiborne, cannily lets the actors have the full complexity of their characters as well as the underlying fears that paralyze some of them. The characters may be representative of differing outlooks, classes, and even of the scientific pinnacles of the era, but they are fully-realized as individuals. Given the 25 scenes in the play, the strength of the script in finding the truth in each interaction is a marvelous feat.

Costume designer Joan Lawrence has done a splendid job with the period costumes, including the bloomers (there’s a very funny bicycle scene). The set is designed by Charles Dragonette, placing Girton and the men’s colleges on their separate halves of the stage. Lighting design is by Franklin Coleman and sound design is by Alan Wray.

“Blue Stockings” is a wonderful show—thoughtful, playful, searing. The Little Theatre of Alexandria has hit this one out of the park.

Show Health and Safety Protocols: Requires all persons attending performances to provide proof of full COVID vaccination AND to wear a mask inside LTA (including during the performance). This policy applies to all persons regardless of age. Anyone who is not vaccinated, or who is too young for vaccination, must provide (or have provided for them) proof of a negative Covid PCR test taken within 48 hours of attendance. The safety of all who are volunteering, performing, and attending is our utmost priority—there can be no exceptions.