Theatre Review: ‘Catch Me If You Can’ at Arena Stage 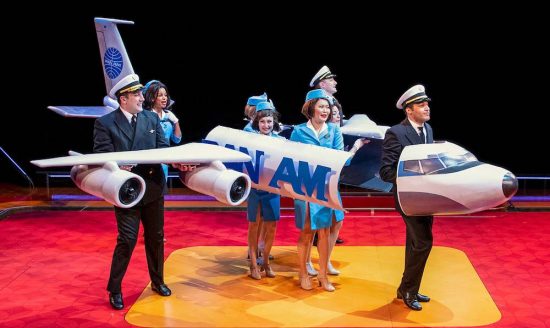 Christian Thompson (Frank Abagnale Jr., right) and the cast of “Catch Me If You Can” at Arena Stage. Photo by Margot Schulman.

Based on the true story of the young con artist, Frank Abagnale Jr. (and the 2002 film), the musical “Catch Me If You Can” opened on Broadway in 2011 and starred Aaron Tveit (currently performing his Tony-winning role in “Moulin Rouge.”) The musical received four Tony Awards, including Best Musical and the Best Actor award for Norbert Leo Butz.

Arena Stage just premiered a new version with a few tweaks to the script and two new songs songs: “Fifty Checks” for Frank Sr. and “Here I Am to Save the Day” for FBI agent, Carl Hanratty. The late Terrence McNally originally wrote the book and was represented by his widower, Tom Kirdahy, on opening night. The lyrics were co-written by Marc Shaiman (who also wrote the music) and Scott Whitman, who was also present at the performance.

The musical when Frank Jr. is cornered in an airport lounge by FBI agent Carl Hanratty. The show moves into a flashback mode, presented as a 60s variety show by introducing the characters as guests with microphones in hand, backed by an ensemble of singer/dancers.

In an attempt to help his father, Frank Sr., who is in big trouble with IRS, and to avoid having to choose between living with him or his French mother, Paula (who had an affair and consequently married his father’s friend) the comic-book loving, 17-year-old Frank Jr. runs away to find his fortune in New York City. With a checkbook from his father in hand and discovering his gift with the con, he manages to pass himself off as a Pan Am co-pilot, a lawyer, and pediatric doctor—and committing bank fraud by bilking people along the way out of two million dollars. He also gains a reputation as a ladies’ man until he lands in a little southern town and falls in love with Brenda, an innocent nurse from New Orleans. Intertwined with his story is his pursuer, FBI agent Hanratty, a no-nonsense workaholic who becomes obsessed with catching his man. They form an unlikely father-son connection when Frank Jr. calls Carl every Christmas from wherever he is.

Both of his Frank Jr.’s parents are very flawed and self-absorbed. His father (Jeff McCarthy) becomes an alcoholic, still dreaming to get back in the game and win back his ex-wife. Paula (Stephanie Pope Lofgren) is like a queen sitting on her settee, with people appearing at her every bidding. There are equally poignant and funny moments when Hanratty interviews each of them. A comical, film noir twist is given to his interview with Paula. Her French accent needs work but she is indeed the femme fatale. The music here is cleverly imbued with the bossa nova sound that was invented in the 60s. The score also uses a mix of jazz, dixieland, blues, R&B, pop, and a little touch of rock and roll. When Hanratty interviews his father, they both reveal the expectations and abuses of their own fathers in a bluesy “Little Boy, Be a Man.”

As Brenda, Frank Jr.’s naive fiancée, Hayley Podschun, gives us more emotional range. The big payoff comes towards the end of the show with Brenda’s heart-felt and soaring “Fly, Fly Away” that brought the house down. This coincides with the believable transition of Carl Hanratty, from a man with no life other than his job, to his growing paternal feelings for Frank Jr. When he is standing in the dark at one corner while watching Brenda sing across the stage from him, the simple gesture of putting his hand on his heart speaks volumes. Nehal Joshi gives Norbert Leo Butz a run for his money.

Christian Thompson as Frank Jr. is handsome, talented, and very engaging, (an alum—as Smokey Robinson—from Broadway’s recently-closed “Ain’t Too Proud”). He has lots of charm in his variety show host-like style but lacks a bit of the darker side required for the character.

Director Molly Smith utilizes every inch of the stage, the stage entrances, and keeps the pace in high-gear. You don’t feel cheated because of the theater-in-the round setting—except you wish there was more of it. There is a lot of breaking the fourth wall with the audience. Though it provides a lot of laughs, it also keep things light and, at times, harder to connect to the more serious moments. Conductor Laura Bergquist becomes part of the action when she interacts with the actors, like the band-leader sidekicks that still exist in late night shows—and the hidden orchestra sounds fantastic.

Visually, this is a jewel box of 1960s sensibilities and the entire production team has nailed it. The set is all rounded rectangles in yellow, orange, and red, with lights in the floor and above like a marquee. There are two sets of curved bench seats and two stair openings (also curved) on opposite sides that go underneath the stage. The different set pieces rise from the center square. The details and props are extraordinarily thoughtful thanks to set designer Alexander Dodge. The lighting design by Nicole Pearce puts the icing on on this confection and also has a life of its own. There are strip lights in the rails that flank the stage and stage entrances on each side and respond to, and sometimes move, the action. The blend of colors that wash the stage when Frank Jr. calls Carl at Christmas is gorgeous. The costumes by Alejo Vietti are also inspired—from the iconic Yves St. Laurent, Mondrain-inspired 1965 cocktail dresses (and shirts) to the gorgeous, slinky gowns of Paula Abagnale and the uniforms of the pilots and stewardesses, um, flight attendants.

There isn’t great emotional depth here but it is an amazing true story with a happy ending we all need. If you are looking for a night of fun and visually dazzling theater that flashes back to a simpler time, “Catch Me If You Can” is the ticket.

Safety Protocols: All patrons aged 12 and older who visit the Mead Center for American Theater and/or attend performances must be fully vaccinated by the date of their visit. Patrons can show either paper or electronic documentation of the COVID-19 vaccine (including photo of card). All patrons, staff and volunteers are required to wear facial masks that cover their mouth and nose. For more information, click here.