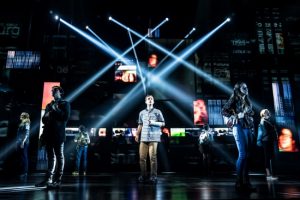 Last night I was at The Hippodrome Theatre for the National Tour of Dear Evan Hansen, starring Stephen Christopher Anthony in the title/lead role.

I had heard only a few songs form the 2015 musical hit. Of course, I knew that many young artists have a deep affection for this show, and also heard that some critics feel the performances and songs are stronger than the plot itself. The music and lyrics are by Benj Pasek and Justin Paul, famous for their work on “The Greatest Showman” and “La La Land.” Steven Levenson wrote the book for which he won the Tony.

I couldn’t agree more that this show is carried by its performances and a near-perfect score. Songs like “For Forever” and “You will Be Found” both showcase the impeccable technique of the singers, especially Anthony, and haunt us with their heartbreaking motifs. Precise, intuitive acting by every member of the cast draws out every possible moment of tears, laughter, and shock as we are taken first through Hansen’s desperate need to connect, to the awkward stumbles toward connecting through an increasingly pathological web of lies, to his ultimate tragic confession. It was perfect theatre. And I hated it.

…Everyone needs to see this show…it’s an excruciatingly honest look at the deep flaws in all humanity, with incredible songs and flawless performances.

I’m serious, Ben, I hated it with a visceral passion that only speaks to the strength of the material. I have honestly never seen a production whose characters so thoroughly lacked redeeming qualities, and whose actions consistently belied the sympathy that their pain and isolation demanded.

In a show where the central plot is a lie, everyone is lying to someone else or to themselves. Everyone has blood on their hands for one reason or another, even though no one actually killed the featured fallen youth, Connor Murphy, other than himself.

Yes, it is Evan’s lie that drives the rising action, partly to explain Connor’s signature on his cast and what appears to be a sort of suicide note to Evan by creating a fictional friendship, partly to get his chance with the girl of his dreams, and partly to have a family that makes time for him. Thus, I cringed when he tried to kiss Zoe and somehow cringed more when she kissed him back. I wanted to strangle Evan when he exposed the original letter and brought the vengeful hand of the blogosphere down upon the family, just so he could “prove” that he really was Connor’s best friend.

Yet, every character has their own hamartia. Family-friend Jared Kleinman (played by Alessandro Costantini) is quick to provide the technological façade needed, mostly so he can make a quick buck.  Heidi Hansen (Jessica E. Sherman) is quite literally never there for her son and yet resents him for finding comfort with others. Connor’s mother, Cynthia Murphy (Claire Rankin), at least missed her son’s self-destructiveness and possibly enabled it. Father Larry Murphy (John Hemphill) neglected his son in life and now resents him in death. Sister Zoe Murphy (Stephanie LaRochelle) and student advocate Alana Beck (Ciara Alyse Harris) are the least problematic of the characters, but even their motivations are suspect. Zoe, for possibly good reasons never discusses the apparent abuse she suffered at the hands of Connor, later emphasizes how Evan’s lie saved her parents (saying literally nothing about dead brother himself). Even the most rudimentary critical thinker will observe the tender father/son “To Break in a Glove” number and wonder if Larry even gave Connor the chance to play a game with him while he was alive.

By showing the frailty of every character, the genius of this show is that one turns the lens across and inward. A constant raging voice inside my own head accompanied an evolving feeling of dread toward our entire species. The show tries extremely hard to reaffirm the notion that no one is forgotten. This is literally the message of “You Will Be Found.” During the reprise, however, my inner voice was screaming: Evan wasn’t found! In fact, the character ultimately reveals that even the promise that someone will come and save us is a lie, for no one came to save Evan after his failed suicide attempt.

The production design was minimalist but exceedingly clever. David Korins ( from “Hamilton”) was credited as scenic designer, Emily Rebholz with costume design, Japhy Weideman with lighting design, and Nevin Steinberg with sound design. Most of the show was spent in relative darkness, decorated by a few specials and a montage of digital periaktoi that serve as the major scenic elements. On these ever-shifting digital towers, fragments of emails, Facebook statuses (like TFW), lyrics from the songs (such as “Everything is different”), faces of the actors (especially when they are the subject of internet buzz) were displayed (projections being the work of Peter Nigiri). Korins’ trademark economical choices worked well. The same bedroom unit was used for Hansen and Murphy’s rooms, and the mere quarter turn established an entirely different locale. The most spectacular moment came in the final scene, when the back wall ascended and a blinding dawn scape filled the theatre— necessary, if heavy-handed metaphor for the new day rising a year after the core events of the musical. Much of the design wasn’t especially noticeable, which in a show like this is perfect. There were no mistakes in the execution of sound; the costumes fit the characters so well they seem a part of them.

You need to see this show, Ben. Everyone needs to see this show. It’s an excruciatingly honest look at the deep flaws in all humanity, with incredible songs and flawless performances.

“Dear Evan Hansen” runs through March 20, 2022 at The Hippodrome Theatre of The France-Merrick Performing Arts Center. 12 N Eutaw Street, Baltimore MD 21201. For more information and tickets, click here here. Masks and proof of vaccination are required. For more information, go to their website.