Theatre Review: ‘Into The Woods’ at the Annapolis Opera, Maryland Hall 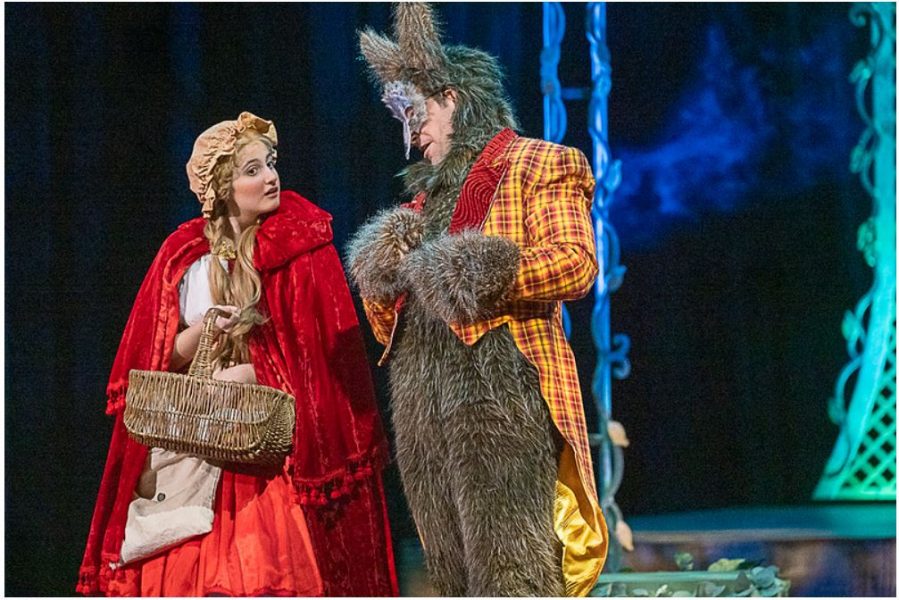 The Annapolis Opera has taken the Stephen Sondheim and James Lapine classic musical, “Into the Woods,” and created a one-of-a-kind journey, sauntering through the beloved Brothers Grimm fairy tales. The opera format has breathed new life into musical, projecting throughout Annapolis. Craig Kier (Maestro, Artistic and Music Director) brilliantly leads the chorus through one enchanting melody after another. His hands and body sway with the chords in a vibrato cooperation, almost as if he is creating the measures with his fingertips. The Maestro was conducting the Annapolis Symphony Orchestra who were captivating as they highlight each storyline seamlessly, harmoniously lifting each song in affinity with each performer’s styles. There is added humor with the sound effects during the action—a cow bell, triangle for magic, etc. They have 60 years of artistic excellence in the area, which was proven here.

The Director/Narrator and Mysterious Man, Dean Anthony, opens the play wearing old fashioned pajamas and a sleeping cap, settling in to read a children’s story. With ‘Once upon a time’, we are quickly introduced to Cinderella (played by Emma Grimsley), Jack and his mom (played by Mathew Hill and Diana Dimarzio), and the Baker and his wife, (played by Patrick Kilbride and Colleen Dale). All sharing the stage, each within their own storyline. The set was designed by StageCraft Theatricals, which were unique, spartan, and fantastical. The director’s choice to have each story come alive while the others were frozen, was most entertaining. Christopher Brusberg, lighting designer and production manager, managed to divert our view by lighting the story in action, and dimly lighting the still ones. This allowed for multiple stories to begin and spin their tales. There were countless innovative stage directions that helped the piece come alive and flow effortlessly through each storyline. This helped the audience keep up with the action.

Elizabeth D’Antonio was the costume coordinator and Priscilla Bruce was the wig and makeup designer. The costumes and hair were period, colorful, and somewhat magical. The childhood memories of these tales all come rushing back in my mind as they appeared on the stage, as well as the moral learned from each tale. These were soon forgotten by the characters because they all made mistakes in their narratives which, when intertwined with others, keep growing exponentially until there was a storm of mayhem. As in all storms, there is a point at which there is a moment of calm and peace. That is where we found ourselves at the end of Act 1, thinking happy thoughts as all the stories resolved and everyone lived happily ever after…or did they?

This is a good time to back up a bit and summarize the first act to get the reader up to speed. Once upon a time, in a far-off kingdom, lived a fair maiden, a sad young lad, and a childless baker and his wife. The story lines for Cinderella and Jack are basically the same and the twist occurs when the witch breaks into the Baker’s place. He and his wife are told of a curse on their home because the Baker’s father had dealings with the witch. She comes to them to bargain, offering them a child if they help her obtain four items in the woods. This involves all the characters in the other stories. Little Red Riding Hood (enthusiastically played by Kylee Hope Geraci) is introduced to the Baker when she is goes to get some sweets for her granny. Together, all the characters perform the titular song, as the sets are moved off the stage and the woods appear.

Act Two begins normally enough until the Baker’s house is reduced to rubble by a giant. The slain giant has a wife and is on a rampage against the town in revenge. The witch turns on the narrator and throws him to the giantess, not realizing that they have no one to tell their stories. It seems they all do not live happily ever after all. There is good news and bad news, but know that the good wins out in the end. The Baker, Cinderella, Jack, and Little Red Riding Hood sing “No One Is Alone” together as one voice that travels to the heavens and into our hearts. Allowing for the characters’ (and maybe our own) healing to begin—showing how to pick yourself up and to start over—illustrates just how vital fairy tales are for our humanity.

Advisory: Recommended for ages 8 and up.

“Into the Woods” ran March 18-20, 2022, presented by the Annapolis Opera at Maryland Hall, 801 Chase Street, Annapolis, MD 21401. For more information and tickets on upcoming productions, call the box office at 410-263-5544 or click here. Proof of vaccination and masks required.