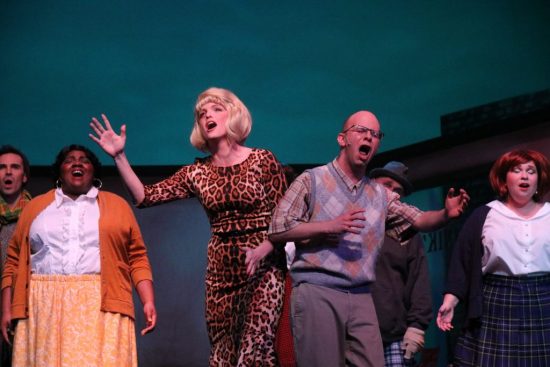 Autumn Mallory as Audrey and Jake Jaffe as Seymour in “Little Shop of Horrors.” Photo courtesy of Port Tobacco Players.

“Little Shop of Horrors” has quite the seasoned production history. The original 1982 Off-Off-Broadway production was based on a dark, comedic film by the same name from 1960 (that, of all random things, had a very young Jack Nicholson in it). The stage production transformed the story into a musical penned by Disney’s Alan Menken and Howard Ashman. It altered certain characters and completely erased others in order to make the story more coherent and suitable for the stage. A movie was produced in 1986 that altered the normally horrific ending in order to be deemed more suitable for a broader audience. It has since been revived on Broadway in 2003 (with some of the best puppetry ever seen on stage), had West End productions, and currently resides Off-Broadway in a reinvented, intimate version of the show.

“Kyle Rappe…delivers…primarily by ensuring that its two main characters Seymour and Audrey (played by Jake Jaffe and Autumn Mallory) are brilliantly cast and directed to take the audience with them on their journey.”

The story centers around a nerdy florist named Seymour who works for a less-than-kind owner, Mr. Mushnik. His only other coworker is the poorly-positioned Audrey with whom Seymour is secretly in love. One day, Seymour purchases a mysterious plant that has a rather unusual appetite for human blood. Once the plant begins to thrive, the florist shop, and by extension, Seymour, begin to gain popularity and wealth. From there, the story paints a picture of what one man is willing to do in order to hold onto those commodities. Scattered throughout is plenty of dark humor and social satire.

Director Kyle Rappe aptly infuses the show with an adequate amount of camp. His direction remains faithful to the original intent of the musical and feels comforting in its familiarity to a person who is already well-acquainted with the source material. There aren’t any crazy deviations from most other “Little Shop” productions, and that’s a good thing. The key to this show’s success is in its ability to lean into the camp and learn from its predecessors. Rappe delivers on this, primarily by ensuring that its two main characters, Seymour and Audrey (played by Jake Jaffe and Autumn Mallory), are brilliantly cast and directed to take the audience with them on their journey.

As with all recent PTP productions, Tommy Scott has perfected the art of lighting design. His thoughtful lighting cues allowed for seamless transition between musical numbers, with an appropriate amount of blackouts without causing the show to feel disjointed. By bathing different actors in light during pertinent moments of the show, he adds depth to the scenes.

Costume design by Caroll Russell and Janice Nash Sagers further enhanced this ridiculous tale. The costumes were period appropriate and further highlighted the characters, especially in the color choices for each of the urchins. The frequent costume changes continued to maintain the urchins’ primary colors throughout. Hair designer Quentin Nash Sagers created some absolutely luscious wigs, especially with the urchins’ unique choices and styling.

The actors who stood out were Jake Jaffe as Seymour, Autumn Mallory as Audrey, and Charnice Frazier as Chiffon. Jaffe plays a wonderfully believable Seymour. He is the quintessential nerd—meek and quirkily charming, the sad-sack boy next door. His physicality feels honest and heartwarming and makes the ending all the more of a gut punch. Mallory imbues Audrey with an internal sadness that takes her from a two-dimensional caricature to a deeply complex woman who is the unfortunate by-product of her less-than-fortunate surroundings. I felt myself rooting for her as she attempted to achieve her suburban freedom from Skid Row. Frazier gives Chiffon a welcome hilarity and honesty— her sassiness felt true and refreshing.

The wide appeal of this show comes with the fact that it is now considered somewhat of classic in the theatre world. It has familiar sounding tunes and allows the audience to accept the absurdity of a human-eating plant. PTP manages to ground the story in a way that makes the production very enjoyable. However, remember this: no matter what anyone tells you, don’t feed the plants!

PTP is currently requiring proof of either vaccination or a negative PCR test for all patrons 13 and over. Mask usage is also required.