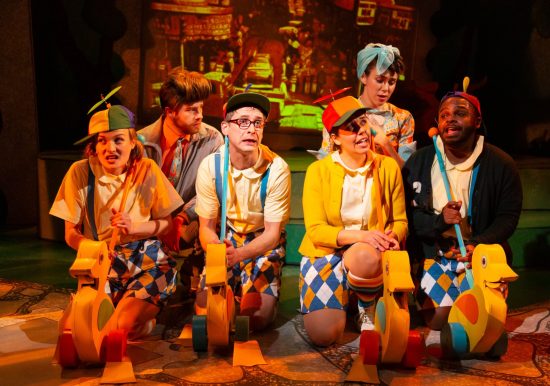 Line up, little ducklings! It’s time for a journey to 1940s Boston for a musical retelling of the Caldecott Medal-winning children’s book, “Make Way for Ducklings” at Adventure Theatre MTC. This classic tale by Robert McCloskey—a childhood staple, if you ask me—may be best known for his illustrations, first done in charcoal and then lithographed onto zinc plates. This particular production was scheduled to make its world premiere as part of the theatre’s 2020-21 season. Due to the pandemic, they staged a virtual reading of the script in May 2020).

This heartwarming story is one that’s worth sharing with your little ducklings—just don’t be surprised when they leave the show yelling, “Pizza. Pizza. Pizza. COCONUT!

“Make Way for Ducklings” is the story of a husband-and-wife duo of mallard ducks looking for the ideal place to birth and then raise their brood of ducklings in Beantown. McCloskey’s original story is the official children’s book of the Commonwealth of Massachusetts, and in 1987, artist Nancy Schön installed a set of bronze statues depicting a mallard with eight ducklings in a line in Boston Public Garden. There’s even an annual Duckling Day parade in Boston. This is one iconic book.

Thank goodness that the script by Michael Bobbitt and Sandra Eskin (who, interestingly, currently serves as USDA Deputy Under Secretary for Food Safety)—as well as the music and lyrics by William Yanesh—does justice to McCloskey’s original work. Be warned, the puns are plentiful, and every word relating to ducks—quack, fowl, and the like—is up for wordplay, but luckily, they mostly land.

Director and choreographer Ashleigh King keeps a snappy pace for the production, which is particularly important when entertaining a crowd of kids. I was accompanied by my attention-deficient eight-year-old who, much to my chagrin, has never been interested in cracking open our copy of the book which has sat on his shelf since before he was born. He is the best litmus test of whether a child can stay engaged in a show.

That engagement starts with the set designed by Sarah Beth Hall which featured a colorful representation of a park and included homage to its source material, with large tiles engraved with some of the book’s original text. The centerpiece is a digital screen on which various backdrops are projected. I’m not generally a fan of digital scenery in theatre (it seems to be a trend, especially in large touring productions), but it worked well here—especially when those projected backdrops were images of the book’s illustrations. I cannot overstate how delightful this was. Kenann Modjeska Quander’s costumes were equally cute and colorful, especially when it came to the titular ducklings. Prop and puppet designer Andrea “Dre” Moore created my absolute favorite thing about the production: four rolling, duckling puppets (who, along with the four duckling cast members, make up the entire brood). They had webbed feet attached to the wheels, so when they spun around, they matched the classic pitter-patter of duckling feet.

As for the cast, there wasn’t a single quack in the bunch (Bobbitt and Eskin aren’t the only ones who can make duck puns!) Jordan De La Moral arguably worked the hardest, playing the role of not only the noise-hating, ticket-giving police officer in Boston Public Garden, but also a number of other characters that could easily converse with ducks. Graciela Rey and Ben Ribler as Mrs. and Mr. Mallard, respectively, played perfect parents-to-be. Each of the actors who played ducklings (Rebecca Ballinger, Alice Squeglia, Joshua Street, and Taylor Witt) were so thoroughly and entertainingly committed to their character’s quirky personalities.

This heartwarming story is one that’s worth sharing with your little ducklings—just don’t be surprised when they leave the show yelling, “Pizza. Pizza. Pizza. COCONUT!”