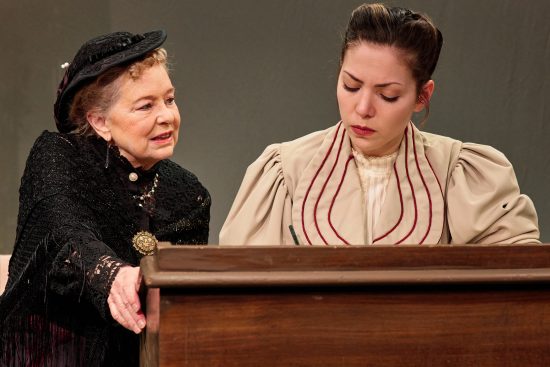 The Washington Stage Guild has produced a thoughtful and handsome meditation on women’s choices and society’s limits and judgments. Playwright George Bernard Shaw also cleverly focuses on the judgments women place on other women, sometimes without realizing how these judgments reflect the patriarchy. It’s easy to understand why this play was considered so scandalous in 1902. It’s still scandalous to many people that women should have a say in their lives even now. Of course, Shaw chose the not-discussed-in-polite-society topics of unwed motherhood and prostitution as his shot across the bows.

…thoughtful and handsome…timely and engrossing, but more importantly, it softly lures you into a world of secrets, lies, and a shaky footpath to truth.

The action centers on a visit by Miss Warren’s mother—the aforementioned Mrs. Warren of dubious reputation—to visit her adult daughter. Mrs. Warren’s contact with her daughter over the years has been sporadic, partly to safeguard her daughter’s reputation. During this visit, Miss Warren, who is adamant that she will succeed in making her own way in the world using her brains, will get an education in the grays of the world.

This play is especially thought-provoking during National Women’s History Month. One can see the shimmering line running from the amused disbelief that a woman might have a thought of independence to much of today’s actions against women’s bodily autonomy. Historically, few have less bodily autonomy than women who have little choice but to use their bodies to simply survive. It wasn’t until 1882 in the United Kingdom that married women were allowed to actually have property to themselves (their own clothing, land, money, food, etc.). So for a single woman such as Miss Warren, disavowing marriage ensured some measure of independence.

All of the actors are nuanced and sublimely believable in their roles—Rachel Felstein as Miss Vivie Warren; Lynn Steinmetz as Mrs. Kitty Warren; R. Scott Williams as the Rev. Samuel Gardner; Will Rothhaar as the reverend’s son, Frank; Peter Boyer as Mr. Praed; and Carl Randolph as Sir George Crofts. It is wonderful to watch Felstein grow from an over-confident young woman, certain of all her opinions and positions, to a more tempered pragmatist, capable of acknowledging control is illusory and people are fragile. Steinmetz (who played Vivie Warren in the 1991 Guild production) is priceless in the role of Mrs. Warren, with layers of artifice, calculation,  manipulation, and genuine remorse infusing her portrait of a woman who is self-absorbed to a fault, but a survivor (I could hear echoes of Sondheim’s “I’m Still Here,” from “Follies” in her bravura performance).

But it’s Randolph, as Sir George Crofts, who soars in a chilling portrayal of a man who makes his fortune off the backs of women (he is Mrs. Warren’s silent partner as the investor in a series of international brothels which has made them both rich) and yet imagines that Miss Warren would be girlishly thrilled and honored to become his wife. He’s old enough to be her grandfather. When she refuses him, his rage and disbelief are frightening. In a beautifully telling gesture, when he is putting forth his proposal, he casually lays a hand on shoulder in a display of ownership even as he speaks over her. It’s a telling moment.

Michael Rothhaar mines every nuance out of the script and his team joins in whole-heartedly. Scenic design coordinator Megan Holden has designed a simple set that with a few changes in the back fencing and the two doorways at opposite ends of the stage turns the set into an idyllic garden to a churchyard to a London office. Sìgrid Jóhannesdóttir has designed perfect costumes that give us clues as to status and inclinations of each character. Lighting designer Marianne Meadows plays the lighting like an alto sax.

WSG’s “Mrs. Warren’s Profession” is timely and engrossing, but more importantly, it softly lures you into a world of secrets, lies, and a shaky footpath to truth. Let’s hope it’s not another 30 years before the next one.

Show Health and Safety Protocols: Requires all persons attending performances to show a photo ID and show proof that they meet the CDC definition of being fully vaccinated a the time of entry into the theatre with a physical or digital cop of their vaccination card,  AND to wear a mask inside WSG (including during the performance). In addition to audiences, we have also mandated COVID vaccinations for performers and theatre staff at the Guild.