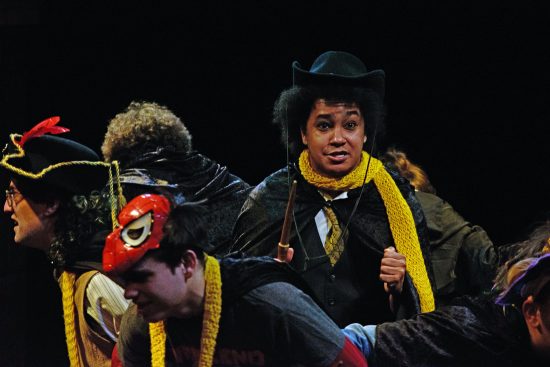 “Puffs, Seven Increasingly Eventful Years At A Certain School of Magic and Magic” or more likely known as “Puffs” is currently playing at The Audrey Herman Spotlighters Theatre. It is a clever romp through the Harry Potter universe told by some energetic and horribly misguided Hufflepuffs. These characters might not be known to most, but they spend the seven years of school paralleling the activities of other more famous characters and deal with the same worries of making friends, finding love and fitting in.

This production is enthusiastic, high energy and surprisingly tender. Stephanie “Dozie” Mendoza begins the play as the Narrator and is charming throughout as she guides and informs the audience of the passing school years.

The story revolves around three main characters, Kyle Hermary as Wayne Hopkins, David Lustig as Oliver Rivers, and Shannon Willing as Megan Jones. They all do a fantastic job of portraying very honest characters in a madcap world. The trio, along with their classmates, occasionally run into the violent and delusional “Harry” and his hand-puppeted two best friends as each year is filled with stories of others fighting the dark lord, turning back time, and the goblet of fire.

Adrian Graham-Chesnavage takes on the role of the most famous Puff, Cedric, and doesn’t disappoint. He is a joy to watch as he righteously reigns over the other Puffs as a larger than life character that is made for the stage.

Zach Husak takes on nine roles and is great in everyone, my favorites are Zach Smith and the Fat Friar. All the actors give it their all and there is not a boring moment in the entire show. We can all use a laugh these days, and “Puff” won’t let you down.

Spotlighters Theatre is set in the round and the stage is set up on a platform with the pillars that would fit right in at Hogwarts painted like ancient stones. The stage floor is covered with a fabulous circle depiction of the zodiac signs that adds to the magical world.

As the seventh year draws to a close and the battle of the dark lord comes to the school, the Puffs choose to stay and fight and find that their bravery and courage is all they need to no longer always be fourth. There is only one weekend left to get lost in this “Potter verse.”

Running Time: Approximately two hours and 25 minutes with one intermission.