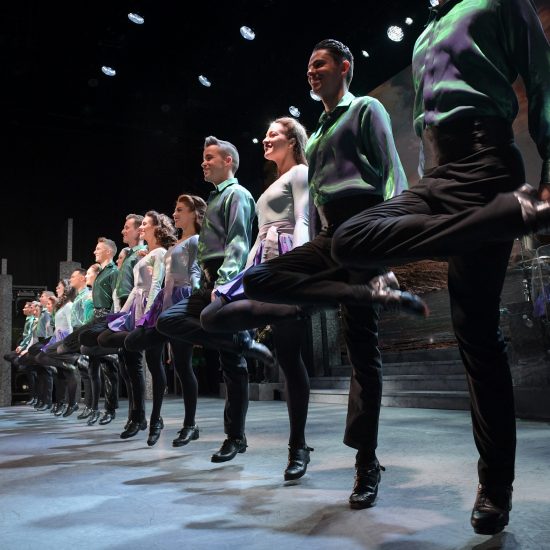 Yes, they are stomping by again. A year after the dreaded cicadas, a decidedly more pleasant syncopated sound filled our ears and engulfs our senses. I will attempt to use the word phenomenon only once, but “Riverdance” is back and, surprisingly, appearing at the Kennedy Center for the first time.

The return of “Riverdance” is a thunderous sign that the two-year, arts and life reset is over. Creator, Sir Terry Wogan, announced to the eagerly anticipating St. Paddy’s day audience that the cast and crew had to abruptly stop their tour in March 2020 at Radio City Music Hall. Everyone connected with it had to find their way home. Now reunited and on the road again, this is billed as the reimagined “Riverdance” 25th Anniversary Show. After more than 15,000 performances, you would think that this sound and motion spectacle might cause a few “ho hum” reactions from the performers and to those  who have experienced the show several times. Not a chance.

This being the comeback tour of the Irish dance and music extravaganza, the creative minds felt compelled to inject added visual and audio effects. Veteran “Riverdance” followers will appreciate the quite amazing 3D animated backdrops that give each scene new perspective—a realistic babbling brook or a haunting moonlit night.

The show originally featured the oversized ego and testosterone-glazed machismo of Michael Flatley, juxtaposed with the technical brilliance and ice maiden sultriness of Jean Butler, both Irish dancing champions. Since that personality-driven inception, the ensuing editions of “Riverdance” have been true ensembles, with many interchangeable parts supporting the show and swapping out the two lead dance roles, sometimes thought of as the thematic Lord and Lady of the Dance.

Fergus Fitzpatrick and Amy-Mae Dolan were the male and female leads, with Dolan a near double for Simmons as a fiery, flaxen-haired lass. Fitzpatrick is fit as a fiddle (as we later see in the pastoral scene with Dolan) and exhibits a sunny smile and technical brilliance throughout the show. Throughout the tour’s run, lead dancers Will Bryant and James Greenan will rotate in as the male lead and Anna Mai Fitzpatrick, Maggie Darlington, and Meadhbh Kennedy will do the same as the female lead, due to the strenuous nature of the show.

Reimagining aside, the creators know their bread and butter. The classic Irish, syncopated dance lines thrillingly open and close the show, interspersed with many other vignettes from Irish folklore and other dance traditions, notably Russian and Spanish. Even the main dance choreography is credited to Flatley and Simmons, so little has changed. But that is not an issue.

One of the fascinating vignettes in the show is the performance by flamenco impresario, Rocio Dusmet, in “Firedance.” We watch her amazingly evocative movement, and then, unexpectedly, she is joined by two of the male Irish dancers. The mix of styles brought together onstage was eye-opening.

Speaking of contrasting styles, one of the highlights of the show was “Trading Taps” featuring the bravura performances of American tappers Dharmish Patel and Tyler Knowlin. Showing the NY jive, street dancing style, their freelance tapping was technically exquisite and joyful, actually showing much more variety of motion than the Irish dancers that joined them in an onstage tap-off. A stunning explosion of tapping speed pushed the dancers to the limit. Reminiscent of “West Side Story,” the Irish and African American tap dancers went back and forth, exchanging routines, to the raucous delight of the crowd, before the dancers joined together in cultural unity.

The musical accompaniment, especially the fiddle, worked well as a counterpoint to all the movement, if a little long at times in the solos. The musicians—fiddler Haley Richardson, drummer/bodhran player Mark Alfred, saxophonist Emma Frampton, and Tara Howley on ullean pipes/concertina—were accomplished and engaging. The singers were competent, but in such a fast moving show, the songs actually slowed down the momentum.

I especially enjoyed the pastoral scene, reminiscent of “A Midsummer Night’s Dream,” with Fitzpatrick and Dolan showing their versatility and physique with slow, sensual ballet moves.

Costumes by Joan Bergin were effective—males are in streamlined black attire and women in lighter garb to capture the lights. Composer Bill Wheelan has kept the natural flow of musical success, though the bass needs some toning down. Director John McClogan knows the show well and has integrated the parts admirably. But the essence of “Riverdance” is ensemble-driven uniformity of motion—at times nuanced, at times explosive. It is at its best when the troupe is aligned left to right with purpose and power, and it always works.

If you‘ve not seen “Riverdance,” the experience is unforgettable.

“Riverdance” runs through March 27, 2022 at the Opera House, John F. Kennedy Center for the Performing Arts, 2700 F St NW, Washington, DC 20566. For tickets and information, go to this link.  For more information on upcoming performances at the Kennedy Center, go to their website.