Theatre Review: ‘The Adventures of Mr. Toad’ at Creative Cauldron 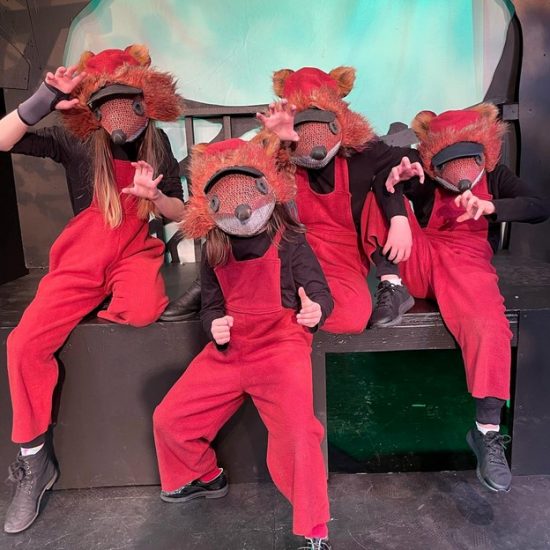 Chief Weasel, Carmen Ortiz, and the Chorus of Weasels, Amalya Monroe, Henry Gill, and Ridley Epstein in “The Adventures of Mr. Toad.” Photo by William Gallagher.

Based on “The Wind in the Willows,” Kenneth Grahame’s classic children’s story, “The Adventures of Mr. Toad” is a lively journey into the world of Mr. Toad (Ben Graham/E. Agustus Knapp) and his friends, Rat (Emerson Thiebert/Lorien Jackson), Mole (Emma Howell/Elaina Rosenberger), Badger (Audrey Burke/Valentina Thomas), and Otter (Sophie Silva/Marianne Meade), a band of good-natured creatures who do their best to save the free-spirited Mr. Toad from his love of high-living, fast cars, and questionable choices.

…family theatre at its best.

Written by Ellen Selby and PJ Audenzia, with music by Matt Conner, this new musical begins with the vain and self-involved Mr. Toad’s announcing he has decided to write his memoirs. A series of flashbacks follows, during which Mr. Toad gets himself into trouble with the authorities for his reckless driving (Margaret Kruckenberg and Madeline Corley as the Cops), a trial ensues (Ava Bitici as the Bailiff and Ella Yazdani and Nora O’Sullivan as the Judges), and he lands in jail.  He manages a daring escape (Matilda Phillips as the Warden’s Daughter and Alec Goldenberg as the Engineer) only to find his mansion has been taken over by a gang of weasels (Carmen Ortiz as the Chief Weasel and Amalya Monroe, Henry Gill, Ridley Epstein as the Chorus of Weasels), who refuse to leave. Mr. Toad’s friends come to the rescue, banishing the weasels and quickly restoring order amongst the animals.

Director Laura Connors Hull has assembled a large cast of spirited young people whose vocal and dance talent shine in musical numbers “Nobody Does it Like Toad,” “Pop! We’re the Weasels,” and “Movin’ Along.” Scenic and costume designer Margie Jervis created a simple set, balanced by elaborate masks that transformed the cast into creatures great and small. Notable among them, the Little Mice (Claire Corley, Madeline Varho, Emre Silva), the Chorus of Rabbits (Lead Rabbit Matilda Phillips and Madeline Corley, Ava Bitici, Ella Yazdani as the Chorus), Duck (Margaret Kruckenberg), and the charming and humorous Delivery Mouse (Diana Alison).

“The Adventures of Mr. Toad” is family theatre at its best. With music, dance, and witty dialogue, this musical is poised to introduce a new generation of children to Toad and friends, and it gives adults who met the animals in Grahame’s classic years ago the chance to become reacquainted with these sometimes wise, and always lovable, characters.