Theatre Review: ‘The Folks at Home’ at Baltimore Center Stage 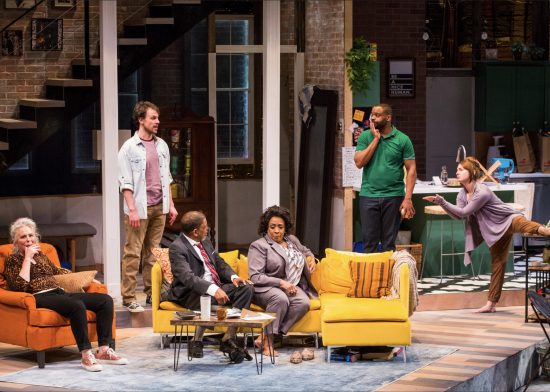 The world premiere of “The Folks at Home” at Baltimore Center Stage invites us into a slightly cluttered, but cozy, house somewhere in our fair city of Baltimore. Designed by Simean “Sim” Carpenter, the set is full of the artifacts of a life built together—from the plants to the couches to that little sea-star-in-a-seashell that your parents think is ridiculous but have kept their mouth shut about since your wedding. The set, in a series of off-kilter geometries—the triangle of the roof’s soffit suspended overhead, the front door facing forward on the same plane as the living room, the floating second floor, the swaths of brick that turn sheer to reveal Ma brushing her teeth—creates a space that is simultaneously seamless and overlapping, stuffed with nooks and crannies and yet wide open for the actors to play and to connect. While the home is extraordinarily built out, it never feels crowded or jumbled. The understated and skillful lighting design of Sherrice Mojgani highlights the space. Sound designer Frederick Kennedy’s playlist at the top of the show (which includes a specially made theme song) nurtured a playful atmosphere. Harry Nadal’s costume design made the characters feel even more themselves.

This play is possibly the funniest, wittiest, and most meaningful comedy I have ever seen on stage.

We first meet Roger (Brandon E. Burton), who stands in the backyard with a Tibetan singing bowl, and Brandon (Christopher Sears), who is trying to get ready for work. The playwright took inspiration from the family sitcoms of the 70s. This lineage is obvious from the very start—mail in the fridge, talk of a ghost, and wedding invitation that smells like Jude Law. The popcorn-paced humor and lightness is reminiscent of the wittiest of TV comedies. Sears’ delightful zaniness and Burton’s impeccable timing accentuates this golden dialogue. The heightened mundanity of their packed-yet-easy domesticity is sweetened by the simple care they show each other, by the actors’ authentic affection, and by the intention they put into all their interactions.

Pretty soon, the house fills up—while the recently fired Roger sits at home, his parents Pamela (E. Faye Butler) and Vernon (Eugene Lee) arrive, asking to stay following a foreclosure. That very night, Brandon’s mom, Maureen (Malcom in the Middle’s Jane Kaczmarek), arrives with her worldly possessions, having been kicked out of her apartment. All the parents are phenomenal. Butler brings a grace and a confidence to Pamela that never becomes stuffy or disengaged from what’s happening around her. She’s buoyed by an incisive and moving humor and love for her husband, son, and son-in-law. Vernon is old in the most amusing of ways, constantly throwing back to his own outdated experiences and offering his thoughts about his sons life. While deeply annoying for Roger, it’s a riot for viewers. Lee brings Vernon to life in a way that is archetypal without being a caricature. He tempers Vernon’s absurdity with an underlying emotional depth that arises to great effect when the scene calls for it. Kaczmarek goes all out to bring to life Maureen’s non-stop gabfest, with topics including vampire bats, the social habits of Walmart, and The Gays™. It would be very easy to play Maureen as a clown, but every bit of Kaczmarek’s performance feels authentic and real, whether she’s opening up about her mistakes and her dead husband or laughing maniacally at Pamela quoting Sartre. Last, but not least, I have to mention Alexis Bronkovic, who plays both Alice, the white maid (the parents make a very big deal about this), and Brittany, Brandon’s sister. Alexis’ brings both to life, infusing them with personality and unselfconsciousness, while keeping them delightfully and compellingly distinct—Brittany is revelry and an anchor; Alice is a chaos.

The moving in of the parents, and all the subsequent frustrations they bring with them, accentuates the primary conflict of the play—Roger and Brandon can no longer afford their mortgage, but Roger loves their house and doesn’t want to let go. This tension highlights the nuance in Burton and Sears’ performances. The former reveals heart-wrenching layers of grief, adrift in his professional life and terrified at the thought of losing yet another sense of place, and the latter tempers his trademark quirky energy with a groundedness and hope that feels like home.

These performances, all of which are simultaneously uproarious and human, bring to life the fantastic words of Baltimore native R. Eric Thomas (read his “A Quick 5” interview here)—the cleverness of his dialogue and the ingenuity of his hijinks is matched by his mastery at combining humor and depth. A lesser playwright would structure a scene by interspersing occasional moments of emotional weight like speed bumps in a series of jokes. Thomas interweaves his lightness and gravity seamlessly, so that humor and heart strengthen each other in the same moment. He creates a universe with remarkable internal consistency, bringing back gags again and again, such that at times the play feels like one big inside joke with the audience. He gives so much attention to every character and every relationship that every possible pairing, parent-parent or parent-son, has its moment.

Thomas deals with so many themes—the expectations we have for ourselves and our loved ones; what it means to make a home; class; race; family; work; grief; growing up; getting old—but, like the set itself, it never feels confused or overburdened. The nuance with which he approaches these topics, eschewing the dichotomy of heroes and villains for a subtlety that allows for perspective, flaws, uncertainty, and laughter is remarkable and commendable. Few writers have such a generosity of spirit for all of their characters, and Thomas has so much to teach us on this front. While there is so much to learn from the play, it never feels didactic or unnatural.

All the brilliance of the performers and playwright is, of course, midwifed by director Stevie Walker-Webb. Walker-Webb has orchestrated a brilliant tempo that keeps the humor alive, fast-paced but not incoherent, while allowing for moments of slowness and breath around which so much meaning turns. Some silences are heavy and some are animated, but none of them are empty. Small moments abound, from Alice-the-maid’s stretching during the family meeting to the hiding and finding of Maureen’s cigarette, that speak to a keen attention to detail. The expansiveness of the characters and the great sweep of their emotional lives have obviously been nurtured by a caring hand.

This play is possibly the funniest, wittiest, and most meaningful comedy I have ever seen on stage. I want to say more, but it’s as simple as that. Please, please, please go see it—theater is back. This play is home.

“The Folks at Home” runs in-person through April 10, 2022 at Baltimore Center Stage, 700 North Calvert Street, Baltimore, MD 21202. For more information and tickets, call 410.332.0033 or click here. For information on COVID protocols, please visit here. This show is also available for streaming and can be purchased here. Performances will be streamed April 6th through 10th.