Theatre Review: ‘The Merchant of Venice’ at the Shakespeare Theatre Company 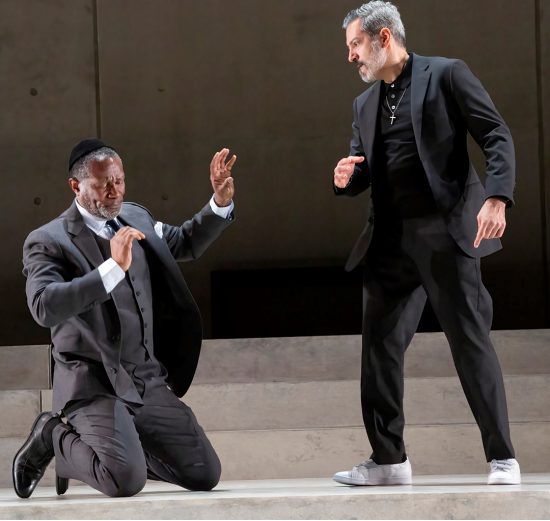 When Shakespeare wrote “The Merchant of Venice,” it was done as comedy and the hero and heroine did not die—that was the differentiation at the time between a comedy and tragedy. Comedies like “Much Ado About Nothing,” tragedies like “Hamlet,” and some farces, for instance, “A Comedy of Errors,” relied mostly on sight gags and some melodrama, which some of the Bard’s history plays are categorized such as “Richard III.”

See this production for its historical insights into the plight of minorities and for the interesting concepts by director Arin Arbus. If you see it for no other reason, see it for the inspirational performance by John Douglas Thompson.

The character that one remembers most clearly in “Merchant” is Shylock. Jews in Shakespeare’s day were on shaky ground in England. The country was rife with antisemitism and they were expelled by Edward I in 1290 and technically not welcome back until after Shakespeare’s lifetime. To make matters worse, Rodrigo Lopez, a Jewish, Portuguese doctor in Queen Elizabeth’s court, was accused of attempting to murder her highness. Marlowe’s successful “The Jew of Malta” actually may have been an inspiration for Shakespeare’s Shylock.

Shylock’s character is perplexing to Shakespearean scholars. Did the playwright wish us to have compassion for him or have his comeuppance at the end (when his daughter Jessica marries out of her faith and converts) be fodder for the antisemites of his day? Every producer and director this play has to decide how they will treat Shylock. Should he be sympathetic? How is anti-semitism in Venice portrayed? Did Shakespeare have insight into the prejudices of his audience in 1605 which included the royal court? All this has to be decided before the play is even cast.

Jews in the early 16th century were forced to live in a ghetto and had to wear clothing that would distinguish themselves from Catholic Venetians. In most of Europe, they could have businesses inside the ghetto, but only moneylenders and doctors were allowed to operate outside them. Many in the Mediterranean region were Sephardic and darker skinned than their northern European counterparts.

In Shakespeare Theatre Company’s current production, directed by Arin Arbus, Shylock and his family are Black. Many Moors were also forced to leave the Iberian Peninsula due to the Inquisition. “Othello” also takes place in Venice and Black Shylocks go back to the early 1800s when Ira Aldridge played the character. Arbus states, “…By casting a Black man as Shylock in America (today), one becomes painfully aware of the connections between Shakespeare’s 16th century Venice and our world now.” Arbus spotlights a tragic Shylock against a comic background.

Portia (Isabel Arraiza) is a beautiful heiress looking for a husband. Her betrothed will be decided by the man who chooses the correct chest (out of the three options made of gold, silver, and lead) that holds her picture. Portia is attracted to Bassanio (Sanjit De Silva), a young, handsome Venetian and hopes he will make the right choice. Unfortunately, he has gotten himself into financial trouble. His best friend, the merchant Antonio (Alfredo Narcisco), agrees to back a loan for him from the moneylender, Shylock (John Douglas Thompson). Since Antonio has several ships doing business on various routes at sea, he believes he will be able to repay the loan before it comes due. Shylock lends the money on the condition that if it is not paid on time, Antonio must give him a pound of flesh. Meanwhile, Shylock’s daughter, Jessica (Danaya Esperanza), wants to elope with Antonio’s friend, Lorenzo (David Lee Huynh) and convert to Christianity.

The actors who play Shylock and Portia are essential to the success of the production. John Douglas Thompson is a sympathetic and a gut-wrenching Shylock who lets the audience know why he hates Antonio so. We are made to feel his contract for a pound of flesh is justified in light of the indignities he has suffered because of his religion. Shylock’s famous speech comparing Jews to Christians is recited most persuasively.

Arraiza is exceptional as Portia. As with many of Shakespeare’s women, she is willful, strong, clever, and a bit of a tomboy. She pulls off her male impersonation in a most believable way. We also do not have trouble believing that men have traveled all over the world to gain her hand in marriage, her wealth aside.

Esperanza’s Jessica is a gullible young woman (she would be around 16 in Elizabethan times) who has second thoughts about her decisions. I am not sure that was part of Shakespeare’s intent but Arbus most certainly feels that Jessica has regrets.

Antonio and Bassanio are portrayed as shallow and not very clever. Narcisco’s Antonio has a cruel aspect to his character, especially towards Shylock. He is also not terribly brave, requiring a woman to pull him out of his predicament. He exposes the merchant’s other-than-noble side to the audience. With De Silva’s portrayal of Bassanio, we are never sure which he loves more—Portia or her wealth. De Silva, like Narcisco, balances our distaste with some likability.

Huynh’s Lorenzo is dark and some of this seems attributed to Arbus’s vision, not Shakespeare’s. This Lorenzo is an abuser, thief, and cad—more interested in the wealth of his wife’s family and how to get control of it than he is in love with Jessica. Huynh hides this from the audience and Jessica. It is a shock to everyone when he reveals his true character. (After rereading “The Merchant of Venice,” I am fairly sure this was not Shakespeare’s intent as this was a comedy. Endings needed to be happy except for the villain.)

Another actor that shines is Nate Miller as the comic relief, Lancelet Gobbo. He is also a vehicle the playwright uses to make points about the poor treatment of slaves and to give us insight into the period’s mind-set about converts to Christianity.

The rest of the talented cast includes Shirine Babb—a counterpoint to Portia—as Nerissa, her servant.  She is also used many times for comedy as is her husband, Gratiano. He is portrayed, at times, as a clueless and drunken fool by Haynes Thigpen. Both have good timing and chemistry in their scenes together.

Varin Ayala and Maurice Jones play the two suitors of Portia—the Prince of Arragon and the Prince of Morocco—both with dignity but also with a lot of humor. Jones also expertly plays the Duke and Tubal. The rest of the Venetians are adeptly performed by Jeff Biehl as Balthazar, Yonatan Gebeyehu as Solanio, and Graham Winton as Salerio.

The play is staged in contemporary clothing by costume designer, Emily Rebholz. In her opening scene, Portia is jogging and boxing in modern, athletic wear. Shylock wears a three-piece suit with religious, Jewish accessories. The other men either wear suits or casual attire, with a few exceptions.

The set design by Riccardo Hernandez is also modern and stark. It is a façade could be a marble edifice in Venice, with several Roman-looking steps coming down from the façade. There is also a one-story-high circle in the structure, utilized in Jessica’s scene with Lorenzo. The director has the actors enter from the audience several times, which lighting designer, Marcus Doshi, must light as well as the stage.

This is a unique interpretation of “The Merchant of Venice.” Arbus’ fine direction helps to conceptualize her ideas on stage. It is clear she sees the two Jews, Shylock and Jessica, as victims of the pervasive antisemitism of Europe—not just of those ancient times, but throughout modern history. Her ending, definitely not in the original, underscores that point. She also sees the three male protagonists as self-absorbed and unaware of their cruelty.

See this production for its historical insights into the plights of minorities and for the interesting concepts by director Arin Arbus. If you see it for no other reason, see it for the inspirational performance by John Douglas Thompson. You will not be disappointed.

Advisory: Not for young children due to some sexual situations. The topics may be a little unsettling to younger people and should be seen with an adult.

“The Merchant of Venice” runs through April 24, 2022 at the Shakespeare Theatre Company in the Michael R. Klein Theatre at the Lansburgh, 450 7th Street NW, Washington, DC 20004. For tickets go to this link. Click this link for Covid-10 restrictions. Parking available near the theatre, and there is public transportation within two blocks of the theatre.