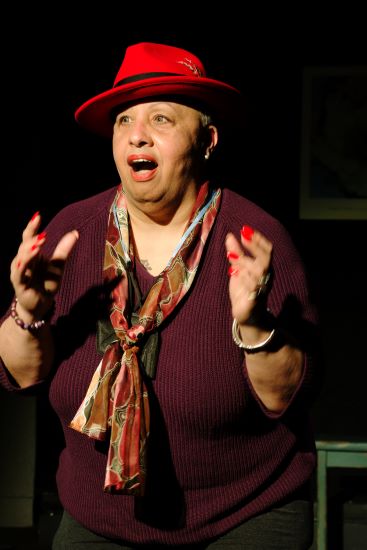 “The Vagina Monologues” was conceived and written by Eve Ensler in 1996. It is currently being presented by the Laurel Mill Playhouse, produced by Maureen Rogers and directed by Hillary Mazer Stishan. This production, like so many others, was slated to open in March of 2020 and had to wait two years to make it to the stage. Things change, but this group of women were determined and realized that this play was important for women and men to see even if it’s been over 25 years since the original was produced. In 2006, Charles Isherwood of The New York Times called it, “probably the most important piece of political theater of the last decade.” A V-Day non-profit was established and has raised millions for groups working to end violence against women.

…should be seen no matter what your sexual orientation.…moving, funny, and important for the empowerment of women everywhere…top-drawer.

Since its off-Broadway success and an Obie Award, this play has been produced in 90 countries. In the U.S., it has played in Madison Square Garden and is performed yearly on hundreds of college campuses. There has even been an all-transgender production.

Many of the monologues were from the original but every year, a new monologue is added to deal with relevant, topical issues. Some are rich with humor, like “My Angry Vagina.” But many of them are gut-wrenching. “My Vagina was My Village” is a compilation of testimonies from woman of the Bosnian War where tens of thousands of women were raped and mutilated. “Under the Burqa” brings to light mistreatment of Moslem woman in countries where beating women, forcing all females to wear burqas, and brutal castrations of young girls (sometimes by very unsafe methods) are condoned or even law. There has also been also a great deal of controversy from both sides of the political spectrum from feminists to social conservatives. The monologue, “The Little Coochi Snorcher That Could” deals with an underage girl being seduced by a 24-year-old woman. The criticism of that story led to changing the age of the girl from 13 to 16 and dropping the words “good rape” from the dialogue.

This is an ensemble production and all the actors bring their own special perspective to their roles. Each part they play has a little bit of themselves in it, so each one is unique to this production. To say that one performance is better than another would be like saying one of these women is better than another. They are a whole and should be viewed that way. The impressive cast includes Lorraine Brooks, Rosalie Daelemans, Leena Shrivastava Dev, Maia Krapcho, Marge McGugan, Malia Murray, Meera Narashimhan, Patty Seitz, and Jacqueline Youm. Not every woman could get up on stage and talk freely about this subject. This is a group of strong and talented women.

Stishan’s direction is also what makes this production work. She moves the actors around the stage from group monologues to individual ones very smoothly. Each actor gets her chance to connect with the audience. No one ever blocks out someone else which, on this small stage, is a feat in itself. Stishan also did the set design which includes sensual pictures by artist Georgia O’Keefe.

Jen Sizer does a superlative job with the lighting design. She focuses each speaker perfectly in stage light. Sizer and Malia Murray also are responsible for the sound design which includes several relevant musical pieces.

“The Vagina Monologues” is a play that should be seen no matter what your sexual orientation. It is a play that remains relevant to all audiences. It is moving, funny, and important for the empowerment of women everywhere. This production at Laurel Mill Playhouse is top-drawer.

Advisory: For mature audiences only due to language and sexual situations.