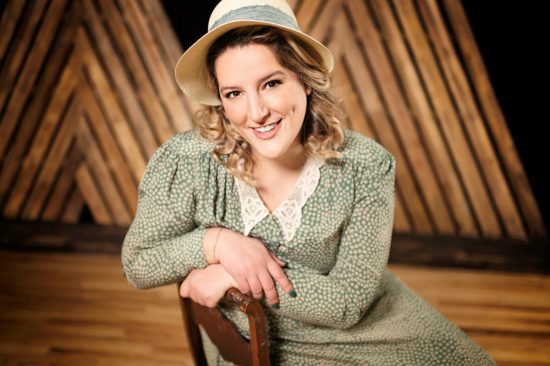 Reston Community Players current show is “Bright Star,”created by comedy legend Steve Martin and Grammy winner Edie Brickell. It tells a sweeping tale of love and redemption set against the backdrop of the American South in the 1920s and ‘40s. This richly emotional story weaves together two chapters in the life of literary editor Alice Murphy; the first, as a young backwoods girl in love with the son of a prominent family; and the second, as a mentor to a young soldier just back from the war. Propelled by a rousing country and bluegrass score and brimming with charm, “Bright Star” is a refreshingly original and daringly hopeful theatrical journey that will hold audiences tightly in its grasp.

“This unique bluegrass score, which is unlike anything you’ll find in any other musical theatre production, is being brought to life on our stage through a collaboration with the Capital Area Bluegrass and Old-Time Music Association. caboma.org “
Cody Boehm is so excited to be making her RCP debut with such an incredible cast and creative team. Originally from the DC area, Cody has been performing professionally since childhood, doing theatre, television and commercials, as well as voiceover work. Since graduating with a BFA in Musical Theatre from Pace University, she has performed at such venues as Lincoln Center, Joe’s Pub and 54 Below. She has also been seen in a number of off-Broadway and regional productions throughout the country.
You started young as a performer. When did you know this was what you wanted to do?
I remember standing on a stage for the first time as a kid and feeling so at home. I had never felt anything like it. It was the closest thing to pure magic I’ve ever felt. It was from that moment on, I knew this was what I was supposed to do.
What do you like doing most – theater, TV, commercial work, or voice overs?
Theater, no contest. You get one chance to show your work and live in the moment you have created on stage in front of an audience. It’s so special and organic.
Talk about your experiences performing in New York.
I loved living and performing in New York. The work I found myself doing the most was working with composers on new works being developed. I was also lucky enough to be asked to do various concerts at Lincoln Center, 54 Below and Joe’s Pub at The Public.
What has it been like returning to the DC area and working on “Bright Star” with Reston Community Players?
I feel so at home here. Having grown up in Alexandria, it’s nice to come back and be welcomed into such a beautiful community. Even though I had never worked with the Reston Community Players before, I would come back in a heartbeat because they have just been so wonderful and everyone, on and off stage, is unbelievably talented!
What is up next for you and do you have any dream roles or goals you haven’t tackled yet?
In terms of what’s next for me, I don’t have anything lined up at the moment. I’m in grad school at the moment so I might just focus on that. As for dream roles, it would probably be Dot in “Sunday in the Park with George.” Really, I would do anything Sondheim.
“Bright Star” runs April 22, 23, 29, 30, May 1, 6, 7, 8, 2022 and performs at CenterStage at Reston Community Center, 2310 Colts Neck Road, Reston VA 20191. The production is directed by Richard Farella, music directed by Josh Cleveland, choreographed by Paige Wakefield and produced by Janet Bordeaux. For more information and tickets, please click here.
______________________________
Reston Community Players (RCP) is a 501 c3 non-profit organization that has been producing quality theatrical productions since 1966. RCP has brought to the public a variety of theatrical experiences over the years and is committed to theatrical excellence and professionalism through the promotion of diverse, creative experiences for the education and cultural enrichment of the community. Partially funded by grants from ArtsFairfax, RCP welcomes all and offers something for everyone.