A Quick 5: with Murry Sidlin, Conductor, ‘Defiant Requiem: Verdi at Terezín’ at the Strathmore 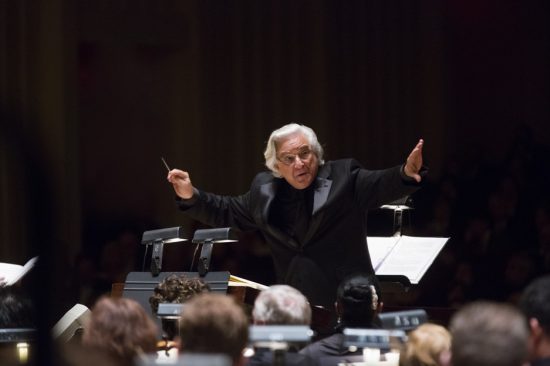 On April 20, 2022 The Defiant Requiem Foundation presents “Defiant Requiem: Verdi at Terezín” at the Strathmore in honor of the musicians of the Terezín Concentration Camp. This will be the 20th Anniversary performance of this memorial production. It is also only a week before we honor those who died during the Holocaust, Yom HaShoah. The Orchestra of Terezín Remembrance will be conducted by Murry Sidlin who is also the creator of “Defiant Requiem: Verdi at Terezín.” It will include performances by soprano Jennifer Check, mezzo-soprano Ann McMahon Quintero, tenor Cooper Nolan and bass baritone Nathan Stark. It also will feature the American University Chamber Singers (Daniel Abraham, Director); The Catholic University of America Verdi Choir (Murry Sidlin, Interim Conductor); Longwood University Camerata & Chamber Singers (Pamela McDermott, Director); University of Virginia Chamber Singers (Michael Slon, Director); Virginia Commonwealth University Commonwealth Singers (Erin Freeman, Conductor); and the Virginia State University Concert Choir (Patrick D. McCoy, Interim Director).

The program not only includes a complete live performance of Verdi’s masterpiece, but the music will be interspersed with actual historic films of the brave musicians, with testimony from survivors along with a narration of these heroic performers. These Jewish prisoners smuggled in a score of the celebrated oratorio which they performed sixteen times while living in the “depths of human degradation.” The most famous of these is the time they performed before the SS and an International Red Cross delegation.

Sidlin’s inspired rendition has been performed all over the world in many venues since its opening concert at the Portland Expo Center with the Oregon Symphony with Maestro Sidlin conducting.   Perhaps the most moving were three concerts actually performed at Terezín.

Sidlin also has a new concert-drama, “Hours of Freedom: The Story of the Terezín Composer,” in which actual music written by the prisoners is performed.

Murry Sidlin is President and Artistic Director of The Defiant Requiem Foundation and creator of the concert-dramas “Defiant Requiem: Verdi at Terezín,” “Hours of Freedom: The Story of the Terezín Composer,” and the play, “Mass Appeal, 1943.” He is also an internationally recognized educator who lectures extensively on the arts and humanities as practiced by the prisoners in the Theresienstadt (Terezín) Concentration Camp.

He was on the NASA committee—chaired by the late astronomer Carl Sagan—that was responsible for selecting the contents for “The Golden Record,” carried by the Voyager spacecraft. He is the recipient of the Distinguished Alumnus Award the Peabody Conservatory of Johns Hopkins University; the medal of St. Agnes of Bohemia from the Archbishop of Prague; and the Simon Wiesenthal Center’s Medal of Valor.

Do you have any personal connections to the Holocaust, or, are you like most whose hearts go out to those who suffered?

My family absolutely has personal connections to the Holocaust. One of my earliest memories is being at a family gathering as a youngster. I was playing with my cousins in the living room, and the adults had all gathered in the other room talking in hushed voices. I later learned that it was because they received a letter from someone in Riga, Latvia, where my family was from, telling them about the massacre there; about how the Einsatzgruppen (the “mobile killing unit”) were gathering together Latvian Jews and shooting them. I would have been four or five years old at the time, and it has stuck with me ever since.

Of all the places you have conducted “Defiant Requiem: Verdi at Terezín”, which are most memorable?

Obviously, there are so many memorable performances of “Defiant Requiem.” The world premiere 20 years ago and the first time we brought it to Terezín. But the two that stick in my mind the most are Berlin and Israel, and I’ll tell you why. There is a point near the end of the concert where I tell the audience, “The prisoners didn’t ask, ‘Where was God?’ But they asked, ‘Where was man?’” In Israel, after I said that line, you could hear whimpering and weeping in the audience. Two years later in Berlin, when I delivered that same line, there was silence. Absolute silence. Nothing but the air ducts and the air moving in the hall.

Did you ever meet or hear from any survivors of Terezín or their families?

The survivors from Terezín are my teachers. The first survivor I met was Edgar Krasa. He was one of the first prisoners in Terezín, and became the roommate of Rafael Schächter, who was the conductor of Verdi’s “Requiem.” They were roommates for several years and actually Edgar was the first recruit to join the singers of the Verdi “Requiem.” From there, Edgar introduced me to a number of other survivors. Marianka Zadikow May, the late Eva Rocek, and her husband, Jan Rocek, and Vera Schiff. Through them, we met Felix Kolmar in Prague and Zdenka Fantlova who now lives in London and just celebrated her 100th birthday.

And now, as we tell this story, every place we go, we meet someone who we learn has a connection to Terezín. It’s frequently people who were in Terezín, like Fred Terna, who came up to me after I spoke at a school in New York some years ago; or Pedro Seidemann, who saw an advertisement for our performance at Lincoln Center in 2015, came to it, and then introduced himself to me backstage.

Can you tell us what was your inspiration for your concert-drama “Hours of Freedom: The Story of the Terezín Composer” and how and where did you get that music from the fifteen imprisoned composers?

The music in “Hours of Freedom” comes from a variety of places. First, all of the music we play survived one way or another, some of it intact, some of it in pieces. Some of these scores were handed from one prisoner to the next as the first prisoner was being loaded onto a boxcar and deported to the East. Others were hidden behind walls or under floorboards. Some of this music is published by major publishing houses, and others came to us from sources in the Czech Republic. We also got some scores from the archives of Professor David Bloch, which is held in a collection at the United States Holocaust Memorial Museum in Washington, DC.

You worked with the late, great Aaron Copland. Can you tell us a little bit about that collaboration—maybe an anecdote you remember?

I met Aaron Copland when I was 15 years old, after a concert at Baltimore Museum of Art. Years later, when he came to the National Symphony to conduct, and I was on the staff, we had an arrangement. I would take him to dinner anywhere he wanted to go, as long as I could bring along the scores of his music and we could go over them together. Over the years, we did this many times, and went through so much of his music.

On one of his visits, he was conducting the orchestra suite from his opera, “The Tender Land.” I hadn’t ever heard it and was struck by its beauty—and its “Coplandesque” originality. I blurted out to him, “Is the rest of the opera any good?” I saw his smile disappear and his jaw tighten, and he replied, “Yes, m’boy, I think it is.”

I immediately realized how arrogant I sounded…I’d like to think that all of that arrogance is in my very distant past. I stumbled out an apology, which instantly lightened the moment.

It was a great honor to interview Murry Sidlin. In these times, it is important to remember that even under the most horrible conditions, people can retain their human dignity and art can flourish even when these horrors are unfathomable.

This is a concert that should not be missed whether you are Jewish, Romany, LGBTQ, or even Ukrainian. The evil tentacles of the Nazi’s tried to erase all of these groups. This presentation should remind us once more, “Never again!” Sometimes we all need someone to keep the candle of humanity burning. As citizens of the world, let us all thank Maestro Sidlin and the others, both on stage and behind the scenes, who are bringing this momentous concert-drama to our area.

“Defiant Requiem: Verdi at Terezín” will be performed on Wednesday, April 20, 2022 at 7:30 pm at the Strathmore Music Center, 5301 Tuckerman Lane, North Bethesda, MD 20852. For tickets and information about this concert, go to this link.