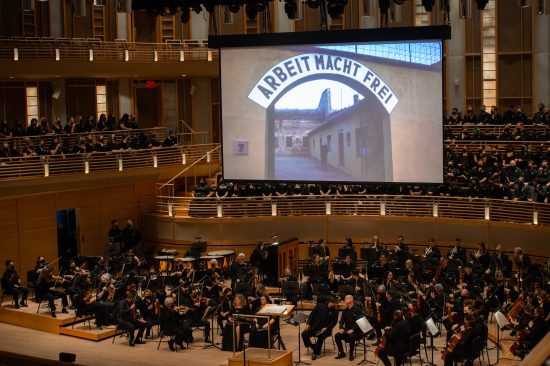 Theresienstadt, which became known as Terezín, was a Nazi concentration camp located near Prague.  The Nazis built the camp to divert attention from their other horrors. Artists of all kinds were sent there and they still had to work hard, lacked food and medical care, and dealt with the cold winters without proper housing or clothing. Eventually 150,000 Jews would pass through the camp. Many were eventually sent to extermination centers or camps that were even worse. Only 15% of the inmates at Terezín survived.

…one of the most momentous concerts I have ever heard performed. It allows us to see humanity in inhumanity. It gives us hope and yet, it is profoundly sad.

The prisoners had privileges that were not allowed in other camps so the Nazis could use them as a showcase for propaganda. They could have lectures, teach children, and, after long days of work, practice their art.  They were even allowed to practice their religious beliefs. As the war went on, life at the camp became harsher. A documentary of the camp was made by the Nazis purporting that Terezín was really a spa. The inmates who were forced to help film this propaganda were killed or deported to other camps, including all the children seen playing during the filming— 15,000 children died.

In 1944, the Nazis decided to prove their humanity by bringing a few members of the Red Cross to the camp. Rafael Schächter was a musician and a graduate of the Prague Conservatory. He managed to smuggle in Verdi’s score and, with only a piano, he organized a choir of 150 people. They performed the piece 16 times. By the time the Red Cross show was presented, they were down to 60 choir members.  Although the piece is part of Catholic liturgy, the Jews at Terezín made it their own. (No one questioned why Jews would so willingly sing Catholic liturgy.) They used the passages that spoke of retribution in the hereafter to “speak” to their captors. They also used the passages paying homage to the dead as their way of saying “Kaddish,” the Jewish prayer for the dead and their long suffering and slaughtered family and friends. It was the music itself that allowed the prisoners to mentally escape their horrible existence into a realm where they could reclaim their humanity. Schächter would be deported and died shortly before the end of the war on a forced march. He did not even live to 40.

The concert-drama opened with film projected over the orchestra, showing the survivors of the camp, including members of the choir. These clips were continually interspersed with the “Requiem” which made the music more meaningful to the audience. Sidlin, Stuve, and Manning spoke to the audience to give the context and history of both the camp, Schachter, and the choir. Those monologues were both chilling and moving.

It was the last part of the program that brought home the message from the prisoners at Terezín. We were shown the propagandized documentary with Verdi’s music playing in the background. The concert master and solo violist, Herbert Greenberg played “Oseh Shalom” which ends the Mourner’s Kaddish in a Jewish service. The choir and rest of the orchestra slowly filed out. As the choir left they sang the words until just the violin was left. Finally, we were asked to give a moment of silence instead of applause.

While you might be interested in finding out more about Verdi’s “Requiem,” Verdi was not the focus of this concert. The point of the concert was to underscore how art can help us keep our humanity. We see this today as the Ukrainians cover their statues as their cities are being bombed. Schächter understood that keeping the prisoners’ spirits alive might keep them physically alive. It gave them hope, courage, and a reason to live another day.

Although all the sections of Verdi’s choral music were masterfully done, Section II: “Dies Irae” was the most emotionally powerful. Two movements, “Quid sum miser,” (whose Latin lyrics translate to “What shall I, a wretch say then? Whom shall I ask to plead for me, when scarcely the righteous are safe”) and “Lacrimosa” (when they sing, “That day is one of weeping on which shall rise again from the ashes the guilty man, to be judged”) were most poignant. You could imagine the Jewish choir trying to vilify their captors with their voices. Later in Section III, “Offertoria,” we felt the despair as they sang “deliver the souls of all the faithful departed from the pains of hell from the bottomless pit.” Finally, in Section VII, ‘Libera Me,’ you could picture the inmates singing with calm and hidden hatred, “The day of wrath, that day, of calamity and misery, a dreadful and exceedingly bitter day” as they knew their own fates and probable demise would be decided by their captors.

“Defiant Requiem: Verdi at Terezín” was probably one of the most momentous concerts I have ever heard performed. It allows us to see humanity in inhumanity. It gives us hope and yet, it is profoundly sad. It should be seen by everyone.

Unfortunately, the presentation of “Defiant Requiem: Verdi at Terezín” by The Defiant Requiem Foundation played only one night. If it comes again to your area, make sure you get to see it, or if you are fortunate, you might catch another of Sidlin’s concerts, “Hours of Freedom: The Story of the Terezín Composer.”