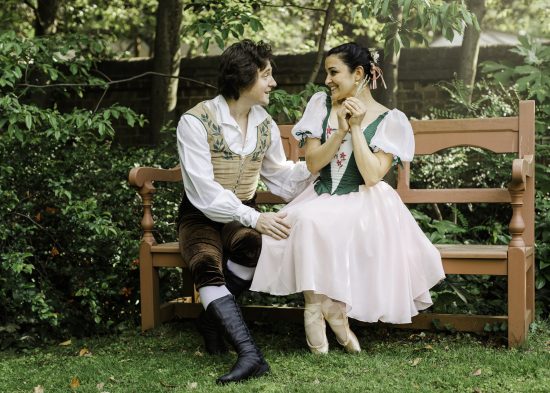 Subtlety has never been considered a characteristic of “Coppélia,” performed with flash, acrobatics, heart, and a huge dose of comedy by Ballet Theatre of Maryland (BTM). Based on the 1870 French rendition by Arthur Saint Leon—with Russian touches by Marius Petipa—BTM’s charming version closed the company’s season this evening at the Maryland Hall in Annapolis.

Perhaps we should call “Coppélia” the first feminist ballet, led by Swanhilda who outwits her fiancé. Franz, a village gadfly, ditches sweetheart Swanhilda for a more docile mechanical doll created by Dr. Coppelius (called “Dr. C” in this ballet). Swanhilda responds by turning the doc’s workshop into chaos, and wins back her errant lover.

Every sleepy little village needs a live wire to keep its townspeople awake, especially if the main shop in town belongs to an old, disillusioned doll maker, a role to relish in this version. Enter Swanhilda, the feisty feminist, and you know right from her first solo dance that this is the lass who keeps the village active and engaged.

As Swanhilda last night, Emily Carey delighted both young and old with her quick steps and her comedic touches. She sparkled on stage throughout the three acts, rarely faltering in her multiple pirouettes or high-flying jets, all danced to the gorgeous music by Leo Delibes. Ryan Massey is natural in his movement and totally believable as the town’s lover boy. Unfortunately some of the lifts were awkward but were corrected quickly, as he partnered one girl after another throughout the village.

Thanks to Swanhilda’s daring and imagination, her boyfriend Franz sees his mistake and marries the heroine in a wedding celebration of dance. Massey appeared as buoyant as the character he played.

Most times the plot is humorous, but when Alexander Collen sensitively portrays Dr. Coppelius with his hopes for a real daughter in lieu of the doll, you want to scream at the frantic behavior of the girls as they romp in the attic where his treasures are stored. Here the wretched old man takes on a humane, caring characterization, and by the end of the ballet, he is welcomed by all…even a kiss from Swanhilda.

From an historic point, Act II is quite significant. Not only are the gestures fascinating, but the choice of dolls—the Scottish lass, the adorable Jack-n-Box , a soldier (Isaac Martinez delights), Hannah Hanson as an Arabian Princess, the Chinese duo (Cassandra Hope and Michael West), and of course, the soulful Coppélia, portrayed exquisitely by Olivia Fohsz who held perfectly still despite so many distractions.

What makes the silly story ballet work is the dedication to detail by choreographer Dianna Cuatto, with assistance by BTM’s current director Nicole Kelsch who spoke before curtain with a special nod to her mentor. Among the standouts in the ballet were Emily Carey, partnered by Ryan Massey in “Love,” and ballerinas Cindy Case, Hannah Hanson, Cassandra Hope, Sarah Jung, Celia Merritt, Carrie Cornelius, and Victoria Siracusa who was stunning in her solo. As for the men, I couldn’t keep my eyes off Michael West who dazzled us with his tricky moves and fabulous smile. Burgomaster Roman Mykyta kept things moving with his narration and leadership.

This “Coppélia” provided much more opportunity for character dancing than seen in some productions. It is especially evident in the third act wedding scene where most of the familiar dancing takes place, especially the Mazurkas and Czardas. Loved the colorful costumes, boots and head pieces by a BTM team, including Brian Walker, Calder Taylor, Meagan Helman, Alyssa Johnson-Taylor, Karen Kralik, Karissa Kralik, and Aaron Bauer. Kudos too to the lighting designer Stacie Johnson-Leske an whoever created the sets to make us feel we were part of the ballet.