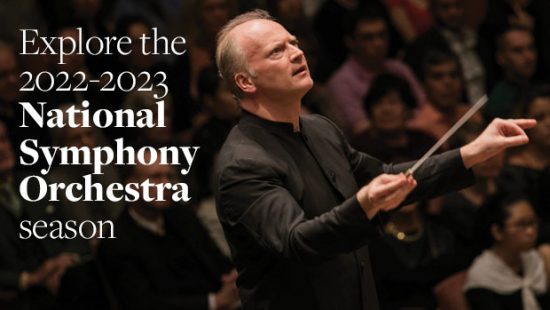 (WASHINGTON)—The National Symphony Orchestra (NSO), led by Music Director Gianandrea Noseda and Executive Director Gary Ginstling, announces its classical programming for the 2022–2023 season. The new season, during which Maestro Noseda appears in 14 programs and leads a total of 36 concerts, embodies the special connection between Orchestra and Music Director that has strengthened over the past five years. NSO Classical subscriptions for the 2022–2023 season are now available here or by calling (202) 416-8500.

“As I embark on my sixth season as Music Director of the National Symphony Orchestra, I continue to be overwhelmed by the artistry and commitment of the great musicians of the Orchestra,” said NSO Music Director Gianandrea Noseda. “This wouldn’t be possible without the symbiotic relationship we have with our audience and community, and their boundless support. The 2022–2023 season reflects our Orchestra’s past, present, and future with musical adventures involving a diverse group of artistic voices with long-standing bonds with the NSO and many who are joining us for the first time. Our overriding goal is to present the highest artistic quality in an open and inviting musical environment at the Kennedy Center. We welcome anyone and everyone to join us on what we anticipate to be extraordinary musical journeys.”

The 2022–2023 classical offerings celebrate the NSO’s past while serving as a catalyst for its role as an increasingly dynamic and innovative orchestra. This balance is seen throughout the newly announced season—from the performances of Leonard Bernstein’s MASS (the work that opened the Kennedy Center in 1971) and a program that nods to former NSO Music Director Mstislav Rostropovich (1977–1994), to the presentation of five new commissions (three of which are world premieres) and a score of artist debuts.

As previously announced, the Orchestra continues its commitment to performing and recording all five Sinfonias by George Walker, a native of Washington, D.C. and the first Black composer to win the Pulitzer Prize for Music. The first release, Walker’s Sinfonia No. 4, will be distributed digitally through the NSO’s record label on June 24, 2022, with subsequent releases through 2023 and 2024, and a physical album coming thereafter. Accompanying the digital releases are music videos, interviews, and behind-the-scenes content. NSO Music Director Gianandrea Noseda describes Walker’s sinfonias as “an extraordinary musical discovery.”

In addition to its regular subscription concerts, the NSO connects with the larger community in the D.C.-area through performances at The Anthem in D.C.’s The Wharf and Capital One Hall in Tysons, and through its ongoing series NSO In Your Neighborhood. The Orchestra also engages with classical audiences of the future through Family Concerts in the Fall and Spring.

“Now more than ever, the NSO is committed to bringing our community together to experience live orchestral music and to hopefully leave feeling refreshed and energized,” said NSO Executive Director Gary Ginstling. “Gianandrea and the NSO musicians have a relationship that continues to develop and blossom, and they are committed to making every evening in the concert hall a special one. With our range of programming and artists next season, we are confident that there will be something for everyone.”

Artists and performances are subject to change.

CONCERTS WITH MUSIC DIRECTOR GIANANDREA NOSEDA
Gianandrea Noseda will lead 14 classical programs in 2022–2023 to include:

These afternoon concerts are designed for young audiences, ages five and up, and take place in the Kennedy Center Concert Hall.

This four-concert series on Sunday afternoons in the Terrace Theater offers audiences the opportunity to enjoy chamber music performed by titled NSO musicians. The 2022–2023 season performances slated for 2 p.m. on November 20, 2022; January 29, 2023; March 19, 2023; and June 11, 2023. Programming details and performer names will be announced at a later date.

NSO IN YOUR NEIGHBORHOOD

The NSO maintains a robust community engagement program year-round, anchored by the annual In Your Neighborhood (IYN) program, which takes the Orchestra and chamber ensembles into community venues in a particular neighborhood for a concentrated period of activity. In the 2022–2023 season, IYN enters its 12th year with a return to Southeast, East of the River, and the neighborhoods in D.C.’s Ward 8, including Anacostia, Barry Farm, Congress Heights, Joint Base Anacostia Bolling, and Bellevue. A second week of IYN is planned for March of 2023, with the neighborhood details to be announced at a later date.

OTHER NSO SERIES AND PROGRAMS

NSO Pops, DECLASSIFIED® curated by NSO Artistic Advisor Ben Folds, The Anthem series, and programming at the REACH will be announced at a later date.