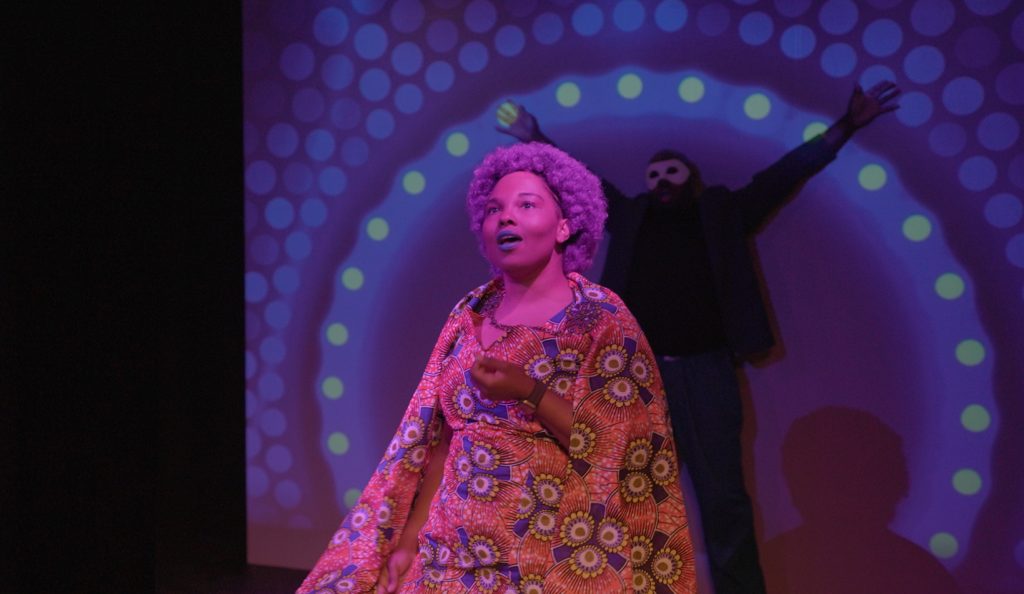 Seven years have passed since Tamir Rice. These years are producing a creative upheaval in the theater as playwrights raise defiant voices against broken systems and tragically wasted lives. It’s an outcry of righteous anger combined with a demand for justice that we haven’t seen on American stages since the height of the AIDS crisis thirty years ago. Like then, today’s authors give us genuine characters with personal stories. They amplify grief and outrage that are too easy for many of us to ignore.

Chicago playwright Inda Craig-Galván has a unique take on this. Her “Black Super Hero Magic Mama,” currently playing at Strand Theater, spends its first act acquainting us with a mother, Sabrina, and her son, Tramarion, wasting no time in letting us know that 14-year-old Tramarion is murdered by a white police officer. A nonlinear scene structure allows us to see more of the young man and his relationships. He and his best friend, Flat Joe, are writing and illustrating a comic book together. He is also close to Coach Brackett who’s training him for a “Know Your Heritage” TV quiz show. Aunt Lena also has an interest in Coach Brackett, but is more concerned with caring for her sister in the aftermath of “that day” when the killing happened.

Sabrina’s anguish drives her into a seclusion that’s more comatose than keening, while rally organizers and one eager TV news anchor are in hot pursuit of her words. Sabrina unplugs the phone and reads the draft of Tramarion’s comic book, featuring the superhero, Maasai Angel. Named for a people of eastern Africa, the Angel is a “descendant of the warrior tribe” who is out for truth and justice—basic superhero things. At the end of Act One comes the killer cop’s acquittal, and the world of the play is knocked completely off-axis. Sabrina, turning inward, takes up a long spear, dons a purple Afro wig, and announces herself as the Maasai Angel. This adopted persona comes complete with a Pam Grier edge (and soundtrack) and commences a crusade to destroy “The Entity.” To find it, she must first do battle with shady characters like Human Hyena and Deep Thinker, who appear thanks to role doubling. Not just doubling—these are characters within the grieving mother’s mind who are based on real-life people from the first act, à la Dorothy’s friends in “The Wizard of Oz.” The analog is certainly deliberate. Craig-Galván’s script makes reverent mention of Oz in its exposition, and predictably, the play resolves with a satisfying, but not-too-tidy, paraphrase of “there’s no place like home.”

Tyrel Brown as Tramarion and Isaiah Mason Harvey as Flat Joe have wonderfully natural chemistry on stage. When they deliver an easter egg reference to Nicky Silver’s “Pterodactyls” in the form of an argument over eggplant vs. aubergine, it’s delightfully believable and real. Brown and Harvey’s natural ease and pace are a great credit to Director Aladrian C. Wetzel (assisted by Sadia Alao), who does a lot of things really, really well in this production. Nikki Scroggins plays Sabrina with the perfectly tired exasperation of a single parent of a teenage son. Then, as the Maasai Angel, she keeps a tight grip on Sabrina’s sensibilities while amping up a tornado of fury. Fight choreography by Tegan Williams adds touches of violence that are much more comic bookish than realistic, in keeping with the second act’s feeling of otherworldliness.

Sabrina’s sister Lena is played by Kayla Manigault, with an outsider vibe in the first act that gives way to frustrated caretaker in the second. Karen Li plays TV news anchor Connie Wright, as well as villain Lady Vulture, with little subtlety as to her sinister intentions. The sidekick to both is Omololu Collins, the completely unironic reporter, Tom Blackman, and Human Hyena, respectively. Rysheem McGirt is all quiet strength as Coach Brackett and Alexander Scally does lovely work as the lost, repentant white cop. The two share a gorgeous scene near the end of act one, in which both struggle to communicate their sorrow and guilt about “that day” in letters to Sabrina.

In Strand’s production there is a LOT going on and Jennifer Smith’s stage manager superpowers are on full display. Michael Vincent’s set is split in half, between Tramarion’s bedroom and an open space for other locations and projections by Chris Uehlinger. Lighting by Amy Rhodes is evocative and effective. Sound by Christen Cromwell (assisted by Liam Michael Byrd) is VERY busy, sometimes chaotic even, and consistently well executed. Barbara M. Hauck provides a plethora of well-researched props (though the Angel’s spear looks a lot more Zulu or Turkana than Maasai), while Maggie Flanigan’s costume work is a splendid highlight of the show, establishing the characters’ alter ego shifts fancifully.

Overall, this is a clear example of Strand Theater’s recent work—a powerful script, a tight ensemble, and truly fine storytelling throughout.

Running Time: 136 minutes with one intermission.