Theatre Review: ‘Come From Away’ at The National Theatre 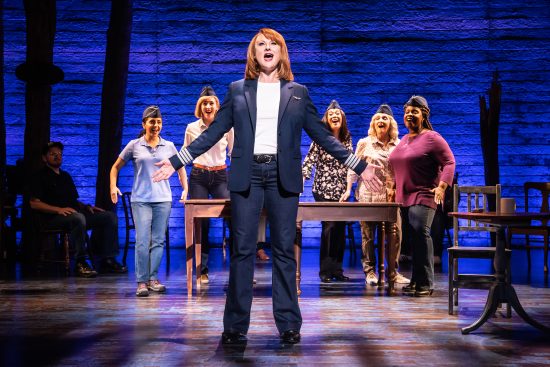 Marika Aubrey as Captain Beverly Bass and the female ensemble in the North America Tour of “Come From Away.” Photo credit: Matthew Murphy.

You are here at the start of a moment.

For me, that single, oft-repeated lyric in “Come From Away,” holds incredible meaning. The first time I was lucky enough to see the musical (currently running at The National Theatre in Washington, D.C.), I turned to my friend as soon as the band played off the stage and said, “I want to see that again.” I was in New York City on February 29, 2020. The next day, the first case of COVID-19 in New York had just been identified. Not even two weeks later, the world would shut down. It was the start of a moment—one that would cripple the theatrical community—and we had no idea what was to come.

…celebrates the power of community, no matter where you are or where you come from.

But “Come From Away” isn’t about that moment, even though it was a memory that I will never forget. It’s about another pivotal moment in American history, yet this story isn’t American. It’s not even truly Canadian, even though it’s set in Gander, Newfoundland. “Come From Away” celebrates the power of community, no matter where you are or where you come from. It’s a story that the world so desperately needs, if only to remember that there are people out there who do good things in the face of adversity.

With books, music and lyrics by Irene Sankoff and David Hein, “Come From Away” takes place over five days, starting on September 11, 2001. When the U.S. airspace closed after the attacks on the World Trade Center, hundreds of flights that were coming in from overseas had to be diverted. Thirty-eight of those planes landed at Gander International Airport, which was once where every airplane landed to refuel after crossing the Atlantic. By 2001, with the advent of jumbo jets, Gander would only get maybe six planes landing a day.

“Come From Away” is the story of how the residents of this remote town, and those that surrounded it. They took in 7,000 passengers and sheltered, clothed, and fed them for five days until the American airspace reopened.

You might think that this musical would be a heartbreaker. You might wonder how someone could even consider creating a musical about the atrocity of 9/11. But while you might need a couple of tissues, rest assured that you won’t leave “Come From Away” a blubbering mess. This musical is so full of heart and soul, and funny to boot—the laughs come far more frequently than the tears. That doesn’t mean that the show skirts the horrors of what happened that day. From the harsh reality of how Muslims were targeted with fear and hatred immediately after the attacks, to the devastation of firefighters lost in the WTC rubble, Sankoff and Hein face the worst of what happened without dwelling on the devastation.

The superb cast only heightens the sense of community that the show embraces. It’s a true ensemble with each of the 12 actors playing one or two named characters (most of them real people who were in Gander on 9/11), and a multitude of other roles. I wouldn’t be able to name just one or two standouts as they all deserve a mention: Sharone Sayegh (Bonnie), Harter Clingman (Oz), Marika Aubrey (Beverly/Annette), Julia Knitel (Janice), James Earl Jones II (Bob), Kevin Carolan (Claude), Jeremy Woodard (Kevin T./Garth), Chamblee Ferguson (Nick/Doug), Nick Duckart (Kevin J./Ali), Danielle K. Thomas (Hannah), Julie Johnson (Beaulah) and Christine Toy Johnson (Diane).

The cast aren’t the only ones on stage. The amazing musicians, who play a pivotal part of “Screech In” and at end of the show in a rousing romp, cannot go unmentioned and include Cameron Moncur, Isaac Alderson, Kiana June Weber, Billy Bivona, Martin Howley, Sean Rubin, Steve Holloway and Ben Morrow.

“Come From Away,” which did its pre-Broadway tryouts at DC’s Ford’s Theatre, only runs through April 17, so hurry and get tickets. For those of you who can’t make it, there’s an amazing pro-shot of the original Broadway cast on Apple TV. No matter how you see it, “Come From Away” is a story that everyone should hear.

Running time: 100 minutes with no intermission