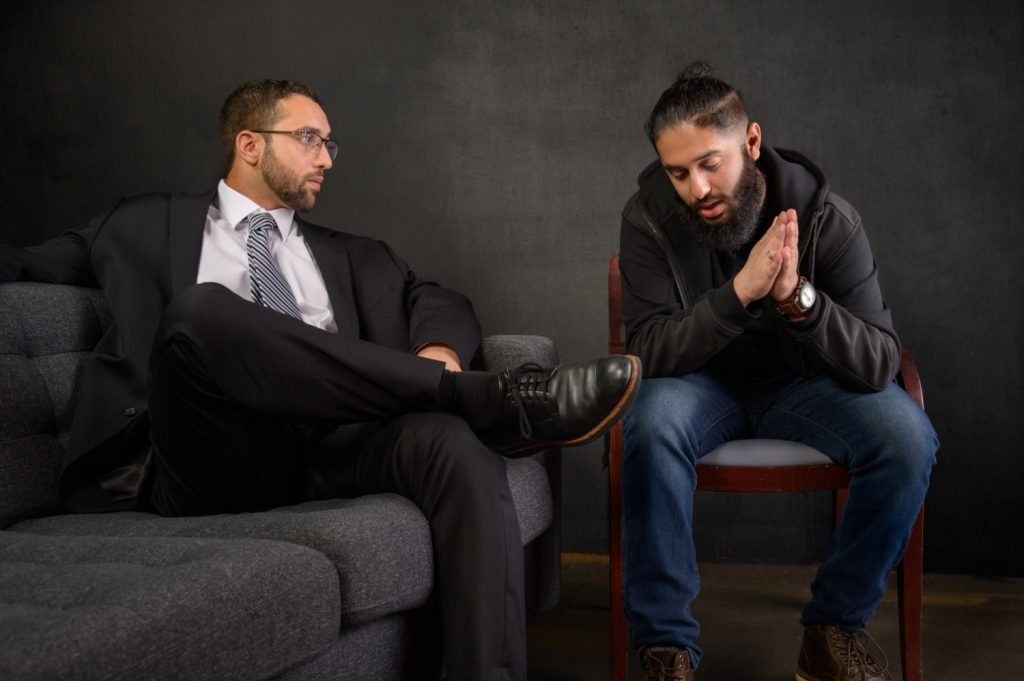 A doorman building in one of the fashionable artsy neighborhoods of lower Manhattan finds two couples getting together for an evening of drinking and vitriol. The hostess, a white artist, is completely absorbed by her devotion to a particular variety of non-western otherness. As liquor flows and tongues loosen, ugly biases and raw nerves are exposed. Things don’t end well.

That description of Vagabond’s “God of Carnage” last month also applies to its current offering, ‘Disgraced’ by Ayad Akhtar. The two plays are astonishingly similar in setup, in structure, and even share a few of the same tropes about first world problems. But if the surface of “Disgraced” feels like a reprise, that impression doesn’t last long. Akhtar’s script dabbles just enough in the banality of Reza’s version of the overwrought bourgeoisie, then heads straight for the jugular.

In this story, we meet Emily (Laura Malkus) and Amir Kapoor, née Abdullah (Nathan Suberi). She’s a young, white painter, and an Islamophile. Her husband is a fast-talking associate in a law firm whose letterhead consists exclusively of “…berg’s and “…stein’s. Amir is doing well at the firm, smoothly assimilating and racking up brownie points among the partners. Emily is practically evangelical about the importance of Islam’s contributions to civilization throughout history, and as the curtain rises we see Amir posing while Emily paints him in a copy of Diego Velázquez’s portrait of Juan de Pareja. The brown-skinned de Pareja was enslaved by Velázquez, and if Amir feels that the situation is problematic, Emily is quick to offer naïve reassurance of her intentions.

Abe Jensen, née Hussein (Danny Sheikh) interrupts the scene, to ask Amir for help. The imam of Abe’s mosque is in jail, accused of raising money for terrorists. The imam already has legal representation, but Abe wants his uncle on the case as “one of his own.” Amir, an apostate, refuses but eyebrows are raised at his firm when a passing remark of support gets picked up by the New York Times.

Later, Jory (Rakael Howard) and her husband, Isaac (Mike Byrne) are dinner guests of the Kapoors. Jory is a colleague of Amir’s, while Isaac is a gallerist who’s mounting a show in which he intends to feature Emily’s work. Isaac and Emily share a secret, and Jory has one of her own—bad news from the office for Amir. The four argue, posture, patronize, and parry. Isaac, a Jew, gives Amir the third degree about Al Qaeda and 9/11, eventually calling him a “closet jihadist.” Jory, a Black woman, breaks the news to Amir that she’s been promoted over him, who fires back at her: “Do you think you’re the n___? I’m the n___” after Emily and Isaac are discovered in flagrante.  From there, things get even uglier.

Director Matthew Sean Mitchell and his cast have an awful lot to unpack with this play, and an enormous amount of emotional capital with which to work. He, and they, do such a great job with it all that it’s only in hindsight when one realizes how easy it might have been to muck up the whole thing. Akhtar’s material is incendiary, yet ethically complex and even subtle in a lot of ways. Ultimately, none of these characters is the result of a familiar storytelling formula. Each of them—even Abe, who doesn’t get a ton of stage time—has surprising and novel elements to exploit. Under Mitchell’s guidance, these five actors deliver a powerhouse ensemble performance.

Suberi’s work is great to watch. Early on, he gives Amir a sense of ease—of comfort in his own skin— that seems completely natural to the actor until Amir has to pivot to hate and violence. At that point, Suberi’s countenance is another thing entirely. The role demands that Suberi do and say some very troubling things, and he takes the audience along. First he earns our sympathy, then he destroys it.

Malkus serves up another bundle of contradictions as Emily. Never once accused of cultural appropriation (the 2012 play probably predates popular use of the term), Emily is berated for her naiveté and lack of irony. Malkus gives her depth and nuance that won’t settle for mere earnestness.

As the gallerist Isaac, Byrne just oozes pompous pretention, and does it in some really delightful ways (his subtle over-enunciation of the word “renaissance” is squirm-inducing). But like his castmates, he adds more—Byrne brings real humanity to Isaac’s flaws, and even sells a redeeming virtue or two.

Jory is the eye of the storm—the moral center—and Howard gives her very solid footing on that ground. Surrounded on all sides by condescension and self-righteousness, Howard demonstrates an expert sense of how to hold power while projecting quiet. She counters the others’ heat with steadfast cool. Jory is also the beneficiary of most of the playwright’s funny lines, and Howard’s deadpan comic timing is perfect.

Director Mitchell is also the production’s set designer, and the apartment is something right out of a Pottery Barn catalog—all shades of gray (like the script), capped by white crown moulding. Adrienne Cassara’s lighting is stark, unforgiving, and static. Costumes by Laura Buccigrossi (who also assistant directed) fit the characters and their surroundings nicely. The uncredited sound design features some evocative guitar and keyboard noodling between scenes. Stage Manager Leiah Poindexter puts all the pieces together. Fight Choreography by Larry Malkus is careful, yet shockingly theatrical. It has to be said that this production includes physical intimacy among some of the characters, and that the producers did not hire an intimacy director or coach. One applauds their choice to engage a fight choreographer in the interest of actor safety, and hopes that they will consider the necessity of intimacy direction in the future, for the same reason.

Kudos to the Vagabonds team for the inclusion of a “Continue the Conversation” card in the printed show program. In light of the volatile topics raised by the play, this card offers a variety of online resources, complete with scannable QR codes.

“Disgraced” runs through April 24, 2022 at Vagabond Players, 806 S Broadway, Baltimore, MD 21231. Tickets are available for purchase online. Patrons are required to provide proof of vaccination and must remain masked.