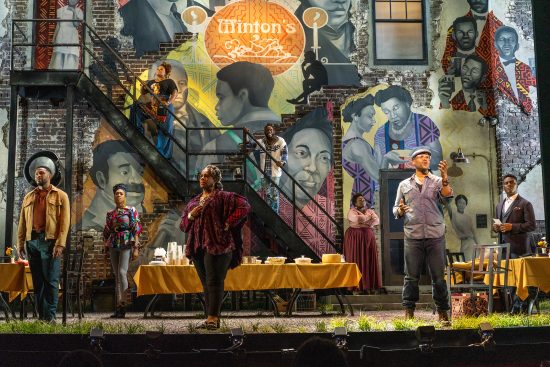 Families are complicated and we all know that. Nolan Williams, Jr., composer, lyricist, and co-writer of the new musical, “Grace,”now playing at Ford’s Theatre, clearly knows that. This world-premiere chronicles a day in the life of a fictional family, the Mintons, as they come together to mourn the loss of their beloved Gran’me and prepare for a memorial at the family restaurant in Philadelphia. The music and book, while they are full of heart and soul, are both uneven and in need of tweaking—but there are moments where content allows these talented performers to soar.

One of those moments, the opening number, “By Grace,” repeated one line that resonated with me: “We only come together when someone weds and someone dies/we’re reminded what it means to have our family in our life.” But what does it mean to have family in our lives? The lyrics would imply that the answer is all good, but anyone who’s had even the slightest hint of familial drama knows that’s not always the case.

Despite being a tale as old as time, ‘Grace’ has its merits, not to mention a powerhouse of talent on the stage.

Thematically, “Grace” (directed and choreographed by Robert Barry Fleming) is similar to “Chicken and Biscuits,” a Broadway play that opened last year (and subsequently closed) about a Black family coming together to mourn a recently-lost loved one and all the family baggage that comes along with it. Like “Grace,” I enjoyed “Chicken and Biscuits” while also recognizing its shortcomings. Productions rehash old themes all the time, but they run the risk of falling into stereotypes—the wise matriarch (in “Grace,” this was Miss Minnie, played by Virginia Ann Woodruff); the once-confident woman trying to keep it all together (Ruth, played by the exceptional Nova Y. Patton); and the young cousin obsessed with social media (Joshua, played by Jarran Muse). “Grace” (and “Chicken and Biscuits”) struggles with this in its characters.

The music and lyrics by Williams, who also co-wrote the book with Nikkole Salter, offer so much at some points, but not all. “Again?”—performed by Ruthie who’s now the proprietor of the family restaurant that’s about to go under—received a mid-show standing ovation and deservedly so. Another fabulous moment occurred during “The Gospel Bird (This Chicken Died),” an entertaining romp that served as a celebration of the humble chicken wing, led by Haley (Arica Jackson), with support from the rest of the Mintons (David Hughey, Raquel Jennings, Rayshun LaMarr, Solomon Parker III, as well as those noted above). But the final number, “The Eulogy: When Gran’Me Cooked,” though tender, fell flat, especially compared the soaring opening number.

Along with examining family dynamics as well as the very real issue of gentrification, “Grace” is also a celebration of food. There’s a good chance you’ll leave the show hungry for fried chicken, black-eyed peas, and other classic dishes. But certain plot points, such as cousin Haley’s name being left off a plaque on the building, have no satisfying resolution (I kept waiting for some big reveal that never came). When the characters begin to break the fourth wall near the end of the show, I am pulled out of Philadelphia and find myself abruptly back in Washington, D.C.

Despite being a tale as old as time, “Grace” has its merits, not to mention a powerhouse of talent on the stage. Although it clocks in at just over 90 minutes, a little bit of tightening and tweaking could make it a powerhouse of a show.