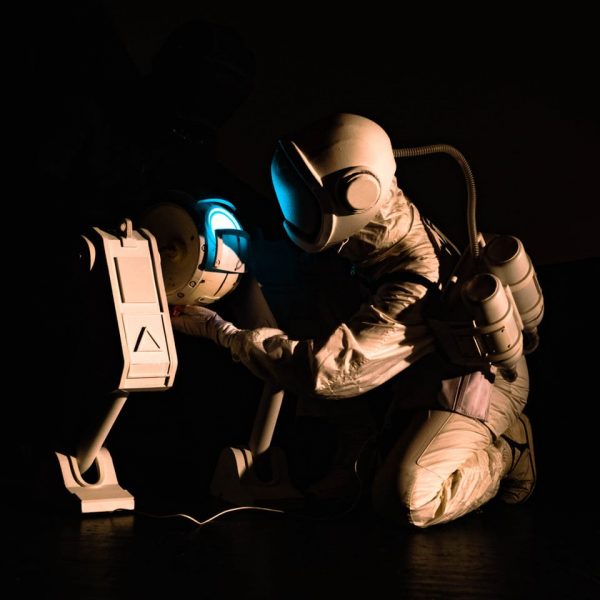 Takoma Park–based Alex and Olmsted is a puppet theater company also specializing in film work. Two years ago they received a grant from the Jim Henson Foundation (their second) for development of “Marooned! A Space Comedy.” Devised and performed by the duo, this lovely piece is appearing at Baltimore Theatre Project through May 8, 2022.

Alex and Olmsted have devised a beautiful piece of theater here, and it closes soon.

“Marooned!” consists almost entirely of live pantomime performance by Sarah Olmsted Thomas with marionette and shadow puppet work by Alex Vernon. There are also a few bits and pieces of recorded content, including an achingly beautiful section voiced by Sylvia Vernon who, one would guess, is somewhere in the range of three to five years old. The setup is ingenious and inventive with what seem to be deliberately low-tech execution of some very ambitious production ideas. The all-black Theatre Project stage is sparsely outfitted with a round white scrim which is used for rear projection via a 20th century vintage overhead projector. A single large disco ball is flown to scatter sparkles of twinkling stars all about the space. The puppets are captivating in their design simplicity and impressive in their use. The costumes seem right out of a George Lucas movie. In fact, everything about the production feels perfectly integrated, and the storytelling is personal, enchanting, and rich.

Thomas plays an astronaut who’s been launched 87,000 light years into space. Her ship crash-lands on an uncharted planet, and she must resort to emergency measures to seek rescue. She assembles a help-mate anthropomorphic robot whose bond with her is half R2D2, half Wilson from “Cast Away.” Bad things happen—life support runs low and all hope seems lost. Finally, a one-in-a-million gambit results in possible salvation thanks to help from the Great Cosmic Peanut, the character voiced by young Sylvia Vernon. There’s help, too, thanks to audience participation that’s prompted by projections, to joyous effect.

This show is tremendously polished. Everything fits. Thomas’ performance is all movement (even her face is hidden by a space helmet) and the work is awe-inspiring. Her simulation of semi-weightlessness is wonderfully choreographed and expertly executed. Vernon is in all black and performs the puppet work and projections. He also appears as characters from time to time, from a robot-eating space monster to a variety of harried help desk attendants.

One can easily imagine a gorgeous film adaptation of “Marooned!” but one also thinks that much of its allure and its magic are in the live experience. Alex and Olmsted have devised a beautiful piece of theater here, and it closes soon.

Advisories: Suitable for all ages.

“Marooned!” runs through May 8, 2022 at Theatre Project, 45 W. Preston Street, Baltimore, MD 21201. Tickets are available for purchase online. Patrons are required to provide proof of vaccination and must remain masked.