Theatre Review: ‘Noises Off’ at the Newtowne Players 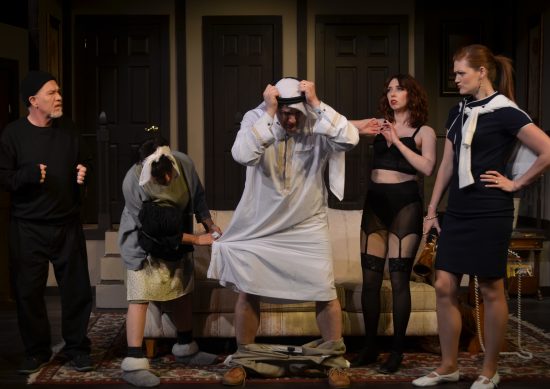 The magic of live theatre is in its ability to create an impenetrable illusion of a story that allows the audience to suspend disbelief for a couple of hours. What could possibly best that feat? The answer is a play that depicts precisely what happens when a theatre company cannot maintain that illusion for their audience. The Newtowne Players’ (NTP) production of “Noises Off” brings this wonderful play-within-a-play to life in a delightfully intimate setting that feels welcomingly immersive.

“Noises Off,” originally written in 1982 by English playwright Michael Frayn, tells the story of a traveling theatre company presenting a sex farce entitled “Nothing On.” Throughout the years, “Noises Off” has been seen in the West End, Broadway, Australia, and everywhere in between. The play is separated into three acts, each act showing a separate part of their increasingly hysterical journey filled with countless mishaps. Along the way, we meet a group of incredibly eccentric characters with convoluted personal lives that hilariously bleed into their professional lives.

Chris Maulden’s set design for this production is magnificent in its transformations. Act One is the technical rehearsal for “Nothing On” and its set is a simple living room in a country home on two levels, with typical fixtures such as a couch, a phone, and tables. For Act Two, the entire set rotates, revealing the backstage of the set during one of the theatre company’s performances. Maulden utilizes every inch, which is especially evident during Act Two when the sides of backstage can be seen by the audience. This makes the second act feel especially immersive since you feel like you are peeking in on an actual theatre company.

The entire ensemble worked together like an unflinching, adaptive machine that never even stops to take a breath, regardless of the shenanigans that occur. By the time Act Three arrives, chaos has ensued at a performance near the end of the “Nothing On” run and the dedication of the cast to the source material was wonderful to watch.

The actors who stood out were Michael Jones as Selsdon/Burglar, Neil Compton as Frederick/Philip, and Sarah Pollard as Brooke/Vicki. Jones has an excellent and interesting vocal cadence. His comedic timing is stellar and akin to watching my own quirky grandfather perform live theatre (and I mean that as a compliment). Creating a pitiful naivety and sweetness to his clueless character, Compton is endearing. The perfectly-timed nose bleeds were extremely funny. Pollard brings her “A” game as a young, self-centric actress who is doing her best to soldier on through the shambles of an imploding production. Her talent is so impressive that I found myself watching her reactions even during scenes when she wasn’t speaking because of how interesting and nuanced her character choices were.

Randy Tusing’s direction keeps the action clicking at a brisk pace that rarely stalls and always feels authentic. This was particularly evident during Act Two when all of the backstage antics were going on during a performance of “Nothing On.” All of the moving parts around the stage were choreographed with the expert precision. Tusing made Act Two feel like we were actually sitting backstage during a show. In Act Three, the cast completely blurs the lines of reality. Certain accidents on stage felt real thanks to the nimble cast and careful blocking by the director.

“Noises Off” is both a love letter to anyone who has has ever participated in a play and in need of a healthy dose of nostalgia AND a shameless farce that will have anyone laughing who loves slapstick humor. This is the perfect show to enjoy the healing feeling of unadulterated laughter.