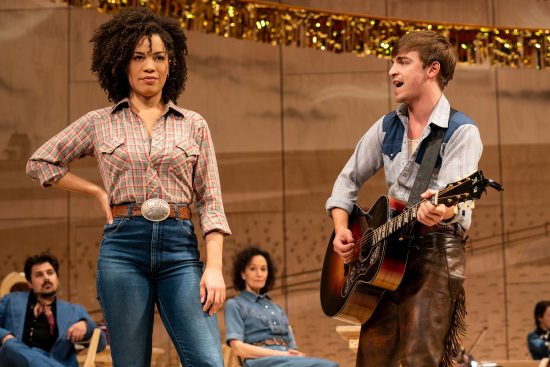 The Bard Summerscape Production of “OKLAHOMA!” by Richard Rogers and Oscar Hammerstein is currently playing at the Kennedy Center. This is the re-imagined version by “visionary director, Daniel Fish” and has a more updated point of view of the musical. The script and the lyrics remain the same, but you will notice a definite change of focus from the set to the actors in the cast.

The audience is made to feel part of the set by leaving audience lights on and there is some mingling with the actors. The feel of the whole theatre is more rural than downtown Washington, DC.  Don’t be shocked by the gun racks on the walls.

This revival of “OKLAHOMA!” is up-to-date and made relevant even after over 75 years.

Even back in 1943, the musical was supposed to highlight the unifying of the vastly different sections of the country. The country, itself, having been forcibly united by World War II. One should remember that when “OKLAHOMA!” opened it was less than 100 years from the end of the Civil War.

There are several instances of gun violence in the show. For every gun visible in the any production, “OKLAHOMA!” will make a donation to Gun Neutral, a non-profit and non-partisan initiative.

The famous Agnes de Mille’s “Dream Ballet” is strikingly and differently choreographed by John Heginbotham. The costuming by Terese Wadden also is modern. The cast wears jeans and shorts with t-shirts are worn—not the 1906 clothing that Oklahomans would have worn when they became a state.

If you are taken aback by the changes remember that Rogers & Hammerstein based their first collaboration on the unsuccessful 1931 play “Green Grow the Lilacs,” a little darker and cornier than the famous musical. “OKALHOMA!” was a huge success, and the first of many for Rogers & Hammerstein. It won the Pulitzer and Theatre World Award in the 1940s and a special Tony on it’s 50th Anniversary in 1993. This 2019 version also won the Tony for Best Revival of a Musical and Best Performance by a Featured Actress in a Musical.

Oklahoma in 1904 was trying to become the 48th state. This is Oklahoma before the Tulsa Massacre and after the end of slavery. The biggest issue was friction between the farmers and the cowboys/ranchers. Laurey Williams (Sasha Hutchings) is a beautiful young girl and both Curly McLain (Sean Grandillo) and Jud Fry (Christopher Bannow) are vying for her affections. Laurey is mentored by her Aunt Eller (Barbara Walsh) with whom she lives. Also in a budding relationship is Ado Annie (Sis), a bit of a flirt, and Will Parker (Hennessey Winkler), a little more worldly after his visit to Kansas City. Annie also is having a bit of a fling with a traveling peddler, Ali Hakim (Benj Mirman). All this will lead to confrontations at the big dance between Laurey’s and Annie’s suitors and the farmers and cowhands.  Add to this, a magic elixir, and you have the basic plot.

The music is some of the most memorable in American show music. “Oh What a Beautiful Mornin,” “Oklahoma” and “People will Say We’re in Love” are probably the most famous. I am particularly fond of “Kansas City” and “Surrey with the Fringe on Top.” All of these are show stoppers, along with “I Can’t Say No.”

If you have seen the musical or the movie, it may take a few scenes for you to get used to this version.  The music with a few exceptions, is modern country music, think Tim McGraw or Kelly Clarkson in style. From the opening of “Oh What a Beautiful Mornin” to the last “Oklahoma” there is no real feeling of a big, Broadway production number. The closest to that is “The Farmer and the Cowman”’ which is done like a more modern square dance, but still has all the performers dancing.

When you see any theatre, you have to leave reality at the door. This is true for this production but in a different way. The set by Laura Jellinek appears to be one large recreation center with simple wood tables and folding chairs. The background is a stark wall with just two farmhouses drawn on it. There are some tinsel fringes hanging from the ceiling, like you would see at a New Years’ Party, with color lights on one wall, and the gun racks.

The lighting spills into the audience, and there are scenes that go totally to black for several minutes.  Scott Zielinski (Lighting Designer) also changes to color lighting for some of the scenes, and often the actors are barely silhouettes.

The costumes are also anachronistic. Some are quite 21st century while others seem closer to the 1950s. Even the props are modern—for instance electric crock pots and Igloo coolers.

The biggest surprise is the cast. Curly’s hair is not curly and Laurey is not a blond, even though some of the music and lines still mention that. Ado Annie is played by an actor who is trans and is much larger than Annie’s beaus. Ali Hakem does not have an accent even though the character is from Persia.

The show is directed as if it was a concert. Some of the lines are said with little expression, intentionally. It is as if someone was directing the show from a rec hall somewhere in Oklahoma. The one thing all this does is make the last scene even more powerful. (I won’t give it away.) It’s like reality somehow crept into this little show as gun violence in our country has a way of appearing out of nowhere to shock us, and then we just go on and continue as before.

The cast may not be traditional but are remarkable. Interracial partnering was not legal in Oklahoma until the 1970s but it works here. I enjoyed the performances, especially Ado Annie because of the actor’s talent. Sis belts out “I Can’t Say No” more like a R&B diva than an Oklahoma gal and it was wonderful.

Hutchings’ Laurey shows the character as sometimes less than sweet which is refreshing. She also can belt out a song. Curly, as played by Grandillo, is not as macho as his predecessors. The character does many of his numbers strumming a guitar. Both Grandillo and Hutchings connect well in the number “People Will Say We’re in Love.”

Winkler, who may be the best dancer of the cast, is just perfect as Will Parker as he sings “Kansas City.” Hammerstein’s book gives some of the funniest lines to Annie, Will, and Ali Hakim. The three performers all made these moments work. Bannow’s Jud Fry is a pathetic, lonely person. At times his performance is chilling. He makes Jud just downright scary, like an undiscovered serial killer or mass murderer as he sings “Lonely Room.”

Walsh as Aunt Eller and Mirman as Hakim both bring magic to their roles as well. Gabrielle Hamilton plays Laurey during the famous dance scene. She is an extremely talented dancer and the “Dream Ballet” is set to heavy metal music with some Hawaiian-style, steel guitar sounds. The dance itself is part ballet, part a gymnastic floor exercise, and part exotic dancer.

The rest of the cast which includes Ugo Chukwu as Cord Elam, Hannah Solow as Gertie Cummings, Mitch Tebo as Andrew Carnes, and Patrick Clanton as Mike provide a solid base for the other performers.

I applaud Fish for this experiment. It opens this genre to a whole new audience. I may not agree with some of his choices, but I respect him for making theatre more flexible. The same is true with Daniel Kluger’s orchestrations and arrangements. It may not be everyone’s preferred style, but it works in the context of this version of “OKLAHOMA!” The orchestra under Andy Collopy helps Fish create this vision as well.

This revival of “OKLAHOMA!” is up-to-date and made relevant even after over 75 years. It will leave you wondering whether that beautiful morning is real or just an illusion.

Advisory: Recommended for children ages 12 and up and contains fog, loud gunshot effects, moments of total darkness and violence.