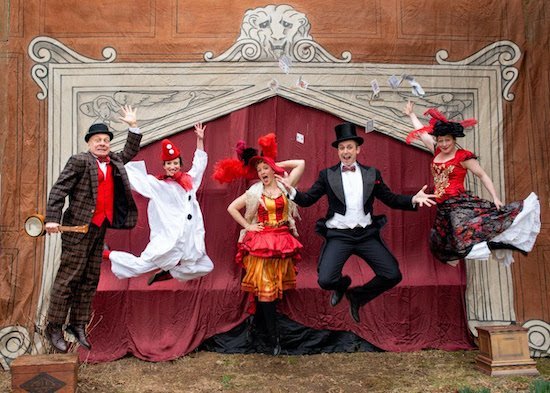 Choo choo! A train whistle sounds as five pantomiming performers chug onto a simple set. The dulcet harmonies sung to the audience invite us on a journey to revel in the magic—quite literally at times— that is classic American Vaudeville. “Before radio, film, TV and the new media, Vaudeville was the popular American entertainment, flourishing from about 1890 until around 1930, when it finally succumbed to radio and film. It featured a wide variety of acts, which toured nationwide circuits, often by train” says Sabrina Mandell and Mark Jaster in their artistic notes. Indeed, Baltimore has been visited by an incredible glimpse of the past. “Pocket Moxie” at Baltimore Theatre Project transported me to a time of song, dance, puppets, slapstick, and enough corny jokes to make my head pop.

…a true celebration of character, comedy, and the beautiful creation of storytelling.

The Happenstance ensemble’s reimagined Vaudeville took all of the best tricks of the trade and thankfully left the more troubling accouterments to the annals of history. While an interrogation into racist theatre practices is much needed, I found it appropriate that this production refreshed a form that has merit but is in need of better punchlines. This was by choice, according to the artistic notes, “Vaudeville’s rich history cannot be explored without encountering some deeply unsettling cultural stereotypes, especially in the use of blackface by both white and black performers. This legacy of the minstrel shows and that of other ethnic caricatures is a problematic part of America’s theatre history. Exploring these issues is not our mission. We have chosen instead, to re-imagine old Vaudeville, capturing the energetic spirit of its many performers and its style.” Vaudeville was known for its variety acts and with such a rich tapestry of performance, “Pocket Moxie” leaned into that variety tactfully, keeping the audience laughing with them and not at them. The evening was a true celebration of character, comedy, and the beautiful creation of storytelling.

The ensemble was comprised of five highly skilled and immensely funny performers that included Mark Jaster, Sabrina Mandell, Sarah Olmstead Thomas, Alex Vernon, and Gwen Grastorf. The expert physical technique and gorgeous singing were only enhanced by the ensemble’s ability to engage with the audience directly during performance. It was evident that this troupe has a dynamic repartee, listening and supporting each other all while making space for each individual to shine.

Lighting design by Tori Muñoz was effective. The side lighting and era-appropriate floor cans gave a soft, warm, and vintage-toned mood throughout the piece. Subtle shifts helped guide the audience’s attention to the scene at hand, and altered the mood when necessary for the more melancholic or sultry acts. Costume design by Mandell immediately evoked the fashion of the early 20th century with elegant flair. Jaster and Mandell’s set design was stripped back, with the main focal point a twin pair of painted wooden dividers, just enough to protect an actor during a costume change but allowing for maximum playing space. The only other fixed area was for the live foley being performed, where each ensemble member diligently supported another with well-timed honks, sliding whistles, and the old classic “ba dum tsss” on the drums. There was even an auxiliary character, that of “Mr. Manager,” who was only ever heard as a duck call and with whom the players engaged to great comedic effect.

The acts devised by the ensemble were truly timeless and evocative of the Vaudevillian zeitgeist, making me feel like I knew what would come next and then surprising me into a fit of giggles. Comedy comes from a sense of failure, a misstep on the part of a character. There were failures galore, but the gallant characters held fast to their moxie and persisted, played truthfully and with panache. Grastorf acquitted herself well as a yodeling goat-herd, doomed to be pulled off stage by a comically large Shepard’s crook. The characters, Mr. Short and Mr. Wisenheimer, made several appearances with their wise-cracking jokes, as did the charming and hilarious “commercials” for such items as “Walla Walla Water Wear” and “Pablum Patty’s.”

The use of props throughout the piece was expertly handled by all. I was particularly enthralled by Jaster’s use of a cane, a chair, and a saw during one vignette. A true master at work, he constantly subverted expectations and found clever, if not circuitous, methods to solve his own self-made obstacles which delighted all in attendance.

Special consideration must also be given to the stunning puppetry. Humanette Dolls, created by Nancy Mendez, were hysterically performed by Thomas and Grastorf in the number, “Baby Sister Blues,” sending little hands and shoes a-whirl with classic choreography. Mandell’s maneuvering of a cat puppet in “The P***y Cat Rag” had me believing that there was, in fact, a cat on stage. Pierrot, crafted and handled by Vernon (with scene partner Thomas) in “Harvest Moon,” brought a moment of such sweet and mournful beauty, showcasing the tenderness of love, that it caught my breath and flew away with it like Pierrot and the moon.

I am unsure if it was due to the decidedly small audience, or perhaps an off-night, but I was left wishing for the energy of the evening to be turned up a notch or two. While the pacing of the physical comedy and facial expressions were on point, the actors were not mic’ed and I struggled at times to feel the freneticism and grandiosity I associate with this style of performance. Some of the transitions between vignettes could have been sharper, but overall none of this detracted from my experience or in my enjoyment of the material.

The finale “Restaurante Italialano” was my favorite vignette of the evening. Throughout the evening’s performance, every new character was established quickly and clearly through physicality and voice—the finale being no exception. In this particular scene, the high powered chef, played by Mandell, is fastidiously preparing a meal and expects the two waiters (Grastorf and Vernon) to set the table appropriately. From the first moment, the power dynamics between the three characters is clear. As the stakes rise and the tension build, the game becomes evident. Twirling plates, juggling, and a tablecloth that just isn’t in the right place had me laughing so hard, it brought me to tears. Vernon’s character turns every stage of setting the table into a game, and Grastorf (not to be outdone) tries to one-up him resulting in an eventual mess of “meatballs” and table-wear all over the stage. A spectacular finish I will not soon forget, buttoned by a rousing chorus of “O sole mio”—or should we say-meatball!

This production celebrates theatre in every detail. As the pantomime train that ferried us into the evening departed, I couldn’t help but to reflect on what a show like this means for audiences today. More often than not, we ask ourselves as artists, why this play? What does it say about our world? But I challenge that notion with another. That theatre can simply be meant to entertain. Before Netflix and HBO, movies and television, and before radio, there was Vaudeville. The variety act meant to delight and provided reprieve from the acerbity of life. “Pocket Moxie” breathes back that life onto the stage. It subscribes to Dandy Wellington’s “Vintage Style, Not Vintage Values” methodology in its irreverent and whimsical interpretation of Vaudevillian techniques and characters. This is precisely what we need as audiences and artists step back into the theatre together—to laugh, to be entertained, and to share in the joy of being apart of something ephemeral. That, and to put a little bit of moxie in our pockets.

“Pocket Moxie: A Happenstance Vaudeville” runs through April 3, 2022 at The Baltimore Theatre Project, 45 West Preston Street, Baltimore, MD 21201. Tickets and information can be found here or by calling the box office 410-752-8558.