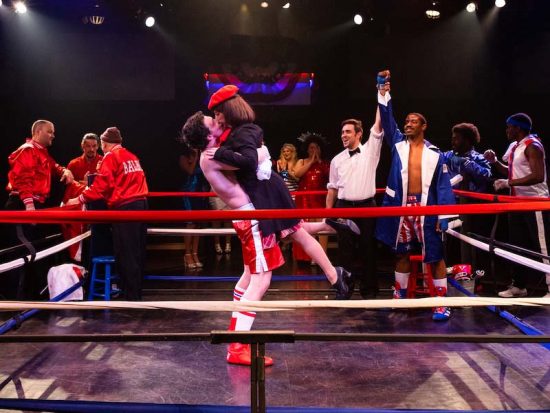 In 2014, I attended the Broadway opening of the musical adaptation of “Rocky” based on Sylvester Stallone’s 1976 film—the sleeper hit that won the Best Film Oscar and catapulted Stallone into superstardom. At the the time, I also had the opportunity to interview the star, Andy Karl, before all the other big outlets had their chance. A fellow Maryland native, he is also one of the most talented and generous actors on Broadway. Coincidentally, Howard County native, Margot Seibert, made her Broadway debut and originated the role of Adrian.

…more down-to-earth and truer to the spirit of the original film—thanks to designer David A. Hopkins and the direction of Toby Orenstein and Mark Minnick—and maybe something the Broadway show should have considered…it’s truly a knockout.

With all these connections, it could be said that “Rocky” has come home to Toby’s. For over 40 years, this theatre has become an invaluable training ground for many successful performers thanks to the vision of Toby Orenstein. She also started Columbia Center of Theatrical Arts (CCTA), a school for young people interested in the performing arts. Seibert was a Young Columbian as a student at CCTA  and both she and Andy Karl performed at Toby’s Dinner Theater when they were coming up as actors. Though “Rocky” had mixed reviews and a short run, Karl received a well-deserved Tony nomination.

The concept of Toby’s is interesting and creates a sense of family. Toby veteran Robert Biederman, who plays a wonderful Mickey, introduced the show and also celebrated any birthdays in the audience. (We also found out that the name of Rocky’s pet turtles is different than in the film). Though the meals are served buffet style, many of the actors are also the waiters before the show and during intermission. Performing in a show comes with its own challenges and anxieties in itself so the philosophy seems to be if these actors can handle both roles (and many do, just not at the same time) with grace and poise (which they do), they are prepared for anything that the acting profession throws at them. Our server was Justin Calhoun who is not only the Rocky understudy and plays several parts, but he does a brilliant job as the fight choreographer. He utilizes the slow-motion techniques from the original production for the big punches (with the help of the clever lighting and strobe effects of lighting designer, Lynn Joslin), and works the tight fight scenes realistically without anyone really get hurt. (Fight training was provided by the local Title Boxing Club.)

One of the issues with the Broadway production seemed to be too much emphasis on the large, overpowering sets and big multi-media effects. The show also offered a “wow” factor for those audiences members (as well as the rest of the audience) who purchased a golden ticket. Before the big fight scene, they were escorted to the stage to stand in as the fans in the bleachers (the only time many of us would be in show on a Broadway!) The boxing ring then slowly moved out over those front row orchestra seats. If nothing else, the fight scene won the critics over.

In contrast, the more intimate, theater-in-the-round that Toby’s offers seems better suited to this show as the entire audience is already part of the action. The sets are simple and real, created by pieces brought in for each scene. Just as the plot is a Cinderella story, so was the making of the movie, with its small budget and unknown actor/writer. Elements of this production seems more down-to-earth and truer to the spirit of the original film—thanks to designer David A. Hopkins and the direction of Toby Orenstein and Mark Minnick—and maybe something the Broadway show should have considered.

The musical was adapted by Stallone from his original script, with Broadway veteran Thomas Meehan  who wrote “Hairspray” and “The Producers.” The original score was written by Tony Award-winners Stephen Flaherty and Lynn Ahrens (“Ragtime”), with some familiar songs taken from the Rocky films, including Bill Conti’s iconic theme, “Gonna Fly Now,” and “Eye of the Tiger” which became a hit for the 80s rock group, Survivor. They are probably the most memorable songs in a competent score. Though you can’t see them, the orchestra did a fantastic job under the direction of Ross Scott Rawlings.

Both of the young leads are making their Toby’s debut and prove they have great future in theatre ahead of them. Tall and handsome, Howard County native, Patrick Gover, is the whole package. He captures Rocky’s niavité, tenderness, humor, and strength while avoiding the trap of caricature and imitation. He also has a great voice.

To get by, Rocky works for a loan shark, Mr. Gazzo (Shawn Kettering), but he never beats anybody up. He is also trying to court his grade school crush, Adrian, who works at a pet store. She is played by Lydia Gifford who also has an incredible voice and perfectly embodies the painfully shy and mousey sister of Rocky’s friend, Paulie, (a spot-on performance by Adam Grabau), a drunk and a bully. Gover and Gifford are a perfect match, physically and vocally (“Happiness”) and Adrian blossoms and comes into her own.

Rocky may not be the brightest bulb but he is without guile and has a sense of pride. A failed boxer from South Philly, he is plucked out of obscurity by world heavyweight champion, Apollo Creed, played with great style and swagger by Gerald Jordan (former CCTA instructor and currently its Deputy Director of Operations and Programming; read his interview here), when his opponent is injured. Not only a great boxer, he is a brilliant salesman—Apollo thinks Rocky’s nickname, the “Italian Stallion,” is a PR match made in heaven for America’s Bicentennial-day bout.

Another standout is Janine Sunday as Paulie’s girlfriend (also Adrian’s boss and friend), Gloria, another incredible voice who also brings a lot of humor to her role. (She also nails the 70s perfectly as the costume designer.) In fact, everyone gives a great performance with beautiful vocals so don’t miss this show—it’s truly a knockout.