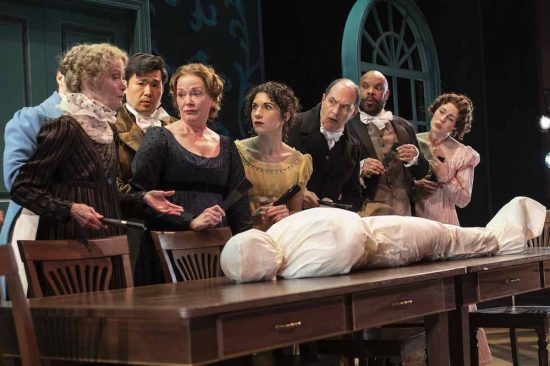 The Company of “Sense and Sensibility.” Photo by Teresa Castracane.

Jane Austen is one of Britain’s most beloved writers on both sides of the pond thanks, in part, to A&E which first offered the fan-favorite 1995 “Pride and Prejudice” with Colin Firth and Jennifer Ehle. But it was PBS’ Masterpiece that ran the complete Jane Austen series (produced by England’s ITV). Austen’s unfinished “Sanditon” is currently in its second season on PBS. Though she wrote only six complete novels, there always seems to be a new film version of one of Austen’s books, most recently the 2020 “Emma” with Anya Taylor-Joy.

…a good dose of humor, physical comedy, and loads of fun without losing its poignancy when appropriate.

Also in 1995, Emma Thompson starred and won an Oscar for her adaptation of “Sense and Sensibility.” While true to the material, Everyman Theatre is currently offering a completely different twist on this novel thanks to Kate Hamill’s adaptation and director Susanna Gellert. This version comes with a good dose of humor, physical comedy, and loads of fun without losing its poignancy when appropriate. With a small cast playing multiple roles (including animals), the pace is very quick (for the most part) and downright hilarious, especially when two characters played by the same actor are in the same scene. There’s even a puppet but that’s giving too much away. Mrs. Jennings’ daughter is played by three different actors (two women and a man) in different scenes (as indicated by the addition of red and black hair accessory and a large handkerchief) and it gets funnier each time. Mrs. Jennings is a hoot.

Before the show begins, the actors (in regency splendor from costume designer David Burdick and wig designer Denise O’Brien) appear in the audience, chatting up its members (masked of course). Contemporary music is also being played. The fourth wall has been broken and you know you are in for something unexpected.

All the Austen themes are here. Women cannot own or inherit property of their own and their fortunes and happiness are based on how well they marry. Men must adhere to expectations if they are in a certain class or risk disinheritance and financial ruin. A dalliance out of wedlock for a woman is social death or worse (but of course, not for the men). There are misunderstandings, secrets, hearts are broken and healed. In the end, true love, conveniently coupled with good fortune, wins the day.

I have a great fondness for the talents of Everyman’s Resident Company because they never fail to give a wonderful performance. In this production, we have Bruce Randolph Nelson as John Middleton, Deborah Hazlett as Mrs. Dashwood, Jefferson A. Russell as Col. Brandon, Helen Hedman as Mrs. Jennings, Hannah Kelly as Margaret Dashwood, and Tony Nam as Edward Ferrars. Two excellent DC actors, Zack Powell as John Willoughby and Tuyet Thi Pham as Fanny Dashwood, round out the cast. It feels like being entertained by old friends after the difficulties of the past couple of years. They are all a treasure and delight to watch.

The two Dashwood sisters are at the center of the story. Their lives are drastically changed, and not for the better, after the death of their father. Resident Company member, Megan Anderson plays the protective eldest sister, Elinor (the “sense”), who buries her deep emotions and secrets. Fellow RC member, Katie Kleiger, is the wears-her-heart-on-her-sleeve Marianne (the “sensibility”), throwing herself headlong into life. By the end, Marianne gains some sense and Elinor’s emotions can no longer be held back—all for the good.

Fun aside, there are some particularly wonderful serious moments. A surprising one comes from Zack Powell as the cad, Willoughby, when he tries to see Marianne who is ill. He thwarted by Elinor and his scene with her is probably the best interpretation I have seen. His pain is palpable and he also manages to evoke sympathy for a despicable character—and that is hard to pull off.

Unlike the detailed and lavish sets of past Everyman productions, this one forces you to use your imagination—clever in its simplicity, it also adds so much to the humor of the play. A beautiful scrim with flourishes hangs in the back. Utilizing a turquoise color throughout, the set also consists of eight chairs, two tables, a large door, and two arched windows with muntins, each with a window seat at the base. This provides a multitude of positioning and configurations—among them a writing desk, a bed, a carriage, and piano forte—mostly done by the actors themselves. Turning the door around several times signified a different house in a different place. The set is very fluid. When actors aren’t performing, you can see them behind the windows, peeking through the panes as observers, with their fans going.

The cast did not use mics and for the most part, it worked. Depending on the position on stage or just the voice itself (and despite wonderful accents and performances by all), a few sounded muffled at times, but not enough to take away from the enjoyment of the production.

If you are looking for a fresh take on a well-loved classic and a joyous evening at the theater, look no further than Everyman’s “Sense and Sensibility.”

“Sense and Sensibility” HAS BEEN EXTENDED through May 8, 2022 at Everyman Theatre, 315 West Fayette Street, Baltimore, MD 21201. For more information and tickets, call the box office at (410) 752.2208 or you can purchase tickets here. Tickets are also available for digital streaming starting on April 22, 2022 and must be purchased by Sunday, May 8, 2022 at 12 pm (It can be viewed on-demand until May 22.) Those who have purchased access will be able to watch the video from April 29.