Theatre Review: ‘We Declare You a Terrorist…’ at Round House Theatre 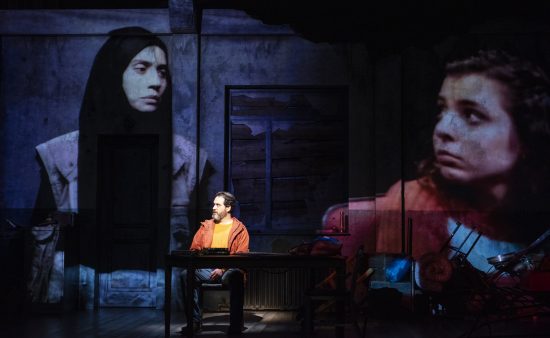 Ava Eisenson, Cody Nickell, and Bekah Zornosa in “We declare you a terrorist…” at Round House Theatre. Photo by Margot Schulman Photography.

In an uncanny coincidence of timing while the world focuses on the Russian invasion of Ukraine, “We Declare You a Terrorist…” at Round House Theatre takes a somber look back on a violent moment in Moscow twenty years ago. In the 2002 Nord-Ost siege, dozens of Chechen terrorists seized a theatre during a sold-out performance of the Russian musical “Nord-Ost”, holding more than 800 people hostage for several days. In the end, at least 170 people were dead. Adapting this tragedy into a play is a challenging and perilous endeavor. “We Declare You a Terrorist…”. by Tim J. Lord, proves a disquieting exploration of radicalization, state manipulation, and empathy.

…a disquieting exploration of radicalization, state manipulation, and empathy…deserves praise for its technical craft and its ambition…

From the buzzing blackness of the show’s first moments, an unease permeates, deepened when two bulbs illuminate the Writer (Cody Nickell), hooded and zip-tied, with sounds of torture echoing from off-stage. The bulky Russian Foreign Security Service (FSB) Officer (Elliot Bales) enters the room, shaking out his fist, and lightly asks, “Are you happy?” This tonal discordance recurs throughout the show, adding some humor and intrigue, but undercutting the gravity of the subject. The Writer, detained trying to enter Chechnya, Russia from the neighboring country of Georgia several years after he was held hostage during a performance of his musical, is understandably not happy.

Why the Ukrainian-born playwright was trying to enter Chechnya is one of the questions the FSB Officer wants answered, suspicious the Kiev-born intellectual has radicalized. But answering requires revisiting the Writer’s experiences during the hostage crisis, particularly the relationships he built in those tense days with the teenage Masha (Bekah Zornosa) seated beside him, and Kayira (Ava Eisenson), one of the militants holding them hostage. Just as the FSB Officer attempts to develop rapport with the Writer to wring out answers, the Writer once tried to empathize with Kayira, hoping to deescalate the crisis. With flashback scenes projected on the walls of the set and theater, the past mingles with the present.

When live dialogue and presumably pre-recorded footage meld seamlessly, the show is at its technical best, a credit to the multimedia designer, Jared Mazzocchi. However, Ryan Rilette and Jared Mezzocchi’s direction of flashback scenes seems distractingly heavy-handed. When close-up footage of the actors allow the audience to see every twitch, stage acting begins to feel like overacting. Here, less would be more.

During the flashbacks, lighting designed by Amith Chandrashaker dims to a spotlight, while the interrogation is brighter under the harsh bare bulb lighting. Late in the show, the house lights rise and for that instant, we seem to become that Moscow theater and the terrible memories it holds.

Contributing to this menacing atmosphere is the appropriately frightful set designed by Lawrence E. Moten III. It threatens violence, with bullet holes punched in the grimy walls of the interrogation room, broken furniture, and a boarded-up window—the only decor beside the steel table and chairs. Combined with the sound design by Matthew M. Nielson, which conjures horrifying off-stage images with screams of pain, buzzes of electricity, piercing gunshots, and the terrible silence that follows, there’s no doubt that to be declared a terrorist in Putin’s Russia is no pleasant fate.

No heroes emerge in Tim J. Lord’s play, only sympathetically cowardly, misguided, and afraid people. Kayira is humanized by her youth; her infant son; the many friends and family she’s lost to the conflict in Chechnya; her harsh attempts at comfort, like her promise not to set off her bomb without orders; or the reassurance that an execution has been postponed until the morning.

The FSB Officer, despite considerable stage time, feels half-formed compared to the other three characters. That’s in part because his scheming manipulations leave everything he says in doubt, but also the fault of an inconsistent script. For example, the FSB Officer moves within seconds from casual violence to earnest surprise and sympathy for the Writer’s marital problems. While these rapid tonal shifts keep the plot clipping along, they strain believability.

“We Declare You a Terrorist…” deserves praise for its technical craft and its ambition, even if the book could use a few revisions for tonal consistency and flow. Although not produced or written as a commentary on today’s conflict, the themes remain unfortunately relevant. As it questions truth, radicalization, and the romanticism of war, “We Declare You a Terrorist…” asks you, in the same circumstance, might you not do the same?

Running time: 100 minutes with no intermission.