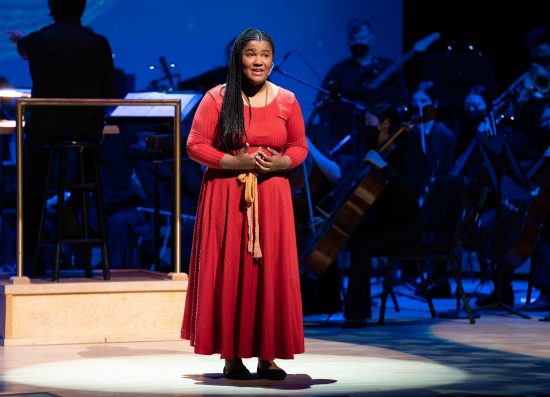 There’s something about kids singing in a grown-up show that captures the attention of young and old alike. These were my thoughts as I watched an amazing performance by the Young Artists of America (YAA) in the Elton John and Tim Rice’s “Aida” at the Music Center at Strathmore.
YAA’s 10th anniversary celebration began with a pre-show peek at the performers backstage, followed by the musical presentation, including a video greeting from English lyricist, Sir Timothy Rice. At the post-show gathering, we wandered past seven previous show posters, placed a bid in the auction (show items, of course), and congratulated arts supporter, Carol Trawik, from the Jim and Carol Trawik Foundation, the recipient of the 2022 YAA Mentorship Award.
“We not only survived but thrived during the pandemic and are thrilled to be back on the stage at the Music Center for the first time since 2019,” YAA co-founders Rolando and Kristofer Sanz noted in the program. Rolando is listed as director of the company, while his brother, Kristofer, raised his baton to lead the orchestra in collaboration with Westlake High School Choruses with Mark Pavlecic, director,

…there was a lot to celebrate, and a live performance of Broadway’s ‘AIDA’ was icing on the cake.

Based on Giuseppe Verdi’s opera, the Elton John-Tim Rice version is a pastiche of Broadway, pop music, and hand-clapping rock ‘n’ roll. Like the recent movie, “West Side Story,” “Aida” is another take on the “Romeo and Juliet” theme of star-crossed lovers. In Shakespeare’s tale, the obstacle is two families at war. In the musical, it is two warring countries, Egypt and Nubia.
As the Nubian-princess-turned-Egyptian-slave, teenager Ella Hinds performed the lead role with passion and clarity. The tale of a princess caught between trying to save her people and her love for an enemy soldier still rings true today. This teen could teach strength and patriotism lessons to our current tragic world—the war in Ukraine and slavery in Mali and other countries. If only we would listen to  words and songs in “Aida.”
Memorable ones include a rousing “The Gods Love Nubia,” which closes the first act and reminds us of that other rallying call from “Les Miserables.” As Radames, Spencer Whims proved to be strong, yet tender, in his love duet, “Written in the Stars.” Christian Blair, a standout as the slave, Mereb, singing his heart out for mercy and recognition in “How I Know You.” And standing perfectly still as Amnneris, Hashini Amarasinghe looked gorgeous in black and gold.
The list goes on and on…kudos to the Nubians, Soldiers, and Ministers, with a special nod to Chalice Hemby for her choreography. Wow! So many kids to move across the stage. The projection design by Dominic Grijalva deserves praise—the stage with pink AIDA across the scrim was beautiful.
Last but certainly not least, praise goes to Kevin S. McAllister, the stage director for this production of “Aida.” Let’s hope this talented singer, actor, director and winner of the Helen Hayes Award for his portrayal of Coalhouse Walker in “Ragtime” has a pipeline to Broadway where he performed in “Come From Away” and “Caroline or Change.” I’ll bet the YAA kids are hoping he returns for another show and some advice on making it big on Broadway.
Perhaps Terry Eberhardt, who oversees the music program at YAA’s summer intensive, summed it up best.“Our show was spectacular…over 160 students on stage with full orchestra and guest choir…we are thrilled to be back to shaping humanity with our quest to make better humans through the performing arts.”
An email from Carole Graham Lehan, the theater pro for the summer kids programs, lovingly adds, “The plot of Aida promotes curiosity about the notion of power over another people. It humanizes the oppressed, and it underscores the idea that love is love is love regardless of ‘tribe.’ In our continuing isolation-recovery, It’s imperative for our kids to have opportunities to connect, collaborate, and tell someone else’s story.”
Running time:  Two hours and 15 minutes with a 20-minute intermission.
“Aida” was a one-time-only performance on April 2, 2022 by the Young Artists of America at the Music Center at Strathmore, 5301 Tuckerman Lane, North Bethesda, MD 20852. For information on all performances and to register for the summer programs, click here.