‘A Quick 5’ with Dénes Várjon, International Pianist, presented by the Candlelight Concert Society 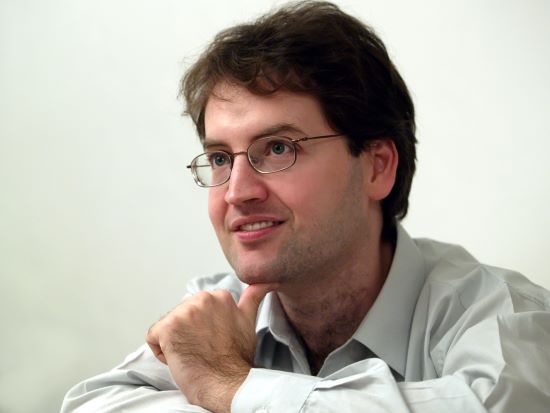 On June 1, 2022, the Candlelight Concert Society will be presenting Dénes Várjon, the “a most exciting and highly regarded pianist on the international stage.”

The program will include Bach’s “Sonata in A Minor,” Schumann’s “Fantasie in C Major,” Mozarts’s “Rondo in D Major,” and Chopin’s “Sonata in B Minor.”

His sensational technique, deep musicality, wide range of interest have made Dénes Várjon one of the most exciting and highly regarded participants of international musical life. He is a universal musician: excellent soloist, first-class chamber musician, artistic leader of festivals, and highly sought–after piano pedagogue.

He also performs frequently with his wife, Izabella Simon, playing four hands and two pianos’ recitals together. In the past decade they organized and led several chamber music festivals, the most recent one being „kamara.hu” at the Franz Liszt Music Academy in Budapest. In recent years Mr. Várjon has built a close cooperation with Alfred Brendel. Their joint Liszt project was presented, among others, in the UK and Italy.

He has recorded for the Naxos, Capriccio and Hungaroton labels with critical acclaim. Teldec released his CD with Sándor Veress’s “Hommage à Paul Klee” (performed with András Schiff, Heinz Holliger and the Budapest Festival Orchestra). His recording “Hommage à Géza Anda”, (PAN-Classics Switzerland) has received very important international echoes. His solo CD with pieces of Berg, Janáček and Liszt was released in 2012 by ECM. In 2015 he recorded the Schumann piano concerto with the WDR Symphonieorchester and Heinz 1 Holliger, and all five Beethoven piano concertos with Concerto Budapest and András Keller.

Dénes Várjon graduated from the Franz Liszt Music Academy in 1991, where his professors included Sándor Falvai, György Kurtág and Ferenc Rados. Parallel to his studies he was regular participant at international master classes with András Schiff. Dénes Várjon won first prize at the Piano Competition of Hungarian Radio, at the Leó Weiner Chamber Music Competition in Budapest and at the Géza Anda Competition in Zurich. He was awarded with the Liszt, the Sándor Veress and the Bartók-Pásztory Prize. In 2020 he received Hungary’s supreme award in culture, the Kossuth Prize. Mr. Várjon works also for Henle’s Urtext Editions.

Can you tell our readers a little bit about yourself?

I am from Hungary and I live in a small village called Csömör with my wife and 11-year-old daughter. This place is very near to Budapest, so it’s very easy for me to go to the city for concerts and teaching, as well as to other programs, while I also enjoy the calmness of a small village.

Do you play any other instruments?

No, unfortunately I don’t play any other instrument. I have some experience with old pianos especially from the time of the romantic composers like Chopin and Schumann.

Which person (living or dead) inspired you to learn the piano?

When I was a small child, my first inspiration was opera. I regularly went to the Opera House in Budapest with my parents and was completely in love with those performances. That is why I decided to be a musician. Later, I met—personally or through their recordings—a lot of musicians who inspired and still inspire me. To name just a few, they include Maria Callas, Carlos Kleiber, Pablo Casals, Sándor Végh, András Schiff, Annie Fischer, Alfred Cortot, Artur Schnabel, and many more.

Of the four composers on the program (Bach, Schumann, Mozart, and Chopin) which do you prefer to perform if you had to choose and why?

It would be extremely difficult to choose one of these four composers. I love them all extremely well. If I had to make a decision, I would choose Robert Schumann who has been very close to my heart since childhood. I am absolutely amazed by his fantasy world which is so full of emotions and expresses the human soul so wonderfully. It is a most wonderful experience for a pianist to play his pieces.

This is a question for the young readers out that who hope to be a classical musician.  How many hours do you practice a week?

I love practicing, so quite a lot. It’s hard to say what would be the average amount of hours per week. Sometimes I play nearly all day and, at times, I hardly have time. It depends on all the other programs as well. Usually, I need at least three to four hours a day to feel satisfied. But, sometimes it’s more and sometimes it’s less, of course.

Dénes Várjon will be performing at the Smith Theatre at Howard Community College, Campus Dr, Columbia, MD 21044 on Wednesday June 1, 2022 at 7.30 p.m. For tickets and more information, click here. For more information about the Candlelight Concert Society and their upcoming concerts, go to their website.