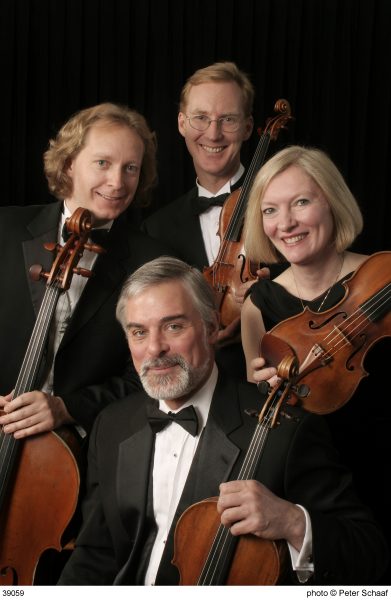 On May 22 Candlelight Concert Society (CCS) presented “American String Quartet with Octavio Vazquez” and the audience was in for a real treat. Even though it was getting stormy outside, the American String Quartet opened with music that brought sounds of spring. The first piece was George Walker’s “Lyric for Strings” with dulcet notes reflected in the lightness of the instruments.

The second selection was Maurice Ravel’s “String Quartet in F Major,” a piece in four movements written when Ravel was a student. The first and third movements show the influence of his teacher, Gabriel Fauré. In contrast, the second movement was less mellow, with a great deal of pizzicato for the strings.  The final movement, “Vif et agité” already showed Ravel’s impressionistic influences. You could hear the streets of Paris in the notes.

…a very moving and memorable work…

After intermission, the most anticipated part of the performance was Octavio Vazquez’s ‘Piano Quintet’ written in 2021 and commissioned by the Aspen Music Festival. (Read Susan Brall’s interview with Octavio Vazquez here.) “The piece relates to the late 15th century events in Galicia and the Iberian Peninsula in general.” The was the time of the Inquisition when Jews, and later Muslims, who had lived in harmony for years with Christians, were suddenly expelled, imprisoned, and murdered. The piece had a great many discordant sections that mirror the plight of these sudden “pariahs.” The notes formed images of sorrow and loss and there was also a hint of Klezmer music which is associated with European Judaism. The first sad sounds were followed by notes that mirrored strife and powerlessness. Finally, the sounds of resignation with tyranny reverberating on the piano. Throughout the Quintet, you might have “heard” the sounds of children, and in several sections, there seemed to be almost a dialogue between the strings and the piano. The “Piano Quintet” was a very moving and memorable work which capped off another wonderful presentation by CCS.

If you missed this wonderful concert, there is still one more this season. Pianist Dénes Várjon, originally scheduled in March, will perform on Wednesday, June 1, 2022 at the Smith Theatre, 7:30 pm.

CCS next season begins Sunday, September 11, 2022 with The Knights Chamber Orchestra. There will be a new piece commissioned to help celebrate Candlelight Concert Society’s 50th Season and also a “Free-For-All Concert” with talented young musicians from all over Howard County. For more information and tickets for the 2022-23 season, please click here.