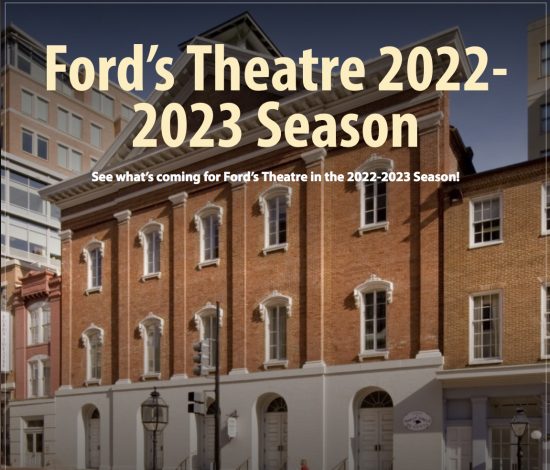 Performances of the Society’s actor-led History on Foot walking tours of downtown Washington, D.C., and daytime one-act play performances of One Destiny also will continue in the spring of 2023.

“This season draws us deep into our American past, amplifying under-told stories and connecting audiences with themes of bravery, perseverance and influence,” said Ford’s Theatre Director Paul R. Tetreault. “We are privileged work with these exceptional storytellers and artists and cannot wait to see these stories come to life on our historic stage.”

Free Preview
Ford’s Theatre is continuing its commitment to offer more than 1,400 free performance tickets to the company’s mainstage productions during the 2022-2023 season. All tickets to a preview performance of The Trip to Bountiful and SHOUT SISTER SHOUT! will be offered free of charge via a ticket lottery, and at least 100 free tickets will be made available for a preview performance of A Christmas Carol. The Free Preview initiative seeks to remove price barriers and build audiences in a more inclusive way, by inviting those who live and work in the Washington community who might not otherwise consider participation in the arts. Since the program launched in 2016, more than 6,500 tickets have been provided to D.C. audiences.

Discounts are available for groups, senior citizens, military personnel and those younger than age 40.

Student Matinees and Teacher Preview Workshops
Ford’s Theatre is committed to serving local, D.C. students and teachers and offers weekday student matinees, post-performance discussions and tailored lessons to complement educator curriculum. A limited number of free tickets to select weekday matinee performances are available to D.C. public and public charter schools, Title I schools, and schools that have 40 percent or more students eligible for Free and Reduced Meals. Schools located within the Capital Beltway may also qualify for free bus transportation. Ford’s Theatre offers a free workshop and free tickets to a preview performance of each of the company’s mainstage productions to Washington-area teachers before they bring their students. Since the program launched in 2009, more than 13,500 tickets have been provided to local students.

Carrie Watts dreams of escape from the bustling city and of a return to simpler times in her beloved Bountiful, Texas. She sets out on a risky journey to her beloved hometown, with her family in hot pursuit. Along the way, she encounters kindness and compassion, and makes a remarkable discovery about the true meaning of home. One of the foremost interpreters of Horton Foote’s work, Michael Wilson directs Nancy Robinette as Carrie Watts with Tom Story as her son, Ludie, and Kimberly Gilbert as her daughter-in- law, Jessie Mae. This classic American drama is a touching portrait of family, what we hold onto and what we leave behind.

Join the ghosts of Christmas Past, Present and Future as they lead the miserly Ebenezer Scrooge on a journey of transformation and redemption. Originally conceived by Michael Baron, this music-infused production captures the magic and joy of Dickens’s Yuletide classic. Acclaimed actor Craig Wallace returns to play Ebenezer Scrooge in a production heralded as a “rich visual and vocal treat” (TheaterMania) and “infectiously jolly” (The Washington Post).

This free public festival provides a preview of news plays in development with the first cohort of BIPOC (Black, Indigenous and People of Color) playwrights in The Ford’s Theatre Legacy Commissions initiative. These commissions seek to broaden the American theatre canon by fostering and developing playwrights, incubating stories about social justice and racial history and exploring the varied experiences of underrepresented characters and lesser-known historical figures and their contributions to American life. Highlights for First Look include public play workshops and staged readings of works in development by Pearl Cleage, Dominic Taylor and Rickerby Hinds.

Pearl Cleage is a playwright, novelist, poet and political activist. Her piece, working title Something Moving: A Meditation on Maynard, explores the life and legacy of Maynard Jackson, the first Black Mayor of Atlanta.

Dominic Taylor is a scholar of African-American theatre and a writer-director whose work has been seen across the country. His piece, working title Cell Surface, centers around the life of Ernest Everett Just, the first Black graduate of Dartmouth and author of the eponymous textbook Biology of the Cell Surface (1939), and his relationship with Roger Arliner Young, a woman scientist who was his assistant and collaborator.

Rickerby Hinds is a pioneer of hip-hop theatre. His play explores the story of Henry Box Brown, who was enslaved in Virginia in the 19th century and mailed himself in a wooden crate to abolitionists in Philadelphia for freedom. His play will feature music and projections and will be an exciting presentation for history and hip-hop enthusiasts alike.

The Ford’s Theatre Legacy Commissions are generously supported by Lead Underwriter Boeing with additional support from The Home Depot and KPMG LLP.

Learn about Lincoln’s assassination from two men who were there. This 35-minute stage play at Ford’s Theatre explores the key facts of the assassination while capturing the emotions of that fateful night in 1865, as told through the eyewitness accounts of actor Harry Hawk and Ford’s Theatre co-owner Harry Ford, among others. As they reconstruct the sequence of events, they grapple with the question: Could John Wilkes Booth have been stopped? One Destiny was honored with The Washington Post Award for Innovative Leadership in the Theatre Community in 2011, and celebrated its 1,000th performance in spring 2016. Performance dates and times for spring 2023 to be announced.

Join Detective McDevitt as he re-visits and re-examines the sites and clues surrounding the assassination of our nation’s 16th president. This outdoor tour lasts approximately two hours and makes at least eight stops. The distance walked is 1.6 miles from outside of Ford’s Theatre to the White House. Please wear comfortable shoes. Performance dates and times for 2023 to be announced.

Ford’s Theatre Society was founded under the guidance of executive producer Frankie Hewitt, who, during her 35-year tenure, established Ford’s as a living, working theatre producing performances that highlighted the diversity of the American experience. Since the arrival of Paul R. Tetreault as Director, critics and the theatre-going public have recognized Ford’s for the superior quality of its artistic programming. With works from the Tony-nominated Come From Away and the nationally acclaimed Big River, to the world premieres of Meet John Doe, The Heavens Are Hung In Black, Liberty Smith, Necessary Sacrifices, The Widow Lincoln, The Guard and Grace, Ford’s Theatre is making its mark on the American theatre landscape. Under the current leadership of Board of Trustees Chairman Phebe N. Novakovic and through the lens of Lincoln’s leadership and legacy, Ford’s today endeavors to advance Lincoln’s “unfinished work” with programs and performances that cultivate empathy, encourage dialogue and bridge divides in American life.