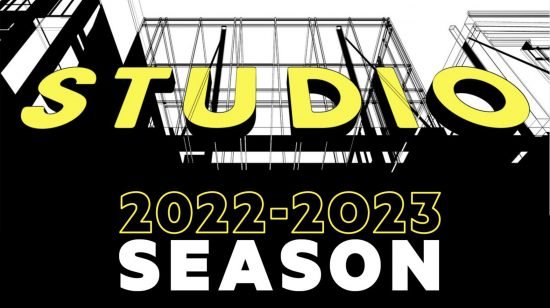 “Our upcoming season is intentionally eclectic, with intimate stagings that are a hallmark of Studio as well as sweeping ensemble productions that will challenge us to use our theatres in new and inventive ways,” said Muse. “I’m particularly thrilled for Studio to introduce our audiences to playwrights helping to shape the future of our field, like Sanaz Toossi, Will Arbery, and James Ijames, alongside peers who continue to innovate and create groundbreaking work.”

“For the last several seasons, our Open Studio campaign has been a driving narrative of Studio Theatre. After talking about it for so long and dreaming of the promise it holds, we’re thrilled to be able to show it off as we welcome audiences back to our finished building,” said Studio Executive Director Rebecca Ende Lichtenberg. “The plays in our 2022-2023 season are dynamic and topical, and the changes to our physical space will make the return to live theatre even more exciting for our patrons.”

The 2022-2023 season begins with Heroes of the Fourth Turning, a theatrical unicorn and Will Arbery’s breakout production that offers sensitive and dynamic insight into the Catholic right in America. The production grounds the characters and the Conservative movement in the near-present, and will be on stage just in time for the midterm elections. This intimate production is followed by Duncan Macmillan’s sweeping drama about addiction and recovery, People, Places & Things. David Muse directs this theatrical spectacle that will make use of all the technological sophistication and versatility of Studio’s new Victor Shargai Theatre.

Studio will present two new works that made a splash at their recent New York premieres, beginning with English by newcomer Sanaz Toossi in her Washington, DC debut. Her seriocomedy about language and identity follows four Iranian students studying for the Test of English as a Foreign Language and wrestling with what it means to be trading their native Farsi for a new language. Next, Studio will present its first production by two-time Pulitzer Prize winner Lynn Nottage with Clyde’s, a redemption story set at a truck stop sandwich shop and heralded as the funniest play to hit Broadway in quite some time.

A highlight of the 2022-2023 season is the Studio-commissioned play Good Bones, a new play by just-announced 2022 Pulitzer Prize winner James Ijames. An exploration of gentrification, displacement, and upward mobility, Good Bones focuses on a young couple renovating a townhouse in an unnamed city that bears an uncanny resemblance to Washington, DC. Good Bones will be directed by Psalmayene 24, extending a rich collaboration with Studio that includes directing Pass Over and working with the Theatre as a Doris Duke Artist in Residence.

The season concludes with Jeanine Tesori and Lisa Kron’s Tony Award-winning hit musical Fun Home, Studio’s first Main Series musical since its acclaimed production of Grey Gardens (2008). David Muse again is at the helm of this achingly beautiful story of a father-daughter relationship and the fraught road to self-acceptance. Adapted from Alison Bechdel’s pioneering graphic memoir about her childhood, Studio will scale the Broadway hit to its intimate theatres, magnifying the power of this bittersweet musical, and marking the first time that a local theatre company will have produced Fun Home (the Broadway tour played The National Theatre in DC).

Heroes of the Fourth Turning
by Will Arbery
directed by Sivan Battat
September 21 – October 23, 2022
Mead Theatre

On the edge of the Wyoming wilderness, the last guests linger late into the night at a celebration for the new President of their conservative Catholic college. Reunited after seven years, the friends toss back whiskey and name-check Thomas Aquinas, Hannah Arendt, Steve Bannon, even Bojack Horseman, tracking their distance from each other and the people they thought they’d be by now. Will Arbery’s portrait of conservatives trying to make sense of where they—and their country—stand is an incisive yet personal look at the intelligence and despair of the Catholic right.

Emma is an actress. She also has an addiction, and it’s trying to kill her. In rehab, but not ready for recovery, Emma just wants to escape—through drugs, through performing, through anything that lets her make her own reality. David Muse directs his first production in the new Victor Shargai Theatre, a theatrical tour-de-force that evokes the vivid and disorienting world of intoxication and lies as Emma decides whether to fight for her recovery and the people, places, and things she’ll face there.

“English Only.” It’s 2008 in Karjan, Iran and four adult students are studying for the Test of English as a Foreign Language, the key to their green card, medical school, family reunification. Playing out in awkward lessons of word games and mistranslation, English is both a comedy of miscommunication and a look at the ways speaking a new language can expand your world and change your voice. A hit in its 2021 New York premiere, Studio presents playwright Sanaz Toossi in her Washington, DC debut.

No one would accuse Clyde of having a soft heart: Sure she hires former convicts for the greasy kitchen of her truck-stop sandwich joint, but she knows what they owe her and holds that power tight. Her line cooks might be stuck, but their hopes haven’t flickered out yet, fed by tentative connections and a fierce competition to create the perfect sandwich. Pulitzer-Prize winner Lynn Nottage’s sweet and savory comedy trades in wonder, Wonder Bread, and the healing powers of food.

Aisha’s moved back to the block, but the neighborhood’s changed. She’s an urban planner, returning to her hometown, renovating a townhouse that’s seen better days. Aisha tries to convince her husband to spring for crown molding and endures the noise that blares from the street all night. But when their contractor is caught up in an act of violence a block away, Aisha’s homecoming becomes more complex than she expected. A Studio-commissioned play by 2022 Pulitzer Prize winner James Ijames, Good Bones explores gentrification and belonging, displacement and upward mobility, and being haunted by a legacy you’re only just beginning to understand.

Alison is 9, begging her father to play with her. She is 19, overcome by the aching and joyous pain of first love. She is 43, an out lesbian hunting for the truth of her brilliant, volatile, and closeted father’s life and death. She is all three at once, trying to untangle the central mystery of her childhood: How did she survive their shared hometown, when her father could not? With a score that ranges from exuberant 70s pop to aching melodies and dissonant harmonies of characters longing to be known, Fun Home is the Tony Award-winning story of a daughter and father, of coming out and coming to terms with a life shaped by a family’s secrets.

Studio Theatre is a longstanding Washington cultural institution dedicated to the production of contemporary theatre. Over more than 40 years and 350 productions, the theatre has grown from a company that produced in a single rented theatre to one that owns a multi-venue complex stretching half a city block, but has stayed committed to its core distinguishing characteristics: deliberately intimate spaces; excellence in acting and design; and seasons that feature many of the most significant playwrights of our time. Studio is a values-focused organization that pursues artistry and inclusion, and brings characteristic thoughtfulness and daring to our efforts, onstage and off. The theatre serves nearly 75,000 people each year, including more than 1,000 youth and young adults through community engagement initiatives. Founded in 1978, the quality of Studio’s work has been recognized by sustained community support, as well as 78 Helen Hayes Awards for excellence in professional theatre.