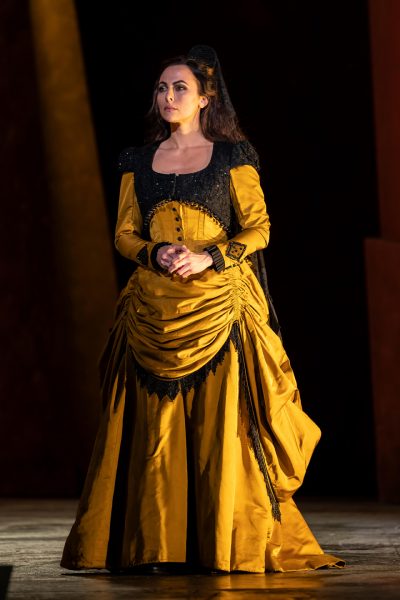 The Washington National Opera presented “Carmen,” one of the mainstays in the opera repertoire. With themes of love, jealousy, and fate, Georges Bizet’s work is both universal and sublime. It is, simply put, men and women at their finest and at their worst. The Washington National Opera followed the general plot faithfully, though also incorporates a few surprises. For example, at the beginning of the opera, we see a silhouetted Don José in prison, prefiguring later events.

A free-spirited Carmen, full of a passion which knows no boundaries, ensnares army corporal Don José’s heart. However, she ultimately rejects him for a flashier man, driving Don José to a mad passion which permanently changes his life beyond return.He deserts the military, leaves his earlier fiancé, and enters the life of exile from society.

Michael Fabiano, the tenor portraying Don José, plays his role to perfection. In beautiful voice, his young corporal is average-looking, earnest, passionate, and easily duped—the perfect “everyman.” He is chosen almost at random by Carmen, who throws her famous flower at him. “That flower hit me like a bullet!” he says as he falls for the tempestuous woman.

Isabel Leonard wonderfully embodies the many and varying moods of Carmen which range from angry to flirtatious, petulant to proud, and scheming to charming. She captures all of these moods, subtlety shifting from moment to moment, all the while beautifully singing some of the most famous music of “Carmen”—Carmen’s entrance and the Habanera.

Bass-baritone Ryan Speedo Greene plays the toreador, Escamillo. Filling the room with a grandiose stage presence, he makes his entrance on a white horse and sings the famous toreador song with gusto. “Micaela’s Air,” sung by the woman Don José has left for Carmen, was delivered poignantly by soprano Vanessa Vasquez. The audience responded enthusiastically to the chorus of street children and the pageantry of costumes associated with the bullfight in the final act of the opera.

The set was simple, almost spartan, with the emphasis of an earthen brown color scheme and utilized in multiple ways. It represented the exterior of a cigarette factory; Lillas Tastia’s tavern; a robber’s hideaway; and the exterior of a bull-fighting arena where the denouement of the opera takes place. It also served as backdrop for the projected shadows of the dancers, enlarging the spaces of the stage to give the effect of an even larger cast. Yet, at other times, it suggested the claustrophobic inescapability of fate, for death is read in the cards by Carmen over and over again.

Exotic orchestral color provides life to the production with its Spanish and Romani flavors. The conductor, Evan Rogister, tapped into the Spanish orchestral flare as well as traditional opera music very effectively. This production was directed brilliantly by Francesca Zambello. Audience members enjoyed many of the famous melodies which have become some of the most famous pieces in classical music. Bizet’s lively melodies such as “Seguidilla: Près des remparts de Séville” and “Les tringles des sistres tintaient” made this show a pleasurable night of entertainment, even apart from the thrilling plot of “Carmen.”